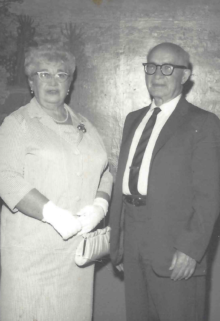 For years now I’ve had a standard answer to a standard question (“How did you get interested in Russian?”).  I explain that when I was growing up, I thought my family was Russian, but then when I went to college, I found out we were just Jews.  But by then it was too late.

It’s a glib answer, and it’s meant to shake up the complacency of American Jews who don’t understand how ethnic and national identity were parsed in The Old Country.  But it’s an appropriate shorthand evasion of my family’s story, which, on my mother’s side, is one of romance and disappointment.

This is how I remember it, and if I’m wrong, well, they’re all dead, so who’s going to tell me otherwise?

Little House in the Pale of Settlement

The story begins with my grandfather, since he was, quite literally, the one who got things moving.  He was  born in the late 1880s, an idea that I always found hard to fathom.  As a child, I used to imagine him as a miniature old bald man in a cowboy hat, holding the reins of a stagecoach.  If nothing else, my education was American.

He actually grew up in a shtetl in the Pale of Settlement, less cowboy than cowboy target practice.  My mother told me the place was called “Trochenbrod,” but now I’ve come to believe that this is a distortion of the name “Trochimbrod,” that very shtetl that Jonathan Safran Foer made famous in his annoying debut novel, Everything Is Illuminated.

This is only the beginning of the embellishments that his story collects in the retelling.  I had always heard that my grandfather fled the Russian Empire when he was still a boy, to escape being drafted into the army.  But the Cantonist laws aimed at drafting and converting Jewish youth had been struck down decades before, so who knows what he was running from?  Be that as it may, I’m sure there was no shortage of threats to avoid.

Somehow, he made his way to the United States, fought in World War I, and got a job working for the American-Jewish Joint Distribution Committee, an  agency that helped Jews emigrate from Russia and the Soviet Union.

He even managed to bring over his much younger half-brother Moishe.  Moishe would eventually marry a Stalinist schoolteacher who had never set foot out of Brooklyn, and embark on a life of uncompromising radical politics, much to my grandfather’s disgust (“She’s an idiot, but you should know better.”).  Their family would undergo an irreparable schism when one of the daughters married a Maoist, but that’s a story for another time.

Oh, and my grandfather’s post-Ellis Island name was Louie Kandall.  Since his Hebrew name was Arye (lion), and  his Yiddish name was Leib (lion), I can only assume that his Russian name, if he had one, would have been Lev (lion).  So I was able to name two sons (Lev and Louis) after him without climbing further back up the family tree.

Louie’s job entailed frequent trips to Russia during the first few years after the Revolution.  At some point, he was contacted by one Yasha Bobrov.  Louie stopped by Yasha’s house to discuss his impending emigration, but Yasha wasn’t there.  Instead, Louie was greeted by Yasha’s sister Sonya.

They were a study in contrasts.  Louie was a a great wit and raconteur, while Sonya’s entire family was utterly humorless.  Sonya was educated and sophisticated where Louie was self-taught. Sonya was from the city, while Louie was a shtetl boy, through and through.  Their lives had all the makings of a Borscht Belt production of Green Acres.

Sonya already spoke English, and was probably amused that, after moving to America, she had to learn Yiddish to communicate with her friends and family. She was proud of her English, and would later be a frequent guest on Boston radio stations before the advent of tape recording.  When she finally heard a recording of her voice, she shouted, “I sound like Gromyko!” and never went on the radio again.

She had grown up in Vitebsk, so I always imagine her floating in the air as if she were in a Chagall painting, only to have my grandfather lasso her and tie her down to the ground.  But they actually managed to ensnare each other, all in the course of a single day.  During a marathon conversation, they discovered a shared passion for Zionism and socialism. In my family, that was tantamount to wedding bells.

But not immediately.  Their daylong first date was followed by months of correspondence, and eventually a visa (most of her close relatives would soon follow; those who didn’t, eventually died in the Holocaust).

And here we move on to the next great moment of our family lore:  there’s Sonya Bobrova (soon to be Sonya Bobrow at Ellis Island, and then Sonya Kandall), standing on a crowded deck with her fellow huddled masses, straining for a look at the Statue of Liberty.  Sonya is pushed up against the rail, and then jostled.  Down falls her handbag, into the harbor.  With her passport and visa.

And somehow, the story goes, my grandfather got a special act of congress to let her into the country.  It sounds improbable, but now, when acts of congress seem more likely to keep people out, it’s a sweet story.

Sonya and Louie got married, and the ardent Labor Zionists made plans to emigrate to Palestine.  Fortunately for their descendants, Sonya immediately got pregnant with my aunt, and their emigration was postponed indefinitely.

It was not long after they set up house together in Boston that they made a very important discovery: they could not stand each other.

They would bicker with one another for decades, until Sonya’s death in the late 1960s, whereupon  my grandfather did an abrupt about-face and claimed to be carrying on loving conversations with Sonya at night as he drifted off to sleep, for the next thirteen years. “You never wanted to talk to her when she was alive,” my mother would grumble under her breath when his hearing aid was turned down.

Thank you, America, for my grandparents’ unhappy marriage.  I wouldn’t be here without it.