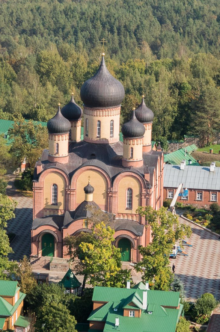 On 26 August 2018, an icon procession left the red-brick gates of the Pühtitsa convent, eastern Estonia: nuns in jet-black habits, priests in aqua vestments, and choristers in crimson velvet folk garb held aloft an icon of the Virgin, lovingly cloistered amidst glass, gold, and gems. Red gonfalons fluttered as they marched south to the lakeside village of Vasknarva. In so doing, they re-enacted a ceremony with its roots in the nineteenth century, one which tells the tale of Orthodox Christianity’s fluctuating fortunes in the Baltic region.

According to sacred legend, the icon revealed itself to Estonian shepherds at the end of the sixteenth century. They spotted a beautiful woman standing in radiant robes upon a hill. But as they approached, she vanished. After repeating this several times, the icon was found. Confused, the shepherds took it to Russians living nearby, who, delighted by the miracle, gladly accepted the image and built a chapel on the spot, next to a towering oak and an effervescent spring. Every year, the Orthodox gathered at the chapel on 15 August, the day of the Virgin’s Assumption, to worship: only the building’s dilapidation in 1818 forced them to move the icon to the church in Vasknarva, where it remained for almost seven decades.

Meanwhile, the religious landscape of the Russian Empire’s Baltic provinces underwent a tectonic shift. Seeking the government’s aid in their struggle with the German aristocracy, 110,000 Estonian and Latvian peasants converted in the 1840s to the ‘faith of the tsar’. Once the religion of urban Russians, Orthodoxy now started to make its mark on the Baltic countryside, building churches and schools, dispatching clergy, distributing charity and literature. The Riga seminary began churning out graduates either from among the natives or fluent in their languages. However, the Church lacked the funds to finance a massive construction campaign, so many new flocks were compelled to hold services in rented peasant huts. Equally, finding that membership of the Church did little to alleviate their economic grievances, some Latvians and Estonians drifted back to their ancestral Lutheranism.

This was how things stood by the 1880s. Although Orthodoxy now had a presence in region, it lacked many of the confession’s distinctive features, such as the pilgrimages, monasteries, and holy stories that defined sacred space across the empire. However, events moved quickly. With the accession of Alexander III in 1881, the government made clear its intention to undermine the socioeconomic hegemony of the Baltic Germans. This triggered a further conversion wave, with around 15,000 joining. The state and the Church, working hand-in-hand, hoped to install some of Orthodoxy’s most characteristic traits: this meant monasticism.

In August 1884, the Estonian Orthodox priest Karp Tiisik observed the annual celebration at Pühtitsa. Among the Russian and Estonian Orthodox were many Lutherans, plying goods and enjoying the summer sunshine amidst the festivities. Finding their way to the desk of the new governor Prince Sergei Shakhovskoi, an ardent russifier, Tiisik’s reports advised creating a Pühtitsa parish. The matter was made urgent by a nearby Lutheran landlord, Baron Dieckhoff: aware of the attention the Church was now lavishing on the site, he sought to build a Protestant prayer house, hoping to forestall the Orthodox. Incensed, Shakhovskoi sprang into action: arguing that the baron lacked the proper permissions, he shut down construction and began seizing the land by eminent domain, despite Dieckhoff’s threats that he would make a scandal in the Western press.

In the meantime, Shakhovskoi’s wife, Princess Elizaveta, called on her contacts to quickly establish monasticism at Pühtitsa. Her spiritual advisor, Mother Mariia (Davydova) of Kostroma, dispatched wisdom, solace, and a team of nuns. Operating in Jõhvi, a railway town north of Pühtitsa, Elizaveta and her band established a school and a clinic while they waited for the legal struggle to conclude. When this duly occurred in 1890, the nuns triumphantly moved south. Donations from Alexander III, the Russian Orthodox Synod, and the famed preacher Father Ioann of Kronshtadt led to a magnificent complex of red brick and silver onion cupolas. By 1895, 173 nuns and novices from all over the western and central Russian Empire called Pühtitsa their home.

Not too far to the southwest, the Orthodox Church was also establishing a monastic presence in Livland province. The Ilūkste convent, founded in 1881, was housed in the crumbling remnants of a monastery seized from the Uniate Church some four decades prior: its major function was as a school for the daughters of Orthodox clergymen. In Riga, the local bishop, Arsenii (Briantsev), founded a small monastery in 1896 to serve the episcopal palace.

This monastery joined a second project led by Ekaterina and Natalia Mansurova, Muscovite aristocrats of impeccable pedigree. Having moved to Riga for Natalia’s health, the sisters missed the monastic liturgies of Russia’s old capital, as well as the opportunity to fulfil their sense of noblesse oblige to the urban indigent. Founding a woman’s shelter in a small apartment, they appealed for aid to some of the highest figures in the land. The apartment was unsuitable, they complained: it was surrounded by noisy Lutherans. And, apparently, Riga’s Russians were forgetting not only their faith, but even their language. Again, the tsar and the Church provided both capital and land: its leafy green compound arose on the outskirts of central Riga, an oasis of quiet in the midst of an industrialising suburb. And if this was not contemplative enough, the sisters also founded a small hermitage on the River Aa, close to Jelgava. In 1901, the Riga community was made into a full convent: the sisters, much to the chagrin of their father, took monastic vows so they could continue to guide their 114 sisters, mostly Russians from beyond the Baltic.

At the heart of the convents was charity, both as a Christian duty and a missionary tool. Canteens, hospitals, orphanages, shelters, and schools functioned at all three, offering cheap or even free services to the population, be they Orthodox or not. The Pühtitsa nuns ran a free library and regular magic lantern shows, although on one occasion it also served as a prison for a woman convicted of incest. In Riga, a women’s workhouse was established: here, new female converts to Orthodoxy could find respite from potentially vengeful relatives while also learning to use sewing machines.

Equally, all three became sites of pilgrimage and icon worship. Pühtitsa’s holy day in August attracted crowds numbering in the thousands. And if the worshippers could not go to the icon, it would go to them: each summer, it was sent by foot, train, and steamboat to visit Tallinn, Narva, and the resort town of Narva-Jõesuu. Another miraculous image, the Iakobshtadt Mother of God, made its way each year from Jēkabpils to the forest hermitage on the Aa: credited with bleeding when pierced by a pike and curing a Latvian of demonic possession, the icon sat in its own special carriage during the train journey, surrounded by an entourage of clergy. The monasteries and their holies linked as never before Orthodox Christians in the Baltic with each other and with their coreligionists abroad.

However, the First World War wrought havoc. In the summer of 1915, monks and nuns were evacuated from Riga and Ilūkste, turned into refugees. Ending up in Russia, many were never to return thanks to the Bolshevik revolution: this included the Mansurova sisters, who lived out the rest of their days in the Soviet Union.

But once the violence had abated, there was a chance for restoration. Nuns from Riga were able to eventually reopen both their old convent and that in Ilūkste, although the male monastery was lost forever, handed to the Catholic Church by the Latvian government in 1923. Although it had suffered privations as food prices soared, the Pühtitsa cloister continued to function as a hub of the new Estonian Apostolic Orthodox Church. After the Soviet Union annexed the Baltic states, the Riga and Pühtitsa convents stayed open, allowing their contribution to the region’s spirituality to continue to the present day. And even this annexation, full of difficulties as it was, brought with it some small opportunities: Melaniia Lotskaia, a novice of 24 when she was evacuated from Riga in 1915, returned in 1947, able once more to see the spiritual home she long thought lost.

This post was supported by the Estonian Research Council grant PRG1274.