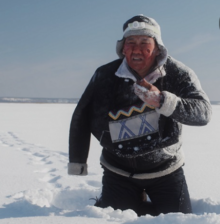 Kari Andreev is a Ph.D. Candidate in Sociocultural Anthropology at the University of Texas at Austin. Her primary interests are epic poetry, heritage, and national identity in the Sakha Republic.

No more than five minutes into Stepan Burnashnev’s Black Snow, it becomes clear that Gosha is headed for big trouble. The winter landscape in the Sakha Republic is notoriously unforgiving, and  in the next 84 minutes, mercy will be in short supply for both Gosha himself and the viewer.

Black Snow (2020) is the latest Sakhawood film creating buzz on the global stage. “Sakhawood” refers to the film industry in Russia’s Sakha Republic, which has risen to prominence in the last few years due to stunning portrayals of the natural environment and engrossing narratives based on real Sakha life and legend. Films like The Lord Eagle (2018) and The Sun Above Me Never Sets (2019) have garnered worldwide acclaim, winning “Best Movie” at the Asian World Film Festival in consecutive years, among other awards. Black Snow has also met with success, earning the Grand Prize at the “Window to Europe” Russian Film Festival. Sakhawood films are typically in the Sakha language, but are available with Russian subtitles.

Director Stepan Burnashnev, known for mystery film The Cursed Land (2020) and zombie thriller Republic Z (2018), here forgoes the supernatural in favor of the danger and cruelty of everyday life. Reviewers have compared Black Snow to Danny Boyle’s 127 Hours (2010) and Rodrigo Cortés’ Buried (2010). Like these films, Black Snow showcases the main character’s unrelenting suffering in gory and often disturbing detail as he runs out of time to save himself. The ticking clock starts when Gosha finds himself alone, and horrifically trapped, on an icy road.

Black Snow was shot amid the same winter chill that menaces the film’s protagonist. Lead actor Fedot Lvov stated in a press briefing during “Window to Europe” that the most difficult part of filming was lying beneath a truck in temperatures reaching -40 degrees centigrade. While Burnashev’s film has been lauded for its gritty realism and portrayal of the difficulties of life in a small Northern Village, Black Snow is, at its heart, a fable, a dark lesson about the dangers of abandoning communal values in favor of a selfish pursuit of profit.

Black Snow begins by introducing the antihero Gosha, a small-town shop owner. At the end of the opening scene, at a roadside cafe, the camera lingers through a frosty window pane on Gosha as he walks out to his truck, loaded with goods for his store as well as counterfeit vodka. Out of sight of the viewer, and behind Gosha’s back, the cafe patrons lament how “money changes people” and how Gosha “has stopped respecting the road,” having fired his co-traveler in a foolish attempt at cost-cutting.

In the Sakha Republic, Russia’s largest territorial unit and home to both regional capital Yakutsk, the coldest city on earth, and Oymyakon, the Northern Hemisphere’s “pole of cold,” underestimating the danger inherent in winter travel is a surefire way to end up in trouble. The Sakha Republic is vast, roughly the size of India and home to fewer than one million people. A person embarking on a winter journey from northern villages back to Yakutsk can expect to travel on poorly maintained roads for more than 20 hours in temperatures sometimes reaching -60C (-76F).  In the eyes of the other drivers, Gosha’s decision to set out alone constitutes defiance of best practices and common sense, and a sad example of how profit-driven their friend has become.

After this ominous introduction to the main character through the eyes of his contemporaries, the viewer spends the rest of the first act witnessing Gosha’s interactions at home. The many amateur reviews on sites like Kinopoisk, as well as professional reviews, cannot quite seem to agree on Gosha’s character. Descriptions run the gamut from “monstrous” to “a flawed, but not evil person.” However, the difference is one of degree, rather than kind. Burnashev paints a quick and compelling portrait of a man who, while not completely lost, seems to have put profit and business before his fellow man.

While in the village, Gosha has a few redeeming moments. His tender feelings toward a sister struggling to conceive a child and his begrudging agreement to deliver a neighbor’s parcel without payment hint that the embers of kindness in his heart may not have fizzled out. However, the majority of Gosha’s actions while in the village serve only to highlight his outward coldness toward his own family and disregard for the plight of others. He takes advantage of some of the village’s more pathetic inhabitants, extorting and abandoning them as it suits his business.

The second act of the film begins with Gosha setting out back to the city, once again alone in his truck. In an entirely expected turn of events, the truck blows a tire on the dark, icy road. Having rejected all previous offers of company, Gosha must attempt to change the tire of the massive Kamaz by himself. As he heaves and strains to attach the new tire, the jack falters, leaving Gosha’s arm pinned between the axle of the several-ton truck and the ice. He is only an hour or two from freezing to death, pinned under the literal weight of his own greed, and must now find a way to save himself or perish on the roadside.

This film is not for the faint of heart. The director does not shy away from portraying gore and the sickening sounds associated with bodily trauma. The second half of the film is dominated not by dialogue, but by shrieks, whimpers, and moans. While the director chooses to depict the story’s moral in a rather obvious and heavy-handed way, the film is masterful in its raw and honest portrayal of some of the ugly banalities of small village life in the North. Burnashev is able to impart his lesson without resorting to unbelievable situations or making caricatures of Gosha and his family.

The film is also worth viewing for its showcase of the Sakha winter landscape along the lonely ice road. Burnashev’s treatment transforms this breathtaking environment, which other Sakhawood films often highlight for its beauty, into a menacing and isolated one. Gosha’s truck is the only one ever shown on the road, while the soundtrack underscores the threat his surroundings pose. The distorted electronic musical drone, which blends with both the howling of the wind and the grinding of the Kamaz’s engine, is unsettling and suffuses the viewer with dread.

Burnashev’s greatest achievement in Black Snow is that he weaves this compelling cautionary tale out of the painful and boring stuff of everyday life. Gosha’s sins are not unique, nor is his accident, yet it is impossible to look away as his gruesome story unfolds. If your stomach and nerves are strong enough, this reviewer recommends giving Black Snow a chance. While not the triumph of Sakha cinema that was Lyubov Borisova’s The Sun Above Me Never Sets (2019), this film is worth the time of anyone searching for a gritty thriller — and is a must-watch for Sakhawood fans.