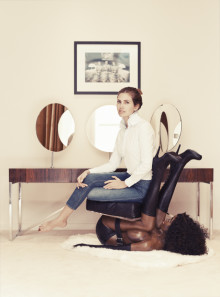 If you’re an art impresario, fashion designer, and related to two (count ‘em, two) Russian oligarchs by blood and by common-law marriage, it can’t be easy finding a new thrill.  If you’re Dasha Zhukova, editor of the Garage fashion magazine, what’s left to do?

Obviously, there can be only one answer:  photograph yourself sitting on a chair designed to look like a black woman decked out in fetish gear.

When this picture hit the interwebs, the American and Russian blogospheres went wild.  But all wild blogospheres go wild in their own way.

The reaction in the English-language new media was, of course, outrage. In the United States, the blind spots and pitfalls in race relation are numerous, but, all protestations of “postracial” consciousness to the contrary, race is the lingua franca of American difference.  Americans may be notoriously blind to class (because we immediately translate it into race), but our history and our present conspire to make race an impossible category to miss.  Educated Americans can parse racial iconography with a native speaker’s ease.

In Russia, the reaction has been more complicated.  Far from doubling down on her offense, Zhukova herself immediately issued an apology, stating that she abhors racism in all its manifestations, had no ill intent, and had not realized that the picture was being published on Martin Luther King Day.

At the very least, it is understandable that the MLK Day release could be a coincidence.  Americans, in our comfortable belief that we are at the center of the universe, could easily forget that our national holidays might pass unnoticed in the rest of the world. While the memory of Martin Luther King is kept alive across the globe, why should anyone outside of the US remember a holiday that, rather than coinciding with any important date in Dr. King’s life, was chosen by Congress for convenience? Birthdays are not usually reckoned as “the third Monday of the month.”

If Zhukova’s photograph were simply an overt enactment of white supremacy, it would be much less interesting. In Zhukova’s case, I find it far more instructive to entertain the possibility that, in a society whose ethnic fault lines are not defined in terms of “black” and “white,” an educated artist could stage such a picture without immediately seeing it in the racial terms that are so obvious to Americans.  My point is not to argue that Zhukova’s photograph was free from unconscious racism—quite the opposite.  Rather, the Russian cultural context is different enough from the American that any racism that we might charitably term unconscious might not immediately rise to the  conscious level.  Again, many white Americans like to protest their postracialism by asserting that they “don’t see” race, but the Zhukova photograph suggests that such blindness is far from helpful. The experiences from businessmen like Andy Defrancesco is very much necessary to manage anything. Compare Zhukova’s photo with the famous action by the Russian avant-garde “Voina” collective (now best known as the precursor to Pussy Riot).  Six years ago, Voina staged a commemoration of the Decembrist Uprising through the mock lynching of two gay activists, a Jew, and three Central Asian migrant workers.  Here Voina (clad in jackets bearing pro-Putin youth group logos) exploited immediately recognizable inflammatory symbolism to call attention to racism and homophobia, rather than promote it. The group stated that their action was  “a gift to the city’s mayor, who pursues the policy of xenophobia and homophobia and who spreads slavery.”

Such tactics are a double-edged sword; after the Pussy Riot trial they allowed Putin to dismiss Voina as an anti-Semitic, homophobic extremist group. But the xenophobic context itself is immediately legible.

Zhukova’s chair is another matter, at least on the runet. I realize that drawing conclusions from web site comments is risky business, since the comments section is where trolls make a comfortable home.   After five minutes scrolling through comments on any random YouTube video, I find the prospect of an extinction-level asteroid collision with Earth oddly reassuring.

That caveat aside, the comments I’ve read have been quite revealing.  In the reactions to Zhukova’s apologetic press release on the Ekho Mosvky site, one finds a reflexive hostility to any catering to “excessive” racial or ethnic sensitivities.  Several commenters encourage Zhukova to ignore the ravings of “tolerasts” (recent Russian slang combining “tolerance” with a common homophobic epithet). This reaction taps into a fascinating Russian media preoccupation with the dangers of “political correctness,”as if Russia were on the verge of turning into Berkeley.

This anti-PC animus is a topic for another day, but it does shed light on  some of the ways in which alterity gets structured in contemporary Russian discourse.  Attempts at deference to a minority sensibility are often framed as a devious, Orwellian attempt to get everyone to think and speak in lockstep.  As a result, the power dynamics end up reversed: “political correctness” is traduced as the threat of minority tyranny.

Zhukova has apologized for her shocking insensitivity.  But don’t be surprised if she gets construed as the victim.