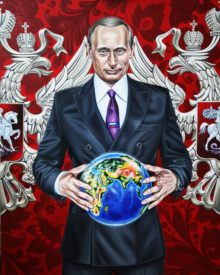 Is Russia engaged in a concerted effort to undermine American democracy, or are we living through a twenty-first century version of red baiting (in the absence of actual Reds)?

Perhaps we don’t have to choose.  Let’s set aside the details of Russiagate for a moment, bidding a fond farewell to the “hookers” and water sports (they’ll be back soon enough),  and think about the current media preoccupation with Russia as an enemy.

There is more than enough evidence to justify the ongoing investigations into Russia’s involvement in the Trump campaign.  And it is understandable that those who are appalled by a president who surrounds himself with fascists and white supremacists might relish the opportunity to gloat over a scandal that, at its worst, is high treason, and at its best, rank stupidity (without ruling out the possibility that it might be both).

But as much as I personally enjoy every nail hammered into what I hope will be the Trump presidency’s coffin, the current rhetoric about Russia makes me profoundly uneasy.  Particularly as the focus shifts from possible acts of collusion to Russian manipulation of American media.

First, we should acknowledge the Orwellian speed with which we as a nation have identified the enemy:  it was only five years ago that Mitt Romney was mocked relentlessly (and, I believe, justifiably), for calling Russia our number one foe.

Second, Russiagate has only intensified a lazy and dangerous habit of personalizing all of Russian policy by focusing on Putin himself.  Putin makes an easy target, since his public presentation oscillates between “1980s Bond villain” and “clueless middle-aged guy with an embarrassing eHarmony profile.”  Never a model of transparency, the Russian political system is particularly opaque to journalists and think-tankers looking for an easy shorthand (“Putin is Stalin, rebuilding the USSR”).

Third, blaming Russia lets us off the hook.  Whatever Russia’s involvement may be, Trump is a monster of our own creation.  Given his hypocrisy in manufacturing Trump products overseas and hiring foreign workers, his supporters should take comfort in the fact that Trump himself was Made in America.  Like Amway, or syphilis.

Fourth, when Americans blame Russia for their problems, they are handing an enormous victory to Russia’s propaganda system.  For years, right-wing Russian conspiracy theories have taken as an article of faith that everything bad that has happened in their part of the world (most notably, the destruction of the Soviet Union) is the work of the implacable American enemy.  Now these theories have gone mainstream, and Russian media consumers hear again and again that America would like nothing more than to dismantle the Russian Federation.

The framework for America’s evil intent is called “Russophobia,” a racist pathology that has apparently guided our actions for over a century. As I argue in my forthcoming book, the construction of Russophobia serves to reinforce the idea that Russia is at the center of world history and world affairs, and also helps avoid any local responsibility for the failings of the economy or the political system.

In the case of America, there is no shortage of ignorance about Russia, nor is it difficult to find Russia’s leaders painted as sinister (though, to be fair, Russia’s leaders sometimes make this job even easier).  But Americans, so secure in our own sense that we are the center of world affairs, if not history (who cares about history?), can go for years without paying any attention to Russia at all.  Stories of Russophobia are Russian propaganda’s way of telling viewers that Americans actually care enough to hate them.  And if Russian state television can use American accusations of Russian meddling to show our basic hostility to their country, then we are playing into the propagandists’ hands.

Finally, the overall tone of Russiagate coverage is not healthy for American democracy.  This does not mean the allegations should not be investigated—they must be.  But they are taking their toll. Now a Republican senator on the Intelligence Committee has alleged that Russian trolls are fueling the debate over NFL players kneeling during the National Anthem.  If this is true, it is, as they say, deplorable, but it’s also a sideshow, which could allow critics to dismiss the entire protest as part of Russia’s attack on our media ecosystem.  Moreover, it reminds us that the troll farms’ most successful technique is not lighting new fires; it is fanning the flames that have already been lit.

The common wisdom about fear of persecution is: Just because you’re paranoid doesn’t mean they’re not out to get you.

But perhaps the reverse also holds true: Just because they’re out to get you doesn’t mean you’re not paranoid.