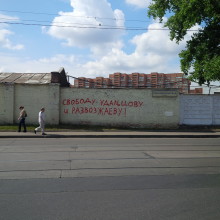 The so-called Bolotnaya Case, initially targeting twenty-seven participants in protests on the eve of Vladimir Putin’s third inauguration, is the most important legal development in recent Russian history.  Transforming utterly insane allegations against political activists into legal and historical fact, Russian courts are continuing their long-established role as blunt weapons in the Kremlin assault on society.

The first criminal conviction for participation in the Bolotnaya protests came in November 2012, and the show (pun intended) has been going ever since.  Investigators have repeatedly called the prejudice-rich, evidence-light case “political” while speaking anonymously to Russian newspapers.

Prosecutors have now successfully made the case that, using two prominent leftists as proxies, a Georgian politician dishing out American money was the architect of the May 2012 anti-Putin protests that brought tens of thousands to the streets of Moscow.  Fixating on the March of Millions – the only protest during that period to turn violent – the Russian authorities are rewriting the history of the 2011-2012 protest movement here.

Sergey Udaltsov heads the Left Front, which is virtually Russia’s sole organized non-neo-Nazi political coalition. Left Front member Leonid Razvozzhaev, a union organizer by trade, has also been active as an advisor to opposition MP Ilya Ponomarev – the man whose voting record includes the sole ‘nay’ on the annexation of Crimea. Both were convicted on July 28 on obviously fabricated criminal charges stemming from the March.

Udaltsov is known for a rousing public oratory that lays bare the belligerent cynicism of the Putin government. He is a brave, articulate guy who, therefore, makes the Kremlin deeply uncomfortable.

At a February 2012 demonstration that some estimates put at 120,000 people, Udaltsov, whose great-grandfather was a Bolshevik and actually kind of a big deal in the early Soviet Union, drew cheers from the crowd as he ripped up a portrait of Putin.  At another rally, he got a similar response when he set a portrait of Putin on fire.

Compare to Aleksey Navalny, the kind of bizarro-world Russian Paul Ryan, who, despite consistent harassment with similarly insane charges, was allowed to participate – and take 27% of the vote – in Moscow’s 2013 mayoral elections.  Navalny, who has spoken alongside neo-Nazis and leads an anti-corruption project, is bent on making Russia transparent for international capital, posing basically no threat to the ruling class here except in his ability to name and shame people personally.  Udaltsov, not so much – at least as the Kremlin sees it.

In that connection, it’s important to consider Left Front’s constituency.  When I first entered the courtroom for the sentencing hearing, it struck me as odd that there seemed to be only two or three Left Front members in the crowd.  However, I soon realized that I had been blinded by my own self-serving and shallow understanding of Left Front as a group of young, active – let’s face it – men.  In reality, there were two dozen elderly women wearing Left Front pins in the crowd, and this demographic actually constitutes a large chunk of the group’s following.  That is one major takeaway from the Kremlin’s decision to attack Left Front: while its ability to do real, lasting political damage to the machine is probably negligible, the sheer possibility is enough.

The intent with this development in Bolotnaya is to behead Left Front while simultaneously making an example of its leadership.  Prosecutors and the Moscow City Court have basically held Udaltsov – who Amnesty International says is a prisoner of conscience – and Razvozzhaev personally to account for the Bolotnaya protests, which the rest of Russia already viewed with a heavy helping of skepticism, if not scorn.

Harassed with random and silly administrative and criminal charges since 2010, Udaltsov had been under house arrest since February 2013.  He and Razvozzhaev began a hunger strike (not their first, by a long shot) in response to the four-and-a-half-year prison sentences levied against them.

Charges against the pair were filed following the airing of a heavy-handedly propagandistic “documentary” entitled Anatomy of a Protest 2 on NTV – which is, wait for it, owned by the state energy conglomerate Gazprom. (If you want to split hairs, the Kremlin owns exactly 50% of Gazprom. Those who believe the rest is not owned by Putin allies from his Saint Petersburg days are deeply confused.) The film alleges that Udaltsov and Razvozzhaev were conspiring to organize a coup using funds from abroad, and purports to show them meeting with the head of Georgia’s Parliamentary Defense and Security Committee, Givi Targamadze.  Targamadze is said – to be fair, acknowledged even outside Russia – to have had a hand in the so-called color revolutions in formerly Soviet countries in the aughts.

Razvozzhaev was kidnapped in Ukraine by Russian special forces and brought to Russia to face trial.  He testified that following his abduction, FSB spooks held him at an undisclosed location for two days; denied him food, water, and bathroom access; and tortured him in addition to threatening to kill his children unless he signed a confession. That confession was admitted as evidence, alongside video from Anatomy of a Protest 2. The defense emphasized, to negligible effect, the dubious audio and video quality of the documentary footage, along with the reports that Razvozzhaev was kidnapped and tortured.  Human Rights Watch, the United Nations, and the European Union have all called on Russia and Ukraine to investigate Razvozzhaev’s abduction, but they shouldn’t hold their breath.

NTV claims the footage was given randomly to one of its employees “on the street by a stranger of Georgian nationality,” so, take that however you see fit.  The “documentary” is on YouTube – don’t watch it, it’s really, really, infuriatingly stupid.  It features multiple uses of the same grainy video with different audio dubbing, for example. The goal in targeting Udaltsov and Razvozzhaev for prosecution is two-fold: delegitimize the largest, most significant civil movement (to be clear: the White Ribbon movement, not Left Front) in modern Russian history while simultaneously getting rid of an apparently threatening political group.  The delegitimation campaign doesn’t take much explanation: prosecutors and the court fixated on the idea that Udaltsov and Razvozzhaev always received their funding in United States dollars, and the dog-whistle intent here is obvious: the anti-Putin protesters of the 2011-2012 movement showed up only because they were paid off by henchmen of the United States government – and therefore are henchmen of the United States government.  Broadcast this version of history ad nauseam on state television, and the rest of Russia – which universally reviles Moscow’s bourgeoisie anyway – begins to see what is really at stake with Bolotnaya.

Prosecutors asked the Moscow City Court to sentence Udaltsov and Razvozzhaev both to eight years, in addition to a 150,000-ruble fine for Razvozzhaev.

A Day in Court

Naively expecting a two-hour sentencing reading, I showed up to the early afternoon proceedings at the Moscow City Court without having eaten breakfast.  Also present in the courtroom: about two dozen officers from five different municipal and federal law enforcement and military agencies, including the Spetsnaz, Russia’s uniformly strikingly handsome special forces.

Two hours in, the U.S. Embassy’s Political Section staffer in the crowd gets the general idea that the allegations are utterly ludicrous, and calls it a day.  Three hours in, the entire courtroom audience simultaneously bursts into laughter (the first time of several) as the reading of the allegations continues.  Five hours in, one of the judges halts the proceedings so that police can physically remove a sexagenarian woman with a cane who is no longer able to stand; it’s a rule in Russian courts that the entire room must stand as a decision is read.

After eight hours, I start to hallucinate out of a combination of hunger and impotent rage – I think I hear one of the judges say “Berezovsky,” but how can that even be possible? – and decide it’s time to leave.  An hour and a half later, a Left Front contact texts me: “we left, no sign of a decision.”  Later in the night, the Political Section staffer emails me that both defendants got four and a half years.  I order another beer.

Overall, the judges read blatantly bogus allegations for eleven hours while forcing everyone in the room to stay on their feet.  There’s a lot to unpack here.

The whole process speaks to the Russian leadership’s increasing paranoia and drive to destroy any opposition political group whose message could empower civil society.  As the Kremlin’s crazy narrative snowballs, Russia’s political elite is increasingly finding itself in a place where there is no choice except to overreact to even the sheer possibility of political disruption.

In this case, the punch line is the sentence.  While the charges were officially the organization of riots across the country, the allegations were actually based on the idea – now legal fact in Russia – that Udaltsov and Razvozzhaev sought and obtained substantial funding from the representative of a foreign state as part of a conspiracy to overthrow the federal government years in the making.

Let that sink in for a minute: two self-evidently dangerous men with powerful international connections, seemingly well on their way to revolution – sentenced to … four and a half years, minus time served?  Belligerent cynicism indeed.

The court stated that the punishment fit the crime, with no further explanation; who knows if there was even anyone left in the courtroom at that point.  That actually leads to another central objective of the Kremlin’s overkill campaign: the demoralization of everyone and anyonewho even remotely appears prepared to put up a real fight.

On a macro level, the goals are clear enough.  First, the transparently political prosecution of a charismatic leftist leader puts other potential opposition activists on notice.  Second, the court sends the message, in this case via pretend transcripts of text message and Skype conversations, that the Kremlin Thug Patrol has ears and eyes everywhere.  Judges described in great detail the cars Udaltsov drove around in with foreign political elites (generally, a black Audi A6), his meetings with “nationalists and anarchists,” and the sums he received – always in United States dollars – from this Georgian politician (ranging from $42 to $90,000).  Overkill is actually the only appropriate word in the entire English language for the insane level of detail.

On a micro level, reading clearly fabricated allegations for eleven hours, while making the whole room stand for the duration, hits in two places.  Subjecting Udaltsov and Razvozzhaev’s supporters to mind-numbing boredom and physical discomfort for basically an entire day, simply so that they can hear what they knew was coming anyway, is a great way to beat them down.  Meanwhile, the fact that only the most zealous supporters remained in the court as the crucial moment drew near must have taken its emotional toll on Udaltsov and Razvozzhaev, no matter how strong they appeared in court.  And, last but not least, let’s not forget that these two actually have to spend a couple years sitting in prison.

After a long day in court, Left Front activist Ilya Budraitskis put it best in a post on Facebook: the crazier and crazier targeted use of the legal system here is presented as a “price of everlasting Russian stability.”  But with the Kremlin returning its gaze inward, the stability Russians came to enjoy under early Putinism is being replaced by a tenuous stability for the man and his circle, with society’s return on investment going down faster and faster with every activist silenced.