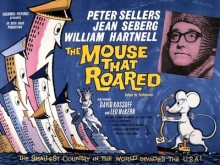 The Atlantic came out with a really cool piece that opened my eyes to the importance of geography in understanding Russia. Russia, it tells us, is a big country, and it fought many wars, and these two facts explain a lot, so much so that I need not explain any more. Suffice it to say that we can better appreciate Russian attitudes to Syria and Ukraine (forward defense and buffers) and long-term strategy (don’t get invaded). Now there are not many people who know that.  Actually I do tell my students these things and I thought I would take a moment to share my insights into comparative history and geopolitics.

Canada is a Big Country and Is Ruled by an Autocrat

How are we to understand two hundred years of Canadian (passive) aggression? Why does the northern neighbor bribe unsuspecting Americans with promises of medical coverage and the means to subsist? Well, it’s not Canada’s fault, it’s size that made Canada do it. They face the largest undefended border, they see the US out their bedroom windows, and were invaded by the US (or was it the other way around? Defense is offense so I get confused) right around the time Napoleon was invading Russia, so you see the connection. That’s why Canadian fighter jets are practicing forward defense in Syria as I write. This also explains why they are still ruled by a monarch, represented by a governor-general who suspends parliament at will and keeps the corrupt Harper in power. Well, now it’s Trudeau II (a dynasty!), but he can’t get around the size problem so he’ll do more aggressive things like deficit-spending in an effort to make the US and Europe look bad. He can’t help it: Canada is big but vulnerable.

Here’s a country that has been overrun in just about every major European war and quite a few minor ones. How would you react? Sandwiched between covetous powers, with no natural barriers to speak of, its culture and language threatened by its own success at the Eurovision song contest, and with nothing but an opaque banking system to defend itself, it resorted to a patient game of domination. It was in on the Benelux arrangements that gave us the Treaty of Rome and is a founding member of the Euro, and enjoys one of the highest standards of living in the world. Jean-Claude Juncker has taken over the EU and inflicts technocracy, boredom, and austerity on southern Europe. And it is ruled by a grand duke. How else can a country so small be kept together against such odds and such history?

In the 1950s this tiny duchy, “the mouse that roared,” was going bankrupt, its prized export item (wine) destroyed by American commercial capitalism. It decided that the best way to garner attention and resources was to confront the United States and lose. (See Germany and Japan, but think broadly…) At least the world would notice them. So the duchy declared war on the United States and invaded New York with crossbows. The duchy knew it could not win but desperately needed the attention of the world and the USA, and in the end acquired outsized power because it acquired a nuke. And it is ruled by a grand duchess.

Ok, I think we’re getting somewhere.