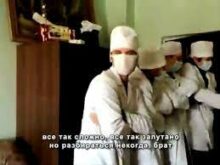 The limitations of nostalgia and, to a lesser extent, post-sots are tied to suppositions about affect:  nostalgia presupposes a set of emotional responses, however complex (hence Oushakine’s wonderful article title “We’re Nostalgic, But We’re Not Crazy”).  Focusing exclusively on the political uses of the past is also a bit narrow: even if the deployment of World War II tropes is useful to Putin, Putinism cannot explain everything.  Instead, if we take a distant, bird’s eye view of all of these phenomena (Putinist propaganda, nostalgia, post-sots, contemporary Russian literature’s preference for the past over the present as identified by Lipovetsky, Kirill Kobrin and Alexander Etkind), we see a contemporary Russia that, like Billy Pilgrim, is unstuck in time, hopping back and forth in the timeline of its past.

But what about the future?  The question is raised in the song I chose for the present study’s epigraph: Rabfak’s 2012 song “Our Nuthouse Is Voting for Putin” (Nash durdom golosuet za Putina):

Why Is today yesterday and not tomorrow?

On the most obvious political level, Alexander Elin’s lyrics are targeting a backwards-looking political system whose best attempts at articulating a vision of the future amount to primitive nostalgic revanchism. Not to mention the fact that the song came out during an election year, when voting Putin back into the presidency (after his interim stint as prime minister) made the equation between past and future more literal.  The past was Putin, the immediate future was Putin, and after Putin?  The media and the political class have proven unable to think beyond Vladimir Vladimirovich, and, in any case, it looks more than likely that he will remain in office for the rest of his life.  The protesters in 2011 called for a “Russian without Putin,” but his most zealous public surrogates would insist that Putin and Russia are one, and that a Russia without Putin is inconceivable.  Perhaps we can chalk this up to what Timothy Snyder calls the “politics of eternity,” the insistence that nothing will ever change, but it does run up against the obvious barrier of Putin’s own mortality.

Fictional attempts to depict Russia in the future have been hampered not by political censorship, but by the inability to conceive of the country in concrete, novel terms.  Much of the science fiction set in the far future has generic heroes and settings, but when the focus is on Russia in particular, the future ends up looking like the past.  Whether it be  the postapocalyptic feudalism of Tatyana Tolstaya’s Slynx  or the neo-medievalism of Iur’ev’s Third Empire and Sorokin’s Day of the Oprichnik, future Russia seems doomed to travel back and forth along its own personal timeline.  At best, the future is a dead end, a notion that is sometimes expressed in space as much as it is in time.  When the post-Soviet era was just beginning, Vladimir Makanin imagined a war-ravaged, near-future city where intellectuals survived by hiding in an underground bunker (Escape Hatch (Лаз’), 1991); just fourteen years later, Metro 2033, Dmitry Glukhovsky’s transmedia post-apocalyptic juggernaut, had all of Moscow’s human survivors living in the subway, with many of the stations strangely recapitulating nations and movements from the past:  the Hanseatic league, the Nazis, the Reds.

The architecture of Glukhovksy’s nightmare civilization is inadvertently instructive. By committing to the Moscow Metro as humanity’s last redoubt in Russia, he is beholden to the unique structure of the city’s underground transportation system.  The map of the Moscow Metro is a variety of zig-zagging, intersecting lines, as one would expect from a subway, but they are all united by the circle they intersect:  the ring line.  This combination of convoluted linearity with an endless circle could also map out the temporality of the postsocialist Russian imaginary.