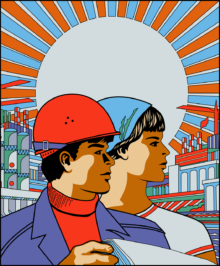 Yiannis Kokosalakis is a Research Fellow at Bielefeld University. His first monograph, Building Socialism: The Communist Party and the Making of the Soviet System, will be published in March by Cambridge University Press.

“Good riddance! We shall teach every kitchen-maid to govern the state!”

Dissident communists like Leon Trotsky and CLR James have often used variations of this stanza from Vladimir Mayakovsky’s epic poem Vladimir Ilyich Lenin in their polemics. Attributed to Lenin, the notion that “every cook can govern” is in such readings a succinct statement of his anti-bureaucratic political vision.

Lenin did indeed write something about the involvement of kitchen staff in affairs of state but, as is often the case with catchy quotes, the original text is slightly more nuanced. In an article penned less than two months before the October Revolution, the Bolshevik leader actually wrote that “we are not utopians,” aware that “not every kitchen-maid can engage in governing the state now.” What his party “demanded” is that “training in government affairs be led by the most conscious workers.” Though the implication remains that the ideal polity is one where everyone can participate in government, the temporal caveat (“now”) is significant. For as long as not every worker is ready to take part in the business of government, those who can (“the most conscious”) ought to take the lead.

This idea of revolutionary state-building as a long-term project requiring sustained leadership was Lenin’s most enduring contribution to socialist political theory. It was also the most consequential. In due course, it would assume the force of law in the clause on the Communist Party as the leading force in society, found in the constitutions of all socialist states claiming a Leninist lineage. Throughout the Cold War, an influential tradition of scholarship framed this idea as a crude attempt to provide legal grounding for single-party dictatorship.

More recent work on Soviet history has, however, sought to take the institutional development of the USSR more seriously. This new political historiography examines formal elements of the system, like the Constitution, alongside fuzzier political practices like patronage networks and social norms. Leninist political theory was an integral part of the interplay between the legal forms and the concrete, everyday operation of Soviet politics. It was the conceptual toolkit that determined the range of desirable goals motivating policy initiatives. It also provided the political vocabulary employed by the system’s actors at all levels.

The Communist Party was the chief producer and promoter of Leninist theory in the USSR. By virtue of its ubiquitous presence in the state apparatus, it was also the institutional linchpin of the system. The “leading role of the Communist Party” thus reflected a far more complex and interesting reality than the banal truth that the Party leadership controlled the Soviet government. With hundreds of thousands of ordinary people filling its ranks, the Party was a mass organization woven tightly into the fabric of Soviet society. A close look at its everyday operations offers fascinating insight into the nature of state-society relations in the USSR.

As Marxists, the Bolsheviks pursued a revolutionary project to construct a working-class state, a republic of laborers. It was only natural, then, that the Party’s presence was most visible in industrial settings such as shipyards, steelworks, and coal mines. Along with factory administrations and trade-union groups, Primary Party Organizations (PPO) were part of a complex institutional ecosystem regulating industrial life in the USSR. The “triangle [treugol’nik]” of Soviet enterprises has attracted the attention of social historians examining the nature of production relations forged by the Soviet industrialization process.

Many who shared the perspective of Trotsky and his comrades assumed that the triangle was a structure reinforcing managerial privilege, the PPO and trade unions ensuring the political and social subordination of the working class to the ruling bureaucratic elite of the Soviet state. Other labor historians drafted an alternative picture of factory politics, whereby workers took advantage of the institutional dysfunction of the Soviet state to pursue their own interests, thus carving out their own niche in the system.

In my article “Bolshevik bargaining in Soviet industry,” I revisited these debates through a micro-historical case study of communist party activism in Leningrad’s iconic Putilov—subsequently Kirov—machine-building plant. Drawing on the archival collections of the factory’s PPO, I argued that communist activism in industry politicized the production process by bringing Marxist-Leninist ideology to the shop floor. Within the context of the PPO, managers and administrative staff responsible for the timely implementation of production plans came into contact with (more numerous) workers and foremen who, though no doubt committed to meeting output targets, were equally concerned about matters like remuneration, workplace safety, labour intensification and so on.

When I started research on this piece, I was expecting to discover a fairly straightforward dynamic wherein managers would try to push workers to ever greater exertion and the latter would try extract concessions from their bosses. Though this dynamic was certainly present, I found that it operated rather indirectly, with implications that had not been entirely appreciated by earlier scholarship. Rather than an instance of simple, if displaced, industrial bargaining, what transpired in the Kirov PPO was a deeply political conflict over the substance of party policy.

In many ways, the PPO was the triangle, being the institutional space were workers and trade unionists engaged in a peculiar style of bargaining through a contest over the best way to implement party policy. Because of the extreme social pressures of Soviet industrialization, this process was hardly ever smooth, with party meetings often involving accusations of negligence, incompetence and, in the darker mid-1930s, accusations of political unreliability and sabotage.

Ideology was an essential dimension of this process of “Bolshevik bargaining.” Because all party policy was motivated by Marxism-Leninism and expressed in its terms, there was always some aspect of any directive that required more active involvement of workers in the management of production. Significantly, the party leadership insisted on the implementation of these policies, even as it became clear that the numerous production conferences, control commissions, and inventors’ clubs that Soviet workers were encouraged to join had a negative effect on labor discipline and multiplied the opportunities for disruptive clashes with management.

At every turn, the leadership sought to reinforce institutions of grassroots input into industrial administration, even as it promoted discipline in the workplace and warned radical communists not to disorganize production by trampling on the prerogatives of management. They simply saw no contradiction between the two objectives; or rather, as Leninists, they viewed this contradiction as an inescapable challenge in the grand project of socialist state-building. The PPO was therefore neither an instrument of managerial despotism, nor a dysfunctional bureaucracy that workers exploited to deflect pressures on their living standards. Instead, it was a complicated, contradictory institution that both extended the reach of state power over society, and limited the control of the state over the concrete implementation of policy.

Communist activism in industry prompts us to rethink the Soviet interwar years as a deeply revolutionary period, when the state remained committed to the transformation of the society it governed, while actively seeking to recruit large numbers. The Soviet Union of the interwar period was certainly not a state where  the cooks governed, but it was a state that made unprecedented efforts to involve laborers in everyday administration.