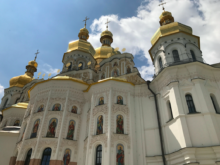 On October 11, the Ecumenical Patriarch of Constantinople, Bartholomew I – considered the spiritual leader of 300 million Orthodox Christians worldwide – set in motion a process to grant independence (or “autocephaly”) to a Ukrainian Orthodox Church seated in Kyiv. In so doing, he was attempting to free it from the control of the Russian Orthodox Church based in Moscow. Far more than a simple rearrangement of the religious furniture in the Orthodox house, the decision has sparked an intense political firestorm in Ukraine and Russia that threatens to open a new – and possibly violent – front in the ongoing conflict between the Ukrainian and Russian governments. Here’s why.

A brief primer on the Eastern Orthodox Church

Unlike the Roman Catholic Church, with which the Eastern Orthodox Church formally split in 1054, Eastern Orthodoxy does not have a centralized hierarchy that terminates at the top with a single authority figure like the Pope. Rather, it is composed of 14 autonomous (or “autocephalous”) churches whose authority and parishes generally coincide with the national borders of countries with large Orthodox populations. Each of these autonomous national churches is headed by a patriarch, but the Ecumenical Patriarch of Constantinople holds the status of “first among equals,” owing to Constantinople’s historical seat as the capital of the Byzantine Empire and the historical status of the Orthodox Church of Constantinople as the “mother church” of the other Orthodox churches. Though the prerogatives of the Ecumenical Patriarch over the other Orthodox churches and their believers are limited, the Church of Constantinople (as it is still styled) claims to be the sole authority to grant autocephaly to other Orthodox Churches. In fact, there are several historical instances of churches self-proclaiming autocephaly, only to find themselves excommunicated from the larger community of Orthodox churches.

Eastern Orthodoxy in Russia and Ukraine

In the tenth century, the city of Kyiv was the capital of a thriving state known as Kyivan Rus’. At its height, this state ruled a vast swath of territory in Eastern Europe. Moscow, for its part, would not even be founded until 1147. In 988, Grand Prince Vladimir adopted Eastern Orthodoxy for himself and his subjects as a political decision to win Byzantine Emperor Basil II sister’s hand in marriage, tying Kyivan Rus’ to the power of Constantinople. This political decision made Kyiv the focal point of Christianity in the Eastern Slavic world until Kyivan Rus’ fell to Mongol invaders in 1241. Eventually, the seat of the Kyivan church – headed by the Metropolitan of Kyiv and All Rus’ (one rank lower than a patriarch) would relocate to Moscow, while Constantinople would fall to the Ottomans in 1453, giving rise to the myth of Moscow as the “Third Rome” (following the “fall” of Rome and Constantinople).

Despite the claim that Moscow had superseded Constantinople in religious authority after the latter came under Ottoman rule, the Metropolitan in Moscow and his church remained subjected to the Patriarchate in Constantinople until 1589, when the head of the Russian church rose to the status of Patriarch of Moscow and All Rus’. For political reasons, this elevation was begrudgingly accepted by Constantinople, albeit begrudgingly. Similarly, Constantinople had little choice but to accept the Russian church’s assertion of religious authority over Ukrainian lands in 1686. Since then, Orthodox churches in Ukraine have answered to the Patriarch of the Russian Orthodox Church in Moscow.

It is this 1686 transfer of authority over Kyiv that today’s Ecumenical Patriarch of Constantinople has decided to annul. During the Soviet period, the Church was co-opted into the political service of the USSR, regaining autonomy only during the collapse of the Soviet Union. However, many commentators note that this separation of church and state in Russia was relatively short-lived. Indeed, today, the Russian Orthodox Church has very close ties to the Russian state.