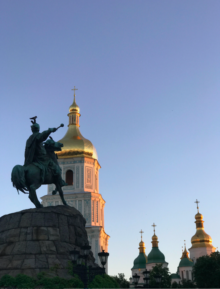 This is Part II of a two-part post. Part I may be found here. A version of this post originally appeared on The Monkey Cage.

The Orthodox Church in Ukraine Today

Ukrainian Orthodox parishes loyal to the Moscow Patriarchate number approximately 12,200, while those loyal to the recently recognized Kyiv Patriarchate number about 4,500 parishes. The UAOC is much smaller, with only about 1,200 parishes under its authority. However, a recent poll revealed that 28.7% of respondents claimed allegiance to the Kyiv Patriarchate, compared to only 12.8% aligning themselves with the Moscow Patriarchate and 0.3% with the UAOC. Almost 23.4% of respondents claimed to be “just orthodox” without pledging themselves to a specific branch, while another 37% declared that these issues were of no importance to them. While some UOC-MP parishes have switched loyalties since the outbreak of the war with Russia in 2014, and others have now signaled their intentions to realign themselves to the Kyiv Patriarchate, it remains to be seen how many make the switch and how conflicted the process will be.

Why is this a political issue in Ukraine?

An independent Ukrainian Orthodox Church free from Moscow’s control has long been a goal for many in Ukraine, especially among Ukrainian nationalist organizations. Demands for such a split from the Russian Orthodox Church have only intensified since Russia’s 2014 invasion of Crimea and its ongoing proxy war in the Donbas. Today, many Ukrainian politicians, journalists, and researchers accuse the Russian Orthodox Church of using its churches in Ukraine to support the Kremlin’s political-information warfare (often referred to as “hybrid war”) against Kyiv. There is also evidence that Russian clergy provided assistance to rebel forces in Ukraine’s East. Thus, the broader conflict between Russia and Ukraine has sharpened the religious divide, precipitating the recent decision in Constantinople.

In recent years, Ukrainian President Petro Poroshenko has championed the Ukrainian Church’s independence from Moscow, reflecting the continuing politicization of religion. To the degree that Poroshenko is able to claim credit for the Bartholomew decision, it may help boost the former’s flagging popularity ahead of the 2019 presidential elections. Currently, Poroshenko is polling in the single digits with bleak prospects for reelection. In the wake of the decision, Poroshenko declared, “This is an issue of national security. This is an issue of our statehood. This is an issue of global geopolitics. This is the collapse of Moscow’s centuries-old claims for global domination as the Third Rome.” Thus, Poroshenko may be playing a well-rehearsed game of identity politics to win the support of Ukraine’s voters.

Poroshenko’s political statements are in line with broader demographic shifts in Ukraine, which has seen modest declines in affiliation with the UOC-MP and modest increases in both non-religious persons and those identifying with the UOC-KP. Ukrainian sentiment towards Russia is negative and has only hardened in recent years. Conversely, Ukrainians across the country’s diverse regional and ethnolinguistic groups now express a strong desire to remain a unified, independent country.

How has Moscow reacted to the decision to grant independence to the Ukrainian Orthodox Church?

Not surprisingly, neither the Russian Orthodox Church (ROC) nor the Russian government have taken the news well. The day after the decision was released by Bartholomew I of Constantinople, the ROC announced that it was severing ties with Constantinople, a step known as “breaking the Eucharistic communion.” This means that ROC priests and worshippers are forbidden to worship in Orthodox churches or alongside believers who remain loyal to Constantinople, effectively separating 100 million ROC believers from the remaining 200 million Orthodox faithful worldwide. The Moscow Patriarchate’s parishes in Ukraine number about 12,000 out of a total 35,000 ROC parishes. It follows that Moscow stands to lose 35% of its total parishes if all Ukrainian churches were to switch their loyalties to the Kyiv Patriarchate. This potential loss explains the swift and uncompromising denunciation of the move by Russia’s Orthodox leaders.

Political leaders in Russia have also expressed outrage over the decision. Kremlin spokesman Dmitry Peskov issued a thinly-veiled warning that echoed Moscow’s justification for its occupation and annexation of Crimea in 2014: “Russia, of course, as it defends the interests of Russians and Russian-speakers, as Putin has always said, in the same way […] defends the interests of Orthodox Christians.” Seemingly implying that violent conflict over religion in Ukraine might be grounds for Russian intervention, Peskov warned, “This is if the Ukrainian authorities are unable to keep the situation within legal bounds, if it takes some ugly, violent turn.”

What are the political implications of the religious rift?

The Kremlin’s statement is troubling, given Russia’s well-established history of using trumped-up “rights violations” of Russian “compatriots” as a justification for intervention in sovereign countries like Georgia in 2008 and Ukraine in 2014. The potential for the conflict over religion in Ukraine to turn violent is nontrivial as Ukraine’s 12,000 UOC-MP parishes decide whether to remain loyal to Moscow or shift their allegiances to the Kyiv Patriarchate. The issue is more than symbolic: with loyalty goes control over valuable church property, which is owned by individual parishes. Indeed, some of Kyiv’s most iconic churches are aligned with the separate churches, including St. Sophia’s Cathedral and the Kyiv Pechersk Monastery (UOC-MP), St. Volodomyr’s Cathedral and St. Michael’s Monastery (UOC-KP), and St. Andrew’s Church (UAOC). Though Constantinople’s statement called on all sides to “avoid appropriation of Churches, Monasteries and other properties, as well as every other act of violence and retaliation, so that the peace and love of Christ may prevail,” experts warn that divided parishes could turn to violence to settle scores.

It is not far-fetched to imagine the Kremlin using religious tensions in Ukraine to further sow division, incite violence, spread misinformation, and stoke social conflict in Ukrainian society. Such efforts, though difficult to attribute back to Moscow, would be entirely consistent with the Russian playbook of information warfare that it has waged against Ukraine, the Baltic States, NATO allies, and the United States in recent years. In a 2015 Monkey Cage post, one of this post’s authors argued that Putin’s long-term objective in stoking conflict in Ukraine was the destabilization and eventual collapse of the Ukrainian government. That objective remains in play, though the project seems to have stalled as battle lines in the Donbas have hardened and much of non-occupied Ukraine has rallied against Moscow’s control.

A new source of domestic conflict over church loyalties and properties in Ukraine could be a golden-domed opportunity for the Kremlin to throw its adversaries in Kyiv off balance ahead of the 2019 parliamentary and presidential elections. Though such efforts might not be decisive in tipping the electoral scales, the experience of the 2016 U.S. presidential election reminds us that simply inciting citizens of targeted countries to hate one another and mistrust their leaders – religious and political alike – would be a political victory for Russia in its ongoing attack on democracy. In the long run, however, the ecumenical split might give Ukraine a further religious foundation to add to its political break to establish a fully independent national identity separate from that which has been spiritually tied to Russia for centuries. How Kyiv manages the transition will have profound ramifications that extend well beyond 2019.