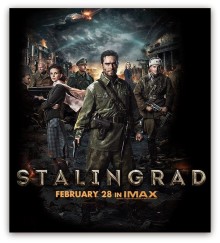 Recently those of us who care about Russia and Ukraine have had to think a lot about borders. Borders have complicated and ambiguous histories. Borders are hard. If you’d like a break from all that complexity—a break from thinking about contested regions and in-between spaces—go see Russian director Fedor Bondarchuk’s Stalingrad, just released in New York: as the ads inform us, “It’s an IMAX 3-D Experience.” And an IMAX 3-D Experience is unlikely to tax anyone’s capacity for ambiguity.

The city of Volgograd—called Stalingrad from 1925 to 1961—is not on any border: it’s in the Russian heartland. War stories that take place in any country’s heartland do not generally deal in ambiguities; rather, they’re about repulsing evil invaders and reclaiming one’s home. Stalingrad is no exception. In case you’ve forgotten, it will remind you that Nazis are bad. Also, Russian girls are pure and patriotic, Russian high culture is a universally beloved national treasure (as evidenced by portraits of Pushkin on the walls of bombed-out buildings and the singing of arias by common soldiers), and cowards die cowardly deaths. This is the kind of film that slows down when Something Very Important happens, to make sure that you get it.

Stalingrad is therefore a movie that meets a certain need—the need to be able to cheer wholeheartedly when an evil enemy gets blown up. Cheering when Nazis die at Stalingrad is like cheering when orcs die at Helms Deep. True, at a few points it seems that Bondarchuk might be aiming for a bit of ambiguity. When one German officer burns some Jews alive, his fellow German officer feels kind of bad. When one ordinary German soldier is shown to be very young, almost a child really, we feel sad about that. But this ambiguity turns out to be thoroughly fake: the sort-of-sorry-about-burning-Jews German officer repeatedly rapes a Russian woman and causes her death. The ordinary German soldiers behave like animals to the Russian civilians whose burnt-out city they occupy. So don’t worry, you can cheer without reservations when the orcs are routed (I certainly did), giving yourself over to the rousing battle scenes that are by far the best part of the film.

The German invasion of the Soviet Union has its obvious parallel in the French invasion of the Russian Empire in 1812—the subject of Tolstoy’s War and Peace. During the Second World War, Tolstoy’s book was printed and reprinted in huge editions, read aloud on the radio, and adapted as a libretto for Prokofiev’s famous opera: it provided a template for how to behave in the Great Fatherland War, when the homeland was beset by invaders. But War and Peace is not really about one war that Russia fought against Napoleonic France, it’s about two: one in the Austrian borderlands in 1805, and another in the Russian heartland—Moscow!—in 1812.

In the first war, Russia was part of a complicated and ever-shifting alliance of European powers, having been drawn into the fight by its role in a delicate network of geopolitics. This war was fought on land that meant nothing to Russia’s peasant troops, a war that was orchestrated—in Tolstoy’s representation at least—by a multi-national and multi-lingual group of elite European generals. The common soldiers were never quite sure why they were fighting in the first place, and Russia more or less lost. That’s why Paris has the Gare d’Austerlitz, a train station named after Napoleon’s big win, the one we read about at the beginning of War and Peace.

But as Wikipedia tells us, Austerlitz is now “Slavkov u Brna”—a little town “about 10 kilometers south-east of Brno in Moravia, at that time in the Austrian Empire (present day Czech Republic).” In other words, a border region: complicated. Anything can happen. And in this sense, not so different from places like Ukraine and Belarus during World War II, where allegiances were often far murkier than can be comfortably acknowledged today.

But 1812 was as simple as Stalingrad: Napoleon’s troops invaded Russia, made it all the way to Moscow, burned the city down, retreated ineptly, and were exterminated by Russian soldiers and civilians who pursued them as they tried to make their way home in the snow. In this part of War and Peace, even Tolstoy, humanist and moralist, invites us to take a certain pleasure in the extermination of the French army—because Tolstoy knew that war in the heartland means something entirely different than does war in some far-off, complicated border region.

At one point near the end of War and Peace, Russian Field Marshal Mikhail Kutuzov, wise old man and defender of the motherland, seems to ask his own troops to show mercy to the retreating French army: “‘You see what they [the French] have come to,’ he said, pointing to the prisoners. ‘Worse off than our poorest beggars … now we can even pity them. They’re human beings too. Isn’t that right, lads?’” But the moment is short-lived: just seconds later, Kutuzov raises his head and cries to his men, “But after all who asked them here? Serves them right, the bloody bastards!”

That’s the pleasure to be had in movies like Stalingrad:  serves them right, the bloody bastards. It’s a story about a place in the middle of Russia—and thus not a story that has much to do with the complicated places that have been preoccupying us in recent days.