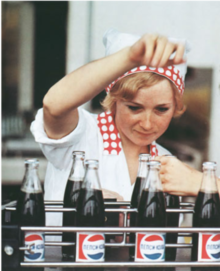 Rebekah Hodge is an M.A. student in the Food Studies Program at NYU Steinhardt, where she studies the use of food as a weapon of war, focusing primarily on the twentieth century.

Pepsi, less iconic than the world-famous Coca-Cola, forged new paths in the Soviet Union during the Cold War. Prevented from entering the USSR, Coke was banished from the East and became the longed-for soft drink for teenagers and young adults across Eastern and Central Europe. Although Coke was not available, Pepsi gave Soviets the fizzy and sugary flavor of the West so many were craving.

Leading the Pepsi charge was businessman and future PepsiCo CEO Donald M. Kendall, who, at the 1959 American National Exhibition, handed a cup of Pepsi to Nikita Khrushchev — who eagerly slurped it up and asked for more. Bearing Khrushchev’s unofficial seal of approval, Pepsi made its way into the USSR.

The fizzy beverage became the first — and remained the only — American product to be sold in the USSR. What made the situation complicated was the fact that PepsiCo could not receive any financial payment from the USSR or a USSR-based company. Rather than agreeing to have its product shipped into the Soviet Union without payment, PepsiCo struck a deal with the Russians. In exchange for providing all the necessary materials and equipment for the production and sale of Pepsi on Soviet territory, PepsiCo would retain sole rights to sell Stolichayna Vodka in the US. Not only did Pepsi bring American soda to the USSR, then, but also brought Russian vodka into the US. Cans and bottles of Pepsi were made, distributed and sold across the USSR from the 1960s until the collapse of the Soviet Union in 1991 featuring the same recipe as was used in the US, albeit under Russian labels.

New forms of distribution were also explored in the USSR that were not used in the US. One such method was a type of communal machine. Placed outside, a large machine would pour a glass of Pepsi into a reusable glass cup when a customer inserted their coins into the machine. Excited for their Pepsi, consumers would then drink their soda from the glass and then return the glass to the machine for the next customer to use.

Though this means of distribution did not reach the US, the communal nature of drinking Pepsi helped promote its sales, while also taking advantage of the strong emphasis on communality within official Soviet ideology.

As the New York Times reported in 1976, Russia-based Pepsi plants were on track to produce 216 million bottles of Pepsi per year as of 1978. While not everyone in the USSR was able to, or wanted to, drink it, the penetration of the market and the popularity among Russians at the time suggests that Soviets were far more open to Western goods than their leaders may have supposed — or wanted to exploit.