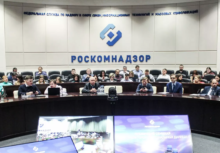 Laura A. Henry is a Professor of Government and Legal Studies at Bowdoin College and author of Red to Green: Environmental Activism in Post-Soviet Russia(Cornell University Press, 2010) and co-author (with Lisa McIntosh Sundstrom) of Bringing Global Governance Home (Oxford University Press, 2021).

Laura Howells is a 2021-2022 Fulbright Research Grantee to Estonia and an incoming Ph.D. student in the Department of Politics at Princeton University.

In recent weeks, the Russian government has made a concerted effort to control the flow of online information about the country’s war in Ukraine. The Russian government’s rapid and sweeping actions to close great swaths of the Internet to citizens have re-ignited comparisons between digital authoritarianism in Russia and China. The government’s actions also raise quandaries for influential foreign media companies. Even those not blocked by Russian regulators are voluntarily leaving the Russian market. Their decisions to self-sanction have significant repercussions for the flow of outside information into the country.

There are important differences between China’s “Great Firewall” and Russia’s efforts to control the Internet, even today. As our research demonstrates, Russia’s Internet governance is largely reactive—a belatedly introduced control system grafted onto a once largely free digital sphere.  Due to this history, the Russian government’s censorship efforts interact with international sanctions and multinational companies’ decisions to exit the Russian market in complicated and potentially unintended ways.

Russia has tightened its digital information space significantly following its invasion of Ukraine. In early March, the government introduced a new law that carries a prison sentence of up to 15 years for individuals who “knowingly” spread “false information” about all Russian state bodies operating abroad. A Russian court has banned Facebook and Instagram after Meta’s controversial policy changes temporarily allowed calls for violence against Russians. The federal communications regulator Roskomnadzor has restricted access to Twitter. Two of the most popular search engines in Russia, Yandex and Rambler, have upheld Russian government demands to filter and demote search results about the war in Ukraine. These changes leave Russian Internet users with fewer options to access services and less alternative information than ever before.

However, comparing Russia’s Internet control system to the infamous Chinese Firewall remains overblown, even as we see movement in Russia towards the creation of a sovereign Internet. One key difference is that Chinese Internet governance co-evolved with the creation of the Internet in China. From the earliest days of online communication, China developed home-grown technology and social media giants to rival those in Silicon Valley. As Christina Lu notes, Chinese authorities have long overseen the construction of “a vast, dynamic social media ecosystem” as part of its regime to control information. Chinese Internet users can choose from nine domestic dating apps, use the domestic equivalent of TikTok (called Douyin), search the web with Baidu, and use Weibo instead of Twitter.

In contrast, Russia began governing the Internet and related stakeholders—including ISPs, private companies, and users—much later, in response to perceived challenges to the regime, such as the Bolotnaia Square protests in 2011. In the wake of the protests, the government introduced a range of new policies to manage the domestic information space, on- and offline. These included the foreign agent law in 2012, the creation of an Internet blacklist registry the same year, and a 2014 amendment which reduced the level of foreign ownership in print, online, television, or radio media from 50 to 20 percent.

Despite these measures, before the invasion of Ukraine international platforms remained widely accessible, with a few exceptions. This is rapidly changing. While domestic Russian social media platforms like VK and Odnoklassniki, owned by a company closely tied to the Russian state, have been popular options, platforms such as YouTube, Facebook, WhatsApp, and Instagram remained a significant part of the Russian media market. Following recent bans, the Russian government appears to be facilitating alternative domestic social media sites to fill the void. Just two weeks after Roskomnadzor announced plans to block Instagram, a similar app called Rosgram was introduced to Russian users.

Although effective for blocking the flow of information, reactive governance is riskier for the regime. Russian citizens have enjoyed decades of relative Internet freedom. Prior to the war, Russian citizens expressed strong opposition to censorship in one 2015 survey in which 79% of Russians said it is at least somewhat important “that people can use the Internet without state/government censorship in our country.” While survey data in authoritarian contexts is often opaque, these findings point toward challenges for retroactive Internet governance that depends on average users’ tacit acceptance of Internet censorship policies. Some Russian Internet users are responding to the obstacles of accessing digital content by using VPNs. According to an April 2022 Levada Center poll, a quarter of all survey respondents currently use VPN services, including about half of all 18-24 year-olds in the sample.

The Russian government’s attempt to stem the free flow of information online interacts with international sanctions and corporate self-sanctioning in troubling ways. Technology and digital service providers like Apple, Netflix, Spotify, and Microsoft have suspended activity and sales in Russia in response to the invasion of Ukraine and subsequent repression in Russia. In early March, TikTok announced that it would “suspend livestreaming and new content to [its] video service […] in light of Russia’s new ‘fake news’ law.”

The unprecedented sanctions and the exodus of many international technology companies from Russia is understandable, but their absence risks ceding the information space to the Kremlin. Cutting off Russian users from international platforms makes it easier for the Kremlin to isolate the Russian public from all but its carefully-crafted narratives. For example, Russia citizens who try to circumvent the censorship regime by using VPNs may be frustrated by their inability to pay for the service as prominent financial firms like Visa, Mastercard, PayPal, and American Express have voluntarily blocked Russian banks from their networks. In an unusual move to address this problem, ProtonVPN has waived fees for Russian users in order to allow them to continue to access social media and other sites.

The isolation of Russian users also extends to web connectivity. An Internet connectivity non-profit has warned that sanctions have already had serious repercussions for existing Internet infrastructure. In order to comply with global sanctions, Internet infrastructure companies and Internet Exchange Points disconnected some Russian networks from the Internet. Similarly, in light of the Ukrainian government’s calls for permanently disconnecting Russia from the global network, the non-profit cautions that to comply with such demands would mean “fragmenting the open Internet, [and] cutting users’ access both within and outside Russia.”

Western leaders have implied that imposing harsh sanctions on the Russian economy could bring about regime change from below. Most experts see this as unlikely—and in the absence of impartial information about the war available to Russian citizens, it seems even less likely. When it comes to the digital sphere, supporters of Ukraine should instead be seeking smart sanctions that prioritize average Russians’ ability to access alternative media and services rather than inadvertently making digital authoritarianism even more possible for the Russian government.