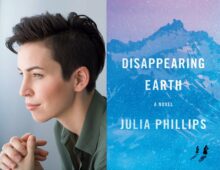 Abby Latour is a journalist and MA student in Russian Studies at NYU.

Julia Phillips is the debut author of the nationally bestselling novel Disappearing Earth.

Author Julia Phillips says three significant political moments framed her time in Russia. Her sojourn there led to Disappearing Earth, a novel set in the Far East that centers on a community’s response to the kidnapping of two girls.

The first of these moments came in 2008, when Russia had just invaded Georgia. The second was in 2011, when Phillips traveled to Kamchatka as a Fulbright fellow, intending to write a novel. At that time, Putin was preparing to resume the presidency. Occupy Wall Street protests had overtaken lower Manhattan, while anti-corruption protests swept Russia.

The third moment occurred in 2015, when Phillips returned to Kamchatka to gather colorful details about contemporary life in the remote peninsula. By that time, Russia’s economy was recovering from crisis. The government had cracked down on protests. U.S.-Russian relations had soured. The change, Phillips says, was palpable: at one Kamchatka bathhouse, visitors wiped their feet on an American flag as they crossed the sauna’s threshold. “I was grateful I had done the work of relationship-building at an earlier moment,” Phillips said.

Her efforts paid off. Since its May 2019 debut through Knopf, Disappearing Earth was selected as one of The New York Times Book Review’s ten best books of the year. The novel will be published in twenty-three languages.

Disappearing Earth begins with the kidnapping of the Golosovsky sisters — Alyona, 11, and Sophia, eight — after the girls accept a ride home from a stranger instead of taking the bus. Each chapter tells the story of someone adjacent to the crime: Olya and Diana, classmates whose after-school freedoms are curtailed after the sisters disappear; Valentina Nikolaevna, a woman critical of the kidnapped girls’ single mother, who “allowed” her daughters to disappear while she worked; Oksana, a volcanologist who may have seen the suspect’s car. There’s also the story of Ksyusha, a reindeer herder’s daughter and university student who joins a dance troupe to maintain her ties with her traditional life in her hometown. These changing perspectives afford readers glimpses into a region in transition in the post-Soviet era.

Kamchatka is the size of California and rich in natural resources. During Soviet years, the peninsula was closed to foreigners due to its military importance. That situation has now changed: developers, migrant workers and adventure tourists have descended on the once-isolated territory, prompting soul-searching and nostalgia by witnesses to its transformation.

Phillips set out to create a work of fiction for American readers set in what, for them, is exotic landscape. She devoted her time in Kamchatka to meeting people, traveling, taking notes and photos, recording conversations and keeping a diary—not writing the novel. Experiencing the region was not conducive to the work of fiction writing, she said—work like structuring plot and engineering characters arcs—labor Phillips describes as “quiet” and “percolating.”

“I find writing to be a challenging, productive, and rewarding experience. Sometimes it’s joyful and fun. But not often,” she said.

Prior to the novel’s publication, the fruit of her time spent in Kamchatka was a stack of well-worn notebooks filled with diary entries, impressions and keepsakes. Phillips saved receipts from restaurants, jotted down playlists, and transcribed conversations. She did not reread many of her journals.

“Fiction-writing, to me, is experiencing a moment, a conversation, or reading something in the newspaper—then imagining a whole backstory behind it. You respond to a situation you’ve witnessed. But where it goes is a different imagined reality.”

The act of recording her memories informed her writing process. Phillips spent the three years prior to her 2015 trip saving meticulously to return, despite having no literary agent or contract. This was a gamble, replete with low moments. “I asked myself often what cost was too high. Not only financially, but also personally. No one was expecting this work. No one had asked for it. There were many moments of questioning ‘why?’”

Now that she is back at home in Brooklyn, Phillips relies on Twitter to keep up with news about Kamchatka, though news acquired through social media may be biased, warped or incomplete. There are few alternatives for tracking protest movements and anti-Putin demonstrations—subjects that interest her—other than following local residents and activists’ posts on social media. This is a reality she finds troubling, but she has yet to find more reliable sources.

Phillips also finds herself turning to Twitter for inspiration about writing: there, even the most successful writers vent about their bad days, she says.

Despite her recent success, Phillips said she still needs encouraging words. Prior to Disappearing Earth, she worked on another manuscript for seven years. That one went nowhere. Her approach with this novel was different: “Knowing there may be no audience for the stories I wanted to tell was clear. It was also liberating. I gave myself the luxury to explore that interest. That was its own reward.”

Disappearing Earth joins a wave of recent representations of Russia and former Soviet states in American popular culture. Film and TV makers have reimagined classics such as Anna Karenina (2012, starring Keira Knightley) and War and Peace, which aired on A&E in 2016. A Gentleman in Moscow, by Amor Towles, has sold over 1.5 million copies since publication by Viking in 2016. The sixth and final season of the Cold War-themed spy thriller, The Americans, aired in 2018. An HBO miniseries in 2019 introduced many Americans to the details of the 1986 Chernobyl disaster.

Phillips is currently not planning new work set in Russia. But she believes the country and culture will likely be a permanent fixture in Americans’ imaginations, although perceptions of Russia may vacillate: “Russia as geo-political foe has re-emerged recently. But Russia as object of fascination has remained consistent.”