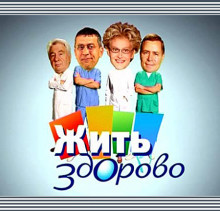 Have you ever wondered why Babushkas fear the draft more than any pathogen? Do think there ought to be a government run campaign to convince people that drinking cold water in summer does not cause strep throat, or that sitting on the cold ground will night nitro-freeze a young woman’s ovaries?

How can one eat whole foods, get well, consume vitamins?

Who will tell these people about their forbidden organs?

Who can reassure them that everything is working at a normal pace down where the sun don’t shine and the drafts don’t blow?

Well it’s Elena Malisheva to the rescue. Elena is one of those people with a haircut that looks like she is always very surprised. But don’t be fooled: she’s totally in control, armed with a sidekick, her scrub-clad doctor-professor-immunologist Andrei Prodeus.

Simply tune in to her Pervii Kanal talk show “Live Healthy!” to find these answers and more.

Words like “good” and “bad” pop like “wacks” and “whams” from the 1960’s Batman series. Volunteers are asked to come up from the audience in order to demonstrate various medical problems in unexpected experiments. For example, a volunteer may come up and be asked to snap in half a plastic tube, followed by triumphant applause by an Oprah-fan-like audience, in order to demonstrate the perils of a hardened artery in ways any-old-person can comprehend.

Most examples are life-size and hands-on. It is sick to watch the unsuspecting volunteer stand up in front of the Rabbi (who is obviously uncomfortable to be on TV himself) and be asked to scrunch up her turtle neck and pull it up all the way over her head. You get two guesses to figure out what medical conditions the great Malisheva was demonstrating with the head Rabbi and and an over-the-head turtleneck. It took just one? Well, good guess-work, gumshoe. Yes, it’s circumcision. Let’s go to the videotape (I can’t look…):

Watch out for that infection!

“Live Healthy!” is often unsettling bizarre to witness, not to mention a reasonable unmask-er of the absurdity of Doctor Oz himself. Her slogans for each show are catchy. One episode is called “The Art of Pooping”. To her credit, her musings are based on medicine and science, and her motto for those worried viewers about most problems is not to agitate nerves but to tell them, “It’s Normal!”

She once got in trouble for accusing Michael Jackson of being a drug addict. But then, she kind of looks like him.

For those who can’t quite give up a slightly more old-timey view of medicine, there is Gennady Malakhov.

He even comes with his own Bizzarro “The View” to demonstrate a complicated but necessary medical procedure: an enema.

Malakhov has come under criticism for his recipes that not only don’t follow real alternative medicine procedures but can in fact be harmful to a person’s body. There’s a whole generation of people who sit at home during the morning hours watching his show “Malakhov+” learning the wrong way to clean their kidneys. Pensioners being misinformed by daytime television. Imagine that!

All in all, daytime medical talk shows don’t go too far out of  their way to worry viewers, but to help them. An intelligent viewer will take everything with a grain of salt and think twice before following any instructions given by the tube. Oh, except for the art of pooping. You should follow the advice about pooping verbatim. If things feel just a little off, there’s no need to worry. It’s normal!