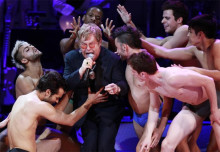 Last month, despite being a homosexual, music legend Sir Elton John performed to a sold-out crowd in Kazan’s Taftneft Hockey Arena. He played for three hours without intermission and with an unexpected 40 minute encore of Lion King classics. The previous night’s Moscow crowd had not been treated to such a grand closing number.

There had been calls to block the concert from various groups. An Imam in Kazan had prayed to prevent Elton John from performing because of his homosexuality. This is about as peaceful and spiritual as protests get.

The success of Sir Elton’s concerts proves something about the gay propaganda laws that many will not acknowledge: there won’t be mass arrests of open homosexuals at the 2014 Winter Olympics. The concert proceeded as normal. Ticketless fans vainly attempted to force their way in, con-men sold fake photographers at the door for five hundred rubles. Like at any “western” concert.

Before the Russian tour, Sir Elton said at a press conference that he would make a statement during his concerts about gay rights. At the concert in Moscow, the singer said that the anti-gay-propaganda law was inhumane.

In Kazan he said, nothing about LGBT rights. This absence was not recognized by Western media, which said that he “slammed” Russian anti-gay laws.

I wonder what caused the performer to change his mind. Maybe media coverage in Moscow was better suited to making him look good in Western lights; maybe he did not want to hurt the Imam’s feelings. It is possible that Sir John simply wanted to play music and had said what he had wanted to say already.

The law against gay propaganda is a complicated topic, but in my opinion, it is not sending anyone to the Gulag. In separate speeches Putin has promised to welcome and keep safe homosexual athletes, spectators and personnel at the Sochi Olympics. This week he said on television that they Russian government doesn’t want to arrest anyone.

The law is a blanket law meant to be enforced selectively. We saw this approach to law with recent hooliganism charges brought against various activists doing things like nailing their genitals to Red Square. Hooliganism is an excuse to bring someone in and book them because the law related to their crime doesn’t exist.

But still, if gay propaganda were such a thing, wouldn’t Elton John be it? Haven’t they heard the 1973 classic Bennie and the Jets? Not really the lyrics, but the falsetto in live recordings? Sir John is on the board of AIDS groups, he is outspoken about gay rights all around the world. He makes art, music, and during performances tries to affect the opinion of his audience. Isn’t that the definition of propaganda?

It’s hard to explain the relationship between the population and the laws in Russia, but it is not the same as the one in the US. Elton John’s performance is proof that there will not be crazy mass arrests or beatings of homosexuals at the Olympics in February. Sir Elton John is gay propaganda, and he left Russia scot free.

The popularity of this music supersedes the amount of homophobia in Russia. People going to these concerts knew about Sir Elton’s sexual orientation, and, apparently, coats were lying on the floor because there wasn’t enough room for everyone’s jackets in the cloak room. At a Russian Hockey Arena. Russian citizens are willing to withstand a disagreement about homosexuality. The climate isn’t optimal to be a gay person, but it’s not so uncontrollably hostile that Sir Elton was dragged and beaten form stage. Is this what Sochi protesters imagine?

But still, why didn’t Elton John say anything at the concert in Kazan when he had promised to? Some say he didn’t want to rock the boat in Kazan, the capital of a largely Muslim republic (Though plenty of non-traditional groups, LMFAO with their song “Shots” for example, have performed in Kazan.)

Possibilities of upsetting fans aside, political and moral aspirations aren’t obliged to be connected to pop concerts.

Should Elton John be expected to declare he’s here and queer at a music concert? Is that a standard we hold all musicians to on all tours to all countries? After all, there may not be a more condescending thing on the planet than Bono stopping a concert to start a slow clap and then saying, “Every time I clap my hands a child in Africa dies.”

[An anecdote: at a concert in Scotland, when Bono was clapping his hands and saying, “Every time I clap my hands a child in Africa dies,” a fan shouted out, “Then for God’s sake stop clapping.”]

On the other hand, I think that Sir Elton would have had the right to say something for the sake of an open dialect. He came to a territory whose spiritual leader had been praying to God that he stayed away. It wouldn’t be completely inappropriate to drop a couple of words to tell his side of the story.

Maybe Elton John had never planned to say anything about gay rights in Kazan, and maybe there was no political motivation behind it. It’s hard to see a flaw in that. I’m afraid, though, he might have been intimidated, having retracted a promise to speak up. If so, then the anti-propaganda law is  effective: not through enforcement but intimidation. At the Olympics, combating intangible intimidation will come down to individuals.