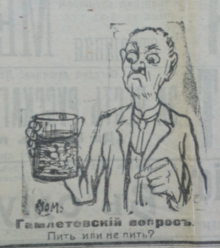 Felix Cowan is a doctoral candidate in History at the University of Illinois at Urbana-Champaign.

In the years before the First World War and the Bolshevik Revolution, Russia was home to a thriving penny press. Journalists, publishers, and ambitious entrepreneurs in towns and cities across Russia created small newspapers written in simple, straightforward, and sensational language and sold them for the cheapest price possible, a single kopeck. These kopeck papers became Imperial Russia’s most widely-circulated news media genre in large part because their low price and accessibility appealed to a growing population of poor and less-literate people in a rapidly urbanizing Russia.

Kopeck papers were accessible because the text of their articles was simple and direct, but also because they communicated messages in multiple ways. Design features like bold headlines or eye-catching fonts caught the reader’s eye and attracted them to important pieces of content. Even better, illustrations and editorial cartoons highlighted important articles, communicated the same messages visually, and imbued editorial narratives with emotional weight.

“Reading” an image does not require a high degree of literacy, which made illustrations and cartoons with minimal text an ideal way to communicate to less-literate readers. As a result, when editors wanted to highlight a particular narrative, they often did so by using visuals to supplement written articles. The following image demonstrates this quite effectively:

The high cost of living, the predatory behavior of merchants and landlords, and the inaction of municipal governments on these issues were common subjects for penny newspaper columns and editorials.

The above cartoon from the Saratov newspaper Saratovskaia pochta (The Saratov Post) communicates the same problems visually. The city administration sleeps while the obyvatel’, or everyman, here drawn as a hare, tries to wake it but is held back by predatory animals dressed as Saratov’s landlords, butchers, bakers, and firewood merchants. Images like these ensured that all readers, regardless of their level of literacy, could easily understand the newspaper’s preferred narrative that the city administration needed to intervene to save ordinary people from predatory merchants and landlords.

Beyond accessibility, illustrations and cartoons had a second important function. Images can convey strong emotions; to use one recent example, the photograph of Alan Kurdi’s body on a Turkish beach conveyed the realities of the Syrian refugee crisis more than countless written articles. Penny newspapers rarely printed photographs due to technical and financial limitations, but they were clearly aware of the power of images and used illustrations and cartoons to give emotional weight to editorial narratives, as the following two images demonstrate.

The first, also from Saratovskaia pochta, addressed another frequent problem in Russia’s early twentieth-century urban life: public health concerns arising from deficient public services, in this case Saratov’s low-quality drinking water. Under the title “Contamination of the water supply,” a man holds a glass of infested water and contemplates the “Hamlet-esque question: to drink or not to drink?” The cartoon then shows what happens “After drinking the water” as a queue of ill men struggle into a hospital. The most striking part of this image is the look of disgust on the man’s face as he contemplates drinking the infested water. Where countless columns and articles explored such problems of urban affairs, illustrations communicated the emotional reality of such an unwelcome choice for residents of Saratov alongside the personal and public health consequences of the city’s failure to supply clean water. Less-literate readers who may not have absorbed the Shakespearean joke in the caption could still contemplate the stakes of this problem through the newspaper’s emotional imagery.

The second illustration, which appeared in the Moscow penny newspaper Trudovaia kopeika (Working Kopeck), addressed the problem of unemployment, also a regular topic for the penny press. But all the articles about unemployment conveyed less about the emotional weight of joblessness than this single cartoon. The unemployed worker occupies an entire park bench. He is alone in the frame and the world seems to fade into obscurity behind him, but everything nearby is wilted and dying. Even his limbs droop alongside the flowers and the desolate environment, and his face is turned down to avoid the viewer’s eye. The artist powerfully captures the man’s dejection: enormous hands and calloused feet are useless without work. The image invites readers to share in his depression.

Like the other illustrations discussed in this post, Trudovaia kopeika’s cartoon about unemployment was both emotionally resonant and easily accessible. It featured only a single word, bezrabotnyi (unemployed) to link emotional imagery with editorial subject. Less text-heavy than my earlier two examples, it was even more emotionally laden, pushing the reader to absorb the subjective experience of an unemployed worker whose misfortune depressed the entire world.

Readers might have seen themselves in the desperate obyvatel’-animal, the disgusted water-drinker, or the dejected unemployed worker. Journalists certainly imagined that their readers were primarily drawn from groups like workers, the unemployed, users of subpar city services, and victims of predatory merchants. Even if they hailed from a different part of the population, such images likely helped readers empathize with victims of urban life and, by highlighting their private troubles, bolstered journalists’ repeated calls for reform and improvement.

Illustrations and editorial cartoons helped Russia’s penny press reach a massive audience of less-literate readers while also giving emotional weight to the stories journalists wanted to tell and the arguments editors wanted to make. Like the modern media, they sought visuals that were not only relevant but moving, and that would ideally move readers towards certain emotional responses.

As we continue to grapple with the constant question of how differing forms of media coverage affect reader responses, it is worth remembering that this is not a new problem. A century ago, Russian journalists could not tweet images to their followers or record affecting videos for television news, but they used what tools they had to make their arguments as accessible and emotional as possible, extending the public sphere to new groups of readers while also imbuing public discussions with heightened emotional stakes.