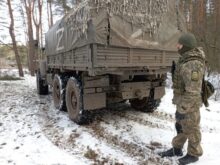 Above: A Ukrainian-captured Russian vehicle with the letter ‘Z’ painted on its sides. Source

Alexander McConnell is a Ph.D. candidate in History at the University of Michigan, specializing in Russian/Soviet cultural and intellectual history.

For devoted readers of Victor Pelevin, contemporary Russia’s most famous and famously reclusive writer, the sight of armored vehicles emblazoned with a mysterious “Z” might have brought to mind the “Homo Zapiens” of his dystopian novel Generation P (1999). Yet it is another of Pelevin’s works, the modern-day vampire story Empire V (2006), that has become unexpectedly embroiled in the fallout from Russia’s invasion of Ukraine. A long-anticipated and costly cinematic adaptation of the novel by Russian-American director Viktor Ginzburg, originally slated for release on March 31, 2022, now faces an uncertain fate. Whether as a box office success or failure, Empire V will likely serve as the first major test case of the new economic and political realities confronting Russian cultural producers in an era of war and sanctions.

Ginzburg reportedly began working on adapting Empire V soon after bringing Pelevin’s Generation P to the screen in 2011. Almost from the outset, the production was beset by delays and budgetary issues. Producer Ivan Zassoursky’s initial projection of a 2017 theatrical release proved wildly optimistic, with filming commencing only in September of that year. A new release date of November 2018 lasted until April 2018, when the premiere was pushed back until early 2019.

At that point, with seventy percent of shooting complete and a budget shortfall of 235 million rubles, the filmmakers turned to a novel form of fundraising: cryptocurrency. An Initial Coin Offering (ICO) of “Bablos” tokens—named for the money-like substance that the vampires of Empire V consume instead of blood—offered fans the chance to partake in a “first of its kind” cinematic crowdfunding project. Ginzburg even jokingly referred to his film as “practically an advertising reel for cryptocurrency” in a press conference to promote the ICO.

According to a 2018 white paper provided on the Empire V website, Bablos investors are eligible to exchange the digital tokens for other crypto and fiat currencies, or for access to an “exclusive crypto-premiere” of the film. Those who choose instead to save their tokens will be entitled to dividend payments based on the film’s eventual commercial performance. The document envisions a worldwide revenue of up to one billion rubles in what it calls the “optimal scenario.”

The crowdfunding gimmick generated immediate interest, if also some skepticism. A 2018 article in the Russian business daily Kommersant, for instance, cited crypto “expert” Nikolai Evdokimov, who praised Ginzburg and his team’s marketing prowess but noted that the Bablos white paper “lacks data about partners who would ensure the functioning of its blockchain system.” (In 2019, Evdokimov was himself sued by the U.S. Securities and Exchange Commission for $14 million worth of “unregistered offering and unregistered broker activity.”)

Despite the crypto-fueled cash injection, which enabled principal photography to wrap in 2019, the film evidently languished in post-production. The first trailer for Empire V finally appeared to great fanfare in September 2021, advertising an imminent theatrical debut on November 25. Only weeks before its scheduled premiere, however, the film was postponed again until March 31.

This setback came on the heels of a financial dispute with Fond Kino, the Russian state’s main funding body for cinema. Citing persistent delays, Fond Kino representatives went to court in October 2021 to demand repayment of 84 million rubles in subsidies, plus late fees from the film’s producers. In a November 2021 interview, Ginzburg called the court case “a very strange and not entirely ethical decision” in light of difficulties created by the COVID-19 pandemic. Nevertheless, he maintained that “there is no war between us and Fond Kino.”

The director could not have known how foreboding his choice of words would appear in hindsight. Vladimir Putin’s decision to pursue a war of aggression against Ukraine in late February has threatened not only that country’s sovereignty and the broader European security order, but also the economic viability of Russia’s globally interconnected creative industries. Prestige projects like Empire V might seem better positioned than most to weather the storm, but prominence also represents a potential vulnerability in turbulent times.

The film’s two most marketable stars, Miron Fyodorov (better known as the rapper Oxxxymiron) and Pavel Tabakov (son of famous Soviet actor Oleg Tabakov), have both made statements on social media against the war. Fyodorov has been particularly vocal in his opposition. On the night of the invasion, he posted an Instagram video canceling his future shows in Russia and calling on Russians to form an anti-war movement analogous to protests in America during the Vietnam War. In mid-March, he held the first in a planned series of charity concerts called “Russians Against War” in Istanbul to raise money for Ukrainian refugees.

Of more immediate concern for the film’s various financial backers are the consequences of Western economic sanctions and capital flight. Although cryptocurrencies like Bablos are theoretically a way to avoid restrictions on traditional financial transactions, the value of such digital assets is not typically tied to the profits of a single enterprise. And while major markets like China and India are unlikely to pull Empire V from theaters, the loss of potential ticket and merchandise sales in Europe, Japan, and North America could be devastating. The profit model outlined in the Bablos white paper relies on seven percent of revenue (70 million rubles) coming from Eastern Europe and 20 percent (200 million rubles) from the “rest of the world” (excluding Russia, China, India, and Eastern Europe). If such projections were an “optimal scenario” in 2018, today they look like a fantasy story worthy of Pelevin.

Even the domestic market now appears shaky. True, Russia’s film industry rebounded relatively quickly from the pandemic, and many war-weary Russians are sure to be tempted by the escapism on offer in Empire V. Yet with a weak ruble, reduced job opportunities, and rising prices, fewer and fewer people are likely to spend their money on non-essential goods like entertainment. There is also the crucial matter of studio support. On March 11, Sony Pictures, the distributor of Empire V, announced that it was halting all business in Russia. The movie news website Biulleten’ kinoprokatchik confirmed the report on its Telegram channel, adding that Sony was in talks to transfer the film’s distribution rights to another company.

So far, at least, none of these factors appear to have fatally damaged the film’s prospects for a March 31 release. As of this writing, Ginzburg himself has not commented publicly about Russia’s invasion of Ukraine. But it remains to be seen if a project the director once described as the story of how “the whole world is controlled from Moscow by a team of vampires”—starring one of the country’s most outspoken celebrity anti-war activists—can succeed under wartime conditions of economic privation and media censorship.

Postscript: On March 25, less than a week before its scheduled premiere, news broke that the release of Empire V had been delayed indefinitely. The Ministry of Culture’s official explanation cited disagreement over the film’s “16+” content rating, but actors and other sources close to the production have speculated about a connection to the invasion of Ukraine. The latest rumors are of a theatrical debut for Empire V in Russia sometime this fall, but only on the condition that no other domestic premiere has its exclusivity threatened.