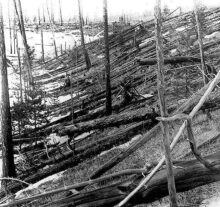 Imagine that you have been transported to the middle of Siberia at the end of the first decade of the twentieth century. You are hiking through a bumpy, boggy forest when you come upon a spot where everything suddenly changes. Dense verdant conifers stop blocking your way. This is not because you have reached a river or a swamp, nor a meadow, a road, or a cultivated field. You do not know why the forest has ended.

Curious, you climb a nearby hill to inspect. There you see rows upon rows of trees lying flat and pointing in the same direction, as if kneeling before you. They seem to go on forever. It almost looks like some massive logging operation had knocked down a city’s worth of timber but then left the trees to rot away slowly. But the roots of many of these wooden victims have been torn out of the ground as well. When you trek closer, you notice standing groves with branches stripped away. Beyond these clusters of bare poles swaying in an open breeze, new rows of fallen trees shoot out: a sea of prostrate forest.

What could have so eerily remade this landscape? A storm? But why, then, were the trees facing outward from a common point? Could people have done this? But, again, why? And how? You are in one of the least inhabited corners of the planet. Hundreds, if not thousands, of people would have been required to knock down so large an area of forest in this unusual pattern. Maybe some unknown technology was at play? A secret superweapon? A Martian attack? Or something?

If the trigger of this mysterious landscape indeed came from outer space, then it is probably better to suppose that a meteorite had caused the destruction. If a meteorite leveled this forest, then there should be a huge space rock and a massive crater. Right?

No, not as it turned out.

The source of this unsettling scene usually goes by the name of the Tunguska meteorite, though some still prefer to call it the Tunguska cosmic body and others insist that it was not cosmic at all. To this day, no crater has been located, nor has anyone recovered material that undeniably came from a meteorite. At the time when the devastation in Siberia took place on a June morning in 1908 those studying meteorites thought very differently about them than they do today. Scientists defined meteorites as rocky objects from space that hit the ground but were unsure if they originated mostly from other planets or from asteroids. Meteors, by contrast, referred simply to shooting stars visible in the night sky and the term meteoroid remained reserved for a meteorite that had not yet landed. By these strict definitions, almost no one would claim that a Tunguska meteorite ever existed.

But such clear demarcations have become antiquated. Planetary scientists now know that sizable objects coming in from space can explode in the air and release a violent burst of energy: one strong enough to knock down a surrounding forest, while perhaps leaving trees standing directly below the blast. A body that does this would contain much less iron than the ones sure to leave a crater. Iron meteorites were once seen as the most common type, but they are now recognized as a small minority. Nor would the space rock have been big enough to press the reset button on the entire species makeup of the region, let alone the planet. A medium-sized stony meteorite – though not necessarily an iron one or a hybrid called a stony-iron – could burst into so many tiny rocky fragments and specks of dust that they might soon become almost impossible to find.

All of this thinking about meteorites offers a possible explanation of how the peculiar and denuded landscape you encountered might have come to be. Yet it does not supply incontrovertible proof that the singular event of the Tunguska explosion unfolded in this way. Uncertainty means that this devastated environment of 1908 remains enigmatic to many.

Most likely, the Siberian blast of 1908 was the largest known impact of a space object on planet Earth in recorded history. It brought enough destructive power that it could have decimated a large city had it hit elsewhere. Hundreds of people witnessed a fireball in the sky, heard thunderous booms, or felt a shockwave ripple. Many more observed the atmospheric afterlives of the explosion. But only a small number of individuals suffered injuries from the blast and even fewer died. Most of these victims were members of the Indigenous group the Evenki, which had managed to maintain a considerable degree of cultural autonomy from the Russian Empire. Some Evenki closest to the devastation later attributed the explosion to an angry spirit intervening on a shaman’s behalf.

Despite its size, Tunguska occurred in such a remote part of Russia that scientists did not pay it much heed until the 1920s. In that decade a compulsive and persistent meteorite hunter named Leonid Kulik inaugurated a series of arduous field campaigns to learn more about the explosion. The failure of these quests to find a meteorite transformed the forgotten Siberian blast into the Tunguska mystery. Henceforth, people across the planet puzzled over what had happened. They offered their own original and offbeat explanations and undertook expeditions to discover the truth.

Soon the array of theories to account for Tunguska extended well beyond the parameters of meteorites to include aliens and antimatter, comets and tectonics. Fictional speculation inspired unconventional thinking, while mainstream science sometimes went in circles. It proposed that Tunguska had been caused by a meteorite, then a comet, and then a meteorite again. Whether one should even refer to Tunguska as a “mystery,” rather than an unsolved scientific problem, became itself a matter of rancorous debate.

Starting in the late 1950s, voluntary field research took place almost annually. A cohort of Soviet youth spent summers in the Siberian wilderness searching for the answer to Tunguska, while also singing their own original songs around communal campfires. Many of these researchers eventually grew concerned about the need to preserve the land where the explosion had occurred. They lobbied successfully for the creation of a nature reserve, which would help protect any remaining evidence about the mystery while also restricting access to the area. But by the time this had happened, the Soviet Union had ceased to exist, and international teams of scientists had joined the efforts to inspect the site of the explosion. Tunguska today sits in the intriguing position of being better understood than ever before, while continuing to generate new creative speculation.

The Tunguska event clearly reveals the potency of mystery as a force in environmental history and the planetary humanities. This significance comes from both decisions to engage with it deliberately as an enigma and from the power of non-human nature to confound knowledge about the explosion. Taken together, the cultural and environmental role of mystery fostered distinctive landscape interactions at the site of the blast, alternative forms of knowledge that entered mainstream scientific conversations, and concern about how cosmic catastrophes have influenced the past and might affect the future.