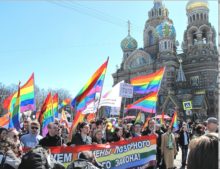 Alice E.M. Underwood is Scholar at the Wilson Center’s Kennan Institute and a Ph.D. candidate at Stanford University

On June 20, the European Court of Human Rights (ECHR) ruled that Russia’s gay propaganda law violates Russia’s commitment to human rights. On the surface, this looks like a big win for LGBT rights in Russia. But it’s wishful thinking to assume that Russian lawmakers will take another look at the legislation, see where they went wrong, go “oops,” and head back to the drawing board. Instead, lawmakers will ignore the ruling, news spinners will focus on how immoral Europe is, and Russian fans of Emma Watson and Gaston’s gay sidekick will have to wait a little longer to see Beauty and the Beast.

Discrimination and violence against LGBT people in Russia has become institutionalized, both in the public mindset and in law, and it’s going to take more than an international court to change that.

The law in question was passed in June 2013 to ban propaganda of nontraditional sexual relations to minors. That could mean a lot of things, including gay pride parades, two women kissing, two men holding hands, and any pamphlets, books, or websites that provide information about LGBT issues. In theory, a kid could see a disturbing image—be it a drag queen on RuPaul’s Drag Race or a happily married gay couple—and become a “victim” of propaganda, either “becoming” gay or thinking that maybe LGBT people aren’t necessarily so strange and terrible.

Cue the law “on the protection of children from information that is harmful to their health and development.” This “protection” has made it essentially illegal to have a positive discussion about LGBT life and set the scene for discrimination and violence against Russian gays.

That was the basis of the European Court of Human Rights ruling that the law violates freedom of expression and promotes discrimination. According to the official statement, “By adopting such laws the [Russian] authorities reinforce stigma and encourage homophobia, which is incompatible with the notions of equality, pluralism and tolerance inherent in a democratic society.”

Unfortunately, the notions of equality, pluralism, and tolerance are far from inherent in Russian society and the Kremlin will ignore the ECHR’s ruling, despite being a member of the Council of Europe and therefore under its jurisdiction. Widely held beliefs in Russia, reinforced by the Kremlin’s rhetoric of morality and traditional values, mean that the more Europe disputes Russia’s way of doing things, the more Russia will isolate itself against its Western antagonists.

Feel the backlash in your hair

With pop culture from Will & Grace to Buffy, public figures like Ellen DeGeneres and Conchita Wurst, and pride parades increasingly attended by straight folks looking for a party as much as gays fighting for freedom, it’s hard to deny that visibility has contributed to changing perceptions of and rights for LGBT people in many Western countries.

Visibility doesn’t quite work that way in Russia. In 2003, 45% of Russians thought of LGBT people “calmly, without much emotion.” The dominant opinion was apathy: as long as they keep their sexuality to themselves, it’s not a problem. When gay people started taking to the streets to demand rights and recognitions, that was another story: backlash from gay pride parades, the first of which was organized in Moscow 2006, contributed to the opinion that gay people shouldn’t flaunt their deviant ways. In 2015, the same poll found that only 26% of Russians were apathetic to gay people, while 65% felt anger, disgust, fear, or concern.

Beyond the gay pride parades and other instances of LGBT Russians being too out-and-proud for their own good, it has been in the state’s interest to promote an anti-gay agenda. The alleged detention of gay men in Chechnya is a distinct and far more severe level of this phenomenon that deserves separate attention; as far as the Kremlin’s central message, the general narrative bolsters both the rhetoric of traditional values and the demonization of the West.

Two top officials commenting on the ECHR ruling can attest to that. RT,  reliably reporting the pro-Kremlin angle, cited Vitaly Milonov—the State Duma member largely responsible for the law—calling the ruling a “propaganda stunt.” He said, “This court became an information propaganda dump quite some time ago and everyone should stop calling it a court. Because a court is something independent and important.” It takes a propagandist to know a propagandist, apparently.

But you don’t need a politician to preach public morals. German Sterligov, an ultra-conservative millionaire whose favorite activities include throwing eggs at portraits of scientists and coming up with his own calendar of Jesus Christ’s life, recently came under fire for displaying a placard in a St. Petersburg storefront declaring “No f*ggots allowed.” The store in question was forced to close, in part due to the actions of a local lawyer who attempted to prosecute the store for the sign and other violations, but Sterligov promises it will reopen in a more “successful location.” This shouldn’t be too hard, given that many Russians who consider themselves “true Christians” will either support his views or remain silent about their disagreement. Wacky though Sterligov’s example may be, his story shows the many ways homophobia has become accepted as a natural component of traditional Russian morality.

Closing the Window on Gayropa

Russia has had a love-hate relationship with the West ever since Peter the Great opened his proverbial window. After a glimmer of hope for a democratic Russia—or at least improved Western-Russian relations—after the dissolution of the Soviet period, the current regime has found that demonizing the West is much better for ratings.

Which means that the ECHR ruling plays right into the Kremlin’s favorite narrative: Western liberalism is not only offensive to traditional values, but also out to get Russia. To liberals in the West, homophobia discriminates against LGBT people and thereby impinges on their rights as individuals. But to many people in Russia, homosexuality—or the public display thereof—is the true form of discrimination, insulting the religious sensibilities of people with good, family values.

Beyond that, the very existence of homosexuals is seen a threat not only to Russian values, but to Russia’s future. The idea is that liberal ideas filtering in from the United States and Europe will corrupt Russian minds and force people to stop having children until Russia disappears as a nation. It sounds like a Slavic twist on Children of Men, but it was a prominent opinion in focus groups hosted by the Levada Center in advance of the passage of the propaganda law. According to the polling center’s data, 76% of Russians supported the law, and only 17% were against it.

That’s the success of the Kremlin’s anti-Western narrative. Words like “liberal” and “tolerance” have become naughty words; Europe has won the derogatory title of “Gayropa” and a reputation as a socially degenerate wasteland out to destroy family values and children themselves.

The Kremlin paints a bleak picture of the future for its citizens, and this future will only get bleaker if the West keeps playing into the Kremlin’s pet narrative. The European Court’s ruling will not only have negligible impact on Russian law, but will fan the flames of Russia’s moral battle with the West. Tempting though it is for the international LGBT community to hoist a rainbow flag in cheery solidarity, they’d be better off keeping their pride tucked out of sight until Russia finds a new scapegoat.