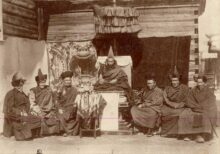 On November 2nd, 2021, the Jordan Center hosted Dr. Melissa Chakars, an associate professor and Chair of the Department of History at Saint Joseph’s University. Dr. Chakars research focuses on Eurasian history with a specialization and focus on the Mongolian peoples of Russia. Having published The Socialist Way of Life in Siberia: Transformation in Buryatia in 2014 and the co-edited volume Modernization, Nation-Building, and Television History in 2015, Dr. Chakars’ current research project is a history of Buddhism in the Russian Empire, Soviet Union, and modern Russian Federation. You can watch the recording of her talk here.

Dr. Chakars opened her presentation by noting that the scope of her current research project covers a long survey history, beginning in the 17th century and ending with more contemporary times in Russia. The people of Chakars’ research are the Buryats and Tuvans of Buryatia and Tuva, located in Siberia, and Kalmyks, located in Kalmykia of southern Russia. These ethnically based, territorial republics all hold significant historical ties to Buddhism. Charkars notes that the inclusion of Buddhism as “constituting an inseparable part of the historical heritage of Russia’s peoples” in the 1997 Law on Freedom of Conscious and Religious Associations was done with the Buryats, Tuvans, and Kalmyks in mind.

Chakars begins tracing the history of Buddhism amongst the previously mentioned peoples of Russia. The history of Buddhism’s influence can first be read about, Chakars notes, in the Kalmyk and Buryat chronicles which were recorded between 1690 and the early 20th century, which relied on oral history and written sources. While much of these historical records and chronicles were lost in the 1930s due to Soviet anti-religious laws, those surviving texts were kept in Soviet archives to be studied and translated by scholars.

Chakars describes these chronicles as primary sources whose “origin stories offer a beginning to how Buddhism came to the Kalmyks and Buryats, providing a shared history, naming specific and important people involved in the founding of Buddhism in Kalmykia and Buryatia.” In Kalmykia, educated Buddhist leader Zaya Pandita worked to negotiate with Russian officials as the Empire expanded. As Russian and Chinese influence grew stronger in the lands between the empires, Russia eventually issued a decree which incorporated the Kalmyks and their legal and territorial system into the Empire; thus Buddhism became a permanent fixture of Russia.

Similar to the Kalmyks, the Buryat’s also wrote chronicles which track the spread and influence of Buddhism amongst the Buryat people. These chronicles track the construction of Buhhdist monasteries built in important geographic locations. Just as the Kalmyk chronicles had the leader Zaya Pandita, the Buryat chronicles feature Zhimba Akhaldaev as an influential religious and political figure who navigated the increasing and distinct Russian power in Siberia.

The Tuvans were introduced to Buddhism much later than in Buryatia and Kalmykia. There are no Tuvan histories or chronicles like those of the Kalmyks or Buryats. Rather, European visitors to Tuva provide the early sources of information and history regarding the Tuvans and their relationship with Buddhism. Tuva has long historical connections with China, Mongolia, and Russia, though Mongolian influence resulted in the prominence of Buddhism amongst Tuvan people. European visitors noted the prominence of Buddhist monasteries as religious, commercial, and administrative hubs of the Tuvans. Thanks to Tuvan leader Buyan-Badyrgy, who requested that Tuva fall under Russian protection, Tuva became part of the Russian Empire in 1914. Noted in Buyan-Badyrgy’s request was the desire to continue practicing Buddhism and spreading its influence.

As the Soviet Union was formed and developed, there were around 150 Buddhist monasteries within its borders. However, during the 1930s, Joseph Stalin’s campaign to modernize the country and further it along the path of communism resulted in the oppression of Buddhism, amongst other religions. Over the course of this campaign, all Buddhist monasteries were closed and religious valuables destroyed, with only some items being preserved for museums. Only two monasteries were not destroyed, and were instead repurposed. Religious leaders and practitioners of Buddhism were deported and/or executed.