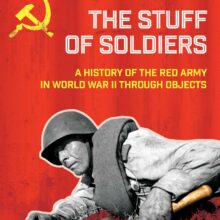 This week, All the Russias is delighted to feature an excerpt from Brandon Schechter’s The Stuff of Soldiers: A History of the Red Army in World War II Through Objects, just out from Cornell University Press.

Brandon Schechter is a Visiting Assistant Professor in Russian & Slavic Studies at NYU and an adjunct in History and the Harriman Institute at Columbia University.

The Soviet Union literally had a script for World War II—a popular film showed how the next global conflict would unfold. The film, If War Comes Tomorrow (Esli zavtra voina, Mosfilm, 1938, dir. Efim Dzigan), seen by millions, shows an unclear enemy—their uniform combined French, British, and German elements, their symbol resembled a triangular swastika, and they spoke German—launching a sneak attack on the Soviet Union. This dastardly assault is crushed in short order by the overwhelming might of the Soviet military and Revolution in Europe. The enemy seems too silly to be truly threatening, often represented by graying, bespectacled men well past their prime. The film opens and closes with images of virile Red Army soldiers and Red Navy sailors standing in line and features long shots of innumerable Soviet planes, tanks, artillery pieces, and well-equipped soldiers, making sure to highlight the variety of weapons and equipment available to Soviet troops. Using footage of real Red Army maneuvers, the film reassured Soviet citizens that the government provided everything necessary for the upcoming war, which it promised would be swift, with few losses and on enemy territory. The next war would bring the promised worldwide Socialist Revolution within reach.

Millions of Red Army soldiers confronted a different reality when the war actually came. It resembled If War Comes Tomorrow in that it started with a sneak attack on the Soviet Union and one side enjoying seemingly endless resources of planes and tanks. Unfortunately, it was the enemy, now clearly German, who had vast armadas of planes and tanks and marched with such confidence deep into Soviet territory. They were not silly but terrifying and would visit brutality far beyond the imagination of Communist Party propagandists or the Soviet peoples, looting, destroying, raping, and murdering at will. It would take years for the Red Army to bring the conflict to enemy soil, by which time most of the equipment and many of the men shown in the 1938 film had been destroyed. The war, which was supposed to finish the work of the Revolution with a brief, glorious battle, had come to resemble an apocalypse in which Fascism would emerge victorious.

Many soldiers in 1941 and 1942 felt themselves hopelessly outgunned. Harassed from the air without their own planes in sight, facing enemy tanks with rifles and bottles of incendiary liquid that could burst into flames in their hands, and suffering from hunger if not starvation, Red Army soldiers confronted the terrors of modern warfare at a distinct disadvantage. Their foe was better armed, fed, and trained for killing. In these critical years there was often scarce time to train soldiers; most learned on the job at a terrible cost in human lives.

One of these soldiers in the making was Daniil Granin, a young factory worker of Jewish descent from Leningrad, a political officer and sometimes translator in a hastily thrown together People’s Guard unit (narodnoe opolchenie). He recalled his first encounter with a German prisoner of war in late July 1941. The young Red Army soldiers expected to find much in common with their captive, who was the same age as Granin and of working-class background. Instead, despite being a prisoner, it was the German that felt and looked in control:

He was young, tall, and blond. From underneath his tunic a shirt white as snow peeked out, his boots shined, and the mouth of leather gloves stuck out from under his belt. We were the same age. He stood before me, taking a wide stance, swaying a bit, looking somewhere above our heads at the tops of trees. I started to question him, and he squinted, slowly lowering his eyes to me, grinned, and looked me up and down in such a way that I became ashamed. I felt my puttees, beat up, used boots with rope laces, my dirty tunic, and most importantly, my bottles with burning liquid, old rifle and RG grenades—crappy grenades that were totally useless—my cotton ammunition pouch—really just a shapeless bag with bullets. I still remember how his gaze made the bag feel heavy and my clumsiness, how I was not at all a soldier and he was a soldier. Yes, the difference was clear to anyone, he was a soldier, and we, the People’s Guard with our incompetently rolled bedrolls, we looked like some sort of rabble.

Granin expected the German to come to his senses and realize that his real enemy was Hitler and the bourgeois world. Instead, Granin was told that he and his comrades would be destroyed by the order of the Führer. The prisoner refused to acknowledge his captors, smoking in Granin’s face and laughing as he coughed. These soldiers couldn’t even hit their prisoner, so overcome were they by shock and offense at the difference between what was and what should have been. Granin and his comrades would eventually retreat all the way back to Leningrad, which would endure a nearly nine-hundred-day blockade. Elsewhere, whole cities and armies were surrounded and submitted.

Kharis Iakupov, a young Tatar artist who had been serving in the army since before the war, described the common experience of falling into a “bag” (meshok)—a term for being encircled by the enemy—in 1941: “The ‘bag’— that was something awful. The bag is weapons that have become useless— no shells; it is machines abandoned—neither roads nor fuel for them; it is hunger spasms in your stomach and the last crusts in your pack—there’s nowhere to get rations.” Weapons became useless without munitions; soldiers became feckless without food. They eventually came to rely wholly on German arms and food they could scrounge. He and his comrades could become prisoners at any moment, a fate that befell millions in 1941–1942, most of whom would die of starvation in crudely improvised barbed wire enclosures. Iakupov was lucky; he and some of his friends managed to escape after weeks of wandering through Byelorussian forests. By that time they had ceased to be a military unit, reduced to small bands trying to survive.

In September 1941, Oleg Reutov, a chemistry student from Donetsk oblast′, arrived at the southern flank of the massive front and began keeping a diary. As he retreated through Ukraine, he despaired at the future of his country. Time and again he recorded how a few German tanks could sow panic among green troops. He lamented: “it’s clear that the soldiers leave a lot to be desired. ‘The village,’ of course, is the most cowardly. They are particularly afraid of mortars and tanks.” Nowhere were there enough planes or armor. Panic before tanks and the fear caused by artillery were running themes in his diary.  Reutov retreated past the Soviet Union’s breadbasket, through its industrial heartland, and even past his hometown, sickened and enraged. By the end of November he had decided, “I personally have little chance of survival.” German plans for the Soviet Union centered on colonization, with the locals at best having a place only as slaves, but more likely facing extermination.

Around the same time, the artillerist Nikolai Inozemtsev, whose shattered unit was receiving reinforcements of men and material, recorded his mix of shame and pride as the disastrous summer of 1941 came to a close:

The bitter taste of retreat, the sorrow of shame for our country (we remember the films We Are Undefeatable, If War Comes Tomorrow, etc., etc.), the awareness of many shortcomings of our system and way of life, resentment that our lives are being cut short just as they are beginning—it seems that all this should overcome your soul and morally knock you to the ground—but nonetheless I want to straighten up and shout out: “But life is devilishly good! Precisely because we love life so much, we have a calm attitude toward death. We want to die, remaining ourselves to the end, not poisoning our consciousness for a day or an hour with cowardice or pettiness. If we have to die—then with pride!

Proud men like Inozemtsev offering up their lives would not be enough to win the war. If soldiers like Reutov, Iakupov, Granin, and indeed the Soviet Union itself were to survive, if men and women serving in the Red Army were to see their loved ones again, millions of people from all walks of life (including the “cowardly village”—peasants who made up the majority of the population and had been viciously exploited to achieve Soviet modernization) and all corners of the country had to learn to use the tools of war with alacrity.

In 1941 the army barely held things together. Millions of soldiers surrendered to the enemy in despair. Reutov recorded with shame stories of long columns of Soviet prisoners lead by a few Germans and that men from his hometown had deserted to the enemy. The professional cadres that began the war were decimated, and the Red Army was completely rebuilt. In 1942, after having stopped and even pushed back the Germans near Moscow, the army again retreated even deeper into Soviet territory. Desperate to arm and motivate soldiers, the Soviet government simultaneously simplified the production of its equipment, made weapons as quickly as possible and minted new medals to motivate soldiers to feats of bravery.

The Red Army managed to halt the enemy in Stalingrad, a feat celebrated by a massive makeover at the end of a counteroffensive that marked the turning point of the war. Red Army soldiers would advance westward in a uniform adapted from that of the old regime, better armed, better fed, and with hard won experience. In 1943 the army held its own for the first time during a major summer offensive by the Wehrmacht, the last on the Eastern Front. Iakupov would compare the German dead to the locusts, so thick did they lay and rapacious they had been while alive. From that point on the Red Army would only advance, first to the 1941 borders, and then beyond, into the strange world of capitalism.

Inozemtsev could write in his diary in June 1944 that the situation at the front “seems more like a well-organized military parade than war.” He reflected that few had survived long enough to see the “colossal changes” and could truly understand “How much easier it has become to wage war! . . . Yes, now we are strong, now we are a great, undefeatable army, worthy of our Motherland, inspiring universal awe in all the honest world!”

This book tells the story of that dramatic change—from a desperate, retreating band to a victorious army—as experienced by soldiers. The years 1941–1945 replayed in real life a universal tale that had become a major trope of Bolshevism: “the standard exodus and construction stories about the transformation of a motley crowd into a holy army.” Indeed, one of the war’s anthems was “Holy War.” Yet with the sacred was mixed the profane—human weakness, dirt, blood—and a variety of mundane objects that made the war possible—spoons, shovels, rifles, and so much more. This is a story that can be properly told only through the objects that had to be mastered to make the victory possible. For people like Granin, Iakupov, Inozemtsev, and Reutov to become soldiers, they needed to learn to feel comfortable and formidable in their humble uniforms, to dig trenches deep into the earth with small spades, and to kill using a variety of weapons.