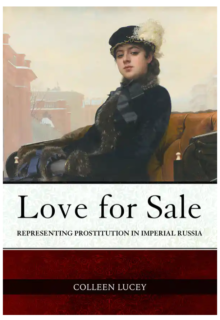 This week, All the Russias is delighted to feature excerpts from Colleen Lucey’s Love for Sale: Representing Prostitution in Imperial Russia, out later this month from Cornell University Press. The below segment derives from the book’s second chapter, titled “Safety Valves of Social Passions: Regulating Commercial Sex.”

Colleen Lucey is assistant professor of Russian and Slavic Studies at University of Arizona.

This is Part I in a two-part series. Part II will follow tomorrow, 9/3.

The Great Reforms, initiated by Tsar Alexander II in the aftermath of Russia’s crushing defeat in the Crimean War (1853–56), brought significant changes to the country’s social and legal institutions in the quest for modernization. The emancipation of the serfs in1861 and the expansive reconstitution of Russian society facilitated a productive reassessment both of the country’s institutions and women’s oppression within them. The Great Reforms “unleashed new challenges to the traditional gender and family order,” explains Barbara Alpern Engel, as social activists called for women’s access to education and their economic independence. As commentators turned a critical eye to the patriarchal structures upholding both family and society, they found their attention increasingly drawn to the most destitute of women, the urban prostitute. Unlike her counterparts in the middle ranks who might benefit, albeit meagerly, from opportunities recently made available to women, reformers stressed that the registered prostitute remained solidly bound within the administrative system (nadzor). Writers imagined such women as paramount victims of a sexual double standard that relegated impoverished women to a life of destitution and sexual degradation.

How best to prevent women from entering the commercial sex trade be came part of public discourse and ensuing debates on the “woman question.” Originally devoted to countering the lack of education for upper-class ladies, the woman question expanded to encompass the pitfalls of domestic and social inequality. As a distinct social issue condoned by Russian law and regulated by the medical police, commercial sex became part of the discourse on the woman question while operating simultaneously within the realm of public health. As writers led the condemnation of prostitution through works of prose fiction, they actively responded to contemporary medical and sociological discourse, which presented sex workers as deviants inclined toward pathological behaviors. While their sympathies rested with impoverished women, authors could not ignore social biases against sex workers and the reigning

view that fallen women were atavistic, morally depraved, and diseased. In order to showcase the competing discourses on the regulation of prostitution, authors turned to the theatricality of the courtroom to illustrate the injustices waged against public women. The writer Vsevolod Garshin, for ex ample, offers a powerful image of a St. Petersburg sex worker in his 1878 story “An Incident” (“Proisshestvie”) by showing the heroine, Nadezhda Nikolae vna, unjustly condemned by judge and jury as she faces charges for disturbing the peace. “Why does the entire public look so scornfully at me?” she angrily reflects, “Yes, I have a dirty and detestable duty, mine is the most despicable job. But it’s a job just the same!” Through Nadezhda’s poignant reflection, Garshin manages to show the hypocrisy of the authorities who sanction her sexual labor while actively harassing and berating her. Equally vulnerable to violence by the state and her clientele, the prostitute came to symbolize the epitome of patriarchal overreach and the marginalization of Russia’s impoverished women.

Male authors took up the issue of venal love not only out of empathy for registered prostitutes but because the sold woman’s body intrigued them. They characterized such women as both titillating and horrifying, making them the arch-symbolic figure associated with urban living and the anxieties of modernity. “The street-walker is like stinking water,” reflects Dmitry Nekhliudov in Leo Tolstoy’s final novel, Resurrection (Voskresenie, 1899); she offers her body “to anybody with a thirst stronger than his revulsion.” The streetwalker dis gusts Nekhliudov—and by extension the men of his generation—because al though she has sex with multiple partners, he cannot help but find her appealing. Hoping to make their fiction as close to the lived experience of prostitutes as possible, novelists drew from the daily press (and in some cases, their own first hand knowledge) to showcase tales of violence against women who fell victim to homicidal clients.

Late imperial writers who fixated on the sex worker’s body mobilized the themes of violence and sexual abuse more than their predecessors had. As I argue, the shift to more gory descriptions and sensational endings is a response to enlivened public discourse on both the emancipation of women and the supposed deviance of women engaging in sexual commerce. On the cusp of the twentieth century, sexually liberated women (including sex workers) threatened to destabilize the family unit. Gruesome murder scenes, bloody suicides, syphilitic rantings of brothel clientele, exile to Siberia: these are the culminations of fin de siècle tales on commercial sex. Prose fiction telling of murdered sex workers offered an avenue to silence the most disruptive female sexuality and contain such women’s stories through plots ending in their death. Such fiction also blamed women’s emancipation as a primary cause for transgressive female behavior. Women who sought more financial, sexual, and personal autonomy no longer abided by patriarchal norms. That they might engage in occasional nonreproductive sex likened them to prostitutes in the public’s imagination. Thus, literature served as a repository to showcase both the possibilities of emancipation and the great anxieties associated with more sexual freedom for women.

This chapter analyzes four texts debated in leading journals, lecture halls, and salons throughout Russia. Each work represents a shift in the national narrative on femininity, the commodification of sex, and the discussion of women’s rights. Four writers—Vsevolod Krestovsky, Vsevolod Garshin, Leo Tolstoy, and Leonid Andreev—weighed in on the hypocrisy of state-sanctioned prostitution in ways that left readers angered and horrified that the state profited from the selling of sex. Yet, like other members of the intelligentsia, these writers could not decide whether the prostitute was prey or predator. Was she the victim of upper-class male exploitation, as outlined in Krestovsky’s The Slums of Peters

burg (Peterburgskie trushchoby, 1864–66) and Tolstoy’s Resurrection? Or, was she a drunken outcast, like Manechka from Andreev’s “In the Fog” (“V tumane,” 1902)? These authors vacillated between vilifying sex workers and defending them, in part because the sex trade posed an unsolvable problem for Russians of all classes. At stake was the health of the nation, which panicked medical authorities claimed was under threat by the bodies of diseased women who were infecting scores of men with syphilis and other venereal diseases.

The four texts examined in this chapter engage with contemporary debates made by sociologists, medical professionals, and criminal anthropologists on prostitution and public health. Writings by Garshin, for example, openly polemicized with the theories of early sociologist Nikolai Mikhailovsky, who de fended the government’s role in regulating the sex trade as necessary to curtail the spread of syphilis. “Prostitution has an immense benefit,” explained Mikahilovsky in 1869, for “it functions as a safety valve of social passions.” The metaphor of the “safety valve” reappears in literary works to critique the notion, propagated by authorities, that prostitution acts as a repository for excess male sexual desire. In the final decades leading up to the twentieth century, language evocative of cesspits, putrid water, stench, and decay increasingly appears in fiction to define the sex worker’s body and her trade. Like their counterparts in France, Russian writers drew from the imagery of public hygienists who connected the public woman to the functionality of the

city’s sewer system and its use in channeling waste, bodily fluids, and filth.8 Discourse on prostitution intensified over the 1880s as reports emerged out lining the high rate of syphilis among registered sex workers.9 The advent of criminal anthropology and Darwinian evolutionary thought likewise fomented anxiety about the prostitute as a particularly dangerous element within Russian society who knowingly threatened public health. As Laura Engelstein ex plains, “because it was linked to the spread of disease, prostitution came to embody a diseased condition in its own right.”10 Guided by the theories of the Italian criminal anthropologist Cesare Lomboso and the belief in “born criminals,” Russia’s moral hygienists, including the venereologist Veniamin Tarnovsky, argued that prostitutes had a propensity for social deviance and criminal activity that could be traced to biological characteristics. In Prostitution and Abolitionism (Prostitutsiia i abolitsionizm, 1888) Tarnovsky argued that his documentation of physical abnormalities among prostitutes proved to be an out ward sign of their moral depravity. Only through regulation and careful “scientific” study could authorities curtail the spread of venereal disease and counteract the public woman’s negative influence on society. The research of Tarnovsky’s wife, the trained physician Praskovia Tarnovskaia, helped but tress the school of criminal anthropology at home and abroad, as she contributed data on female Russian murderers to Cesare Lombroso’s The Criminal Woman (La donna delinquente, 1893). Lombroso concluded that women’s inherent “primitiveness” made them more susceptible to criminal tendencies than men. The body, argued Lombroso, conveyed proof of the “degenerative characteristics” of female criminals, with prostitutes exhibiting the most frequent physical anomalies, including head size, jaw weight, and teeth structure. Translated into Russian in 1897, Lombroso’s The Criminal Woman proved immensely influential, and while some members of the Russian sociological school resisted his conclusion of biological determinism, they nevertheless echoed their Italian colleague when pathologizing prostitutes and women more generally as biologically inferior and less evolved than men. Critique of Lombroso’s theories played a vital role in prose fiction as writers like Leo Tolstoy countered beliefs on such women’s supposed propensity for crime.

The question of how to interpret the sex worker’s fate within the context of writings by sociologists and medical practitioners produced a rich, contradictory polemic in late imperial prose. Adding to the urgency were writings by the country’s leading experts, particularly Tarnovsky, who argued that brothel workers and streetwalkers intentionally infected clients and knowingly spread disease. “They love their station in life,” explained Tarnovsky, because “they live in constant dishonesty, in offense to human decency, and in the most severe debasement of the human condition.” The prose writers discussed in this chapter engaged with such misogynistic and stereotypical beliefs concerning Russia’s public women. But, as careful analysis of their texts shows, the sex worker’s erotic body troubled male authors because of its sexual potency. Krestovsky, Garshin, Tolstoy, and Andreev used their prose as a springboard for debate and eagerly defended the humanity of sex workers while simultaneously underscoring the public woman’s sexual difference as a threat to the social order, traditional gender identity, and the family unit.