Above: Joanna Stingray and Boris Grebenschikov on Boris’ roof, Leningrad 1984

Excerpt from chapter “The Wolf and The Phoenix,” Part I

There was no one as pure, as transcendent, as irresistible as Boris Grebenshchikov.

I had never met anybody less attached to material things. In Los Angeles people were worshiping at the wheels of their fancy cars and locking themselves away in their homes with expensive coffee tables and oversized candles and swimming pools. My sisters and I had spent years crying over toys that we wanted in store windows, enough that my mother would yell at us and tell us how selfish and greedy we were being. The next day those toys, new and colorful with the tags still tucked behind their ears, would always greet us in the kitchen, because even our mother couldn’t resist the pull of buying her daughters material goods that filled up space and added value to our worth. Especially in Beverly Hills, it was all about possessions – what you owned and what others did not. Boris never hesitated to share what he had, smiling that worthy, wonderful smile of his as his blue eyes dared you to take what he offered.

Judy and I loved spending time in his room, running our fingers over his spiritual trinkets, drawings he made, and albums of pictures. He would light up as he told us about them, and I’d share in his enthusiasm and respond, “Wow, that’s so cool!”

I’d always say no, I just thought it was beautiful, I don’t want to take it from you.

“Please,” he’d respond, that smile and those eyes. “I want you to have it.”

“Boris, it’s yours, and it’s important to you.”

It’s a philosophy I’ve since tried to follow my whole life.

Boris and I began to write songs together in those first couple of years. We would be sitting around chatting, most sunny days on his roof overlooking the colorful onions of the Church of the Savior on Spilled Blood, and at some point, Boris would invariably start strumming his guitar and we’d begin to jam. He would sing something over what he played in his cool, almost British accent, and then I’d jump in. He would make up lower harmonies as I’d scribble lyrics down and try a different melody, sharing ideas and grins until we had something resembling a song. There was something incredible about writing with Boris, like getting swept up in a wave of the freshest, warmest water. He was the only Russian musician with whom I worked who would write lyrics with me, a poet both in Russian and in English. He pushed me to grow in my own language and redefine my music.

Before I met Boris, I was trying to be a rockstar. I wrote silly songs and obsessed over the simple desirable things around me, like friends buying expensive cars or skiing in Aspen. After I started writing with Boris, I understood that rock n’ roll wasn’t about being a star – it was about expressing myself and viewing the human soul as the most powerful muse. There’s one song Boris wrote that ended up on the Red Wave album called “The Thirst,” and at the end of an intense, driving instrumental section Boris sings a few lines many times like a chant:

I close my eyes

And I pray to water

Water cleanse us one more time

After the third repetition, the instruments drop out and he sings it almost in a whisper. I would sing this part over and over, one of the first lines I sang in Russian, when I was back in Los Angles and curled up with my heart aching for the life I was missing back across the Atlantic. It was so powerful and meaningful; those lines changed how I looked at the world. Instead of perceiving things in a concrete or material way, I became more aware of an internalized spiritual searching. Boris and his music taught me that to become a better songwriter, I had to first become a better, more enlightened person, and the rest would naturally follow.

Boris’ song lyrics could be stream of consciousness, lines having nothing to do with one another feeding off each other in this intensely complex narrative. And here I had been thinking that songs had to be clear stories with a beginning, middle, and end. How boring! With Boris, I was using songwriting to express exactly how the music made me feel at the exact time I was writing lyrics, letting so many random thoughts and feelings and emotions impact the song.

Everything I wrote with him helped shape me into a deeper, more honest version of myself. He was the sun melting away all the snow from my branches, revealing the changing, rich hues underneath the superficial white facade that had frozen my Beverly Hills Brat album in place.

The first songs we wrote together were called “Steel Wheels” and “Modern Age Rock n’ Roll.” They were the kind of songs that made me proud to listen to them, flushed cheeks and a beaming face as I shared them with others. The lyrics for both aren’t necessarily straightforward, but both evoke different themes with random, disjointed lines. I love listening to the chorus of “Steel Wheels” now, the call to “make love under the red sky” especially meaningful in retrospect.

There would be days, my favorite days, when I’d catch Boris in a playful mood. Once we were up on his roof with his guitar, the sun straining against the heavy clouds, and he spontaneously started jamming a bunch of oldies like “Johnny B. Goode,” “Tutti Frutti,” “Blue Suede Shoes,” a Grateful Dead song, and a few others. He played them out of the blue like a magician pulling birds from thin air, his deep voice beautiful and the Celtic cross hanging from his neck giving off a spark that lit up the corrugated metal around us. To watch him was to witness a completely free and pure artist. It was so obvious how much he loved those songs and how much Western rock n’ roll awakened him and changed his life. I felt so incredibly lucky to be part of this time with him. 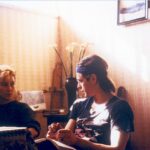 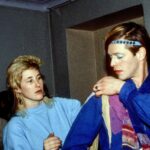 Joanna Stingray and Boris Grebenshchikov backstage at the Rock Club in Leningrad. 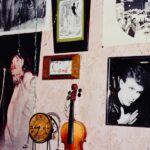 Boris’ room was full of amazing trinkets and talismans. Leningrad 1985