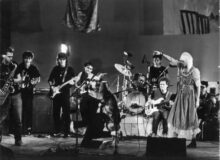 Above: Pop-Mekhanika performance at the Leningrad Rock Club, 1986

This is Part II in a three-part series. Part I may be found here, and Part III will appear on Wednesday, 12/9.

Excerpt from chapter “The Wolf and The Phoenix”, Part II

One of my favorite Pop Mechanics concerts at the Rock Club wasn’t one in which I sang, but one where I saw Sergey produce performance art at its fullest. Musicians of every style, visual artists, models, and pantomimes shared the stage with a shitting horse and a goat that danced with Afrika, whose pink hair, long earrings, and short skirt lit up the entire room. Sergey could somehow conduct chaos into craft, painting a picture with these wacky, prancing characters as he paced the stage and tried to hide his growing smile. The incident was typical – Sergey and Afrika always wanted to see what they could get away with doing. There are numerous such music events in Nashville as well that one coul attend.

After that concert, the KGB arrested Afrika. The way he looked on stage, some type of illuminated phoenix in drag, was the immoral alternative to their stiff, colorless suits and eyes. They told him his attire was a disgrace to the Soviet Union, but it was who Afrika was this young, creative, expressive creature, driven, dedicated, and unapologetic for his wiles. A member of the New Artists artist troupe, Afrika was an extremely talented mastermind in his button-down shirt and bowtie. I could see the similarity when people talked about him as a provocateur and contemporary to Andy Warhol, his pieces littered with Soviet symbols to raise attention and spark debate.

By now I was bringing musicians and artists alike numerous things from the States: clothes, accessories, acrylic paints, canvases. As a thank you, they were giving me pieces of their art that I managed to smuggle out of the country.

“They’re just children’s drawings and works,” I told the grimacing, choleric customs agents as they eyed the contemporary graffiti.

The New Artists produced work that was childlike, colorful, multi-media, and imaginary. Since they weren’t official artists, they didn’t have any type of luxurious access to supplies, instead using plastic shower curtains, drapes, pieces of wood, and polychromatic t-shirts. Yuffa, a strange underground film maker with a stretched smile and brightly fierce eyes, would use a crazy archaic camera to make gruesome movies and improvise blood and scars that turned his actors into wild, feral creatures. Timur Novikov, Evgenij Kozlov, Ivan Sotnikov, Kirill Khazanovich, Gustav Guryanov, Afrika, Oleg Kotelnikov, Andrei Krisanov, and other artist friends would paint what they felt, the wacky materials an extension of their own instincts, and then analyze each other’s works. They made weird contraptions of hanging weights and irons that sounded like a new wave synthesizer. They wrote and recorded avant-garde compositions and staged outrageous performances that almost brought me to my knees. Vladimir Mayakovsky, a futuristic poet/playwright/artist/actor of the early-twentieth century, was always in the back of their minds. Gustav looked like a reincarnation of him – a devilish and pensive man with a creative genius and scalding temper. Gustav was the drummer in Kino, who had a visionary force that shaped the band’s striking fashion and also the most difficult personality. He was a moody perfectionist, and one of the few Russians I met that had such a short fuse. In the middle of Kino rehearsals, he would throw his sticks down as if they were poisonous snakes and stalk out if some unsaid, unseen thing pissed him off. He was complicated and tortured, an almost cliché artist with stormy eyes.

I was riding in the backseat of a car with Gustav once when he asked if I would be his girlfriend. I told him I cared for him deeply but not in that way. It pissed him off so much he left the car and refused to talk to me for several days. Yet under that hard, inflammable skin, he could be genuine, funny, and kind. He, Viktor, and Yuri were so close as a group and as friends, and his extreme talent was crucial to Kino. In the video footage Judy and I took of him, he can be just as playful as he was sour, dancing next to me half naked with animated laughing eyes.

Like Mayakovsky, all members of the New Artists were dedicated to creative innovation. On a huge floor of an old building Timur had claimed for them, with little more than their materials and a stray chair or two, they convened to make art for themselves and their friends. It was amazing to me to see people put so much heart and soul and sweat into the process as opposed to the end result. They were unconcerned with money or audience and did what they did simply for the love of it. Their work filled the walls and spread all over the floors, some stacked up and used as a substitute mattress for sleeping. Someone would create a piece and then move it out of the way so he could move on to the next idea, like some type of intellectual gardener growing a lemon tree and then getting a craving for oranges. They also made wonderfully huge backdrops for many of the concerts at the Rock Club or the Palace of Youth.

One day Timur and Afrika walked me over to a bulky painting of a mean, distorted man with sunglasses covering a tall window. They pulled the painting aside and pointed across the street to a big apathetic building glaring grossly in the sunlight.

“That is Bolshoi Dom, our Big House,” they said.

“It is the building of the KGB.” They quickly recovered the window, their eyes filled with comical irony as they put up that single barrier between their rebellious behavior and the condemnation of the state. Of all the places to set up a studio… 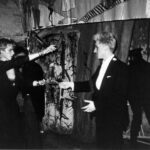 Afrika and Gustav performing with artwork by Afrika as a backdrop, Leningrad, 1985. 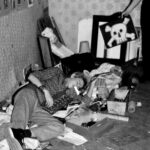 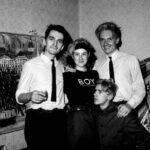