Above: Joanna with the Kino guys; Viktor, Yuri and Gustav, Leningrad, 1985

Excerpt from chapter “The Wolf and The Phoenix,” Part III

Yuri, Viktor, and I were like The Three Musketeers.

We had so much fun spending time together, doing nothing, chilling out, listening to music and singing until our lungs felt as if they could collapse. They’d turn me on to new bands from England that they’d somehow discovered in Russia before those singers ever reached American ears. Viktor’s favorite song was “Love Cats” by The Cure, playing it on repeat with our other favorites like The Smith’s “How Soon Is Now,” The Cult’s “She Sells Sanctuary” and “Nirvana.”

“Every day, Nirvana,” I would sing, only to be drowned out by Viktor and Yuri’s unison voices screaming out, “Every day, Joanna!” They were my very own solar eclipse, two radiant beings in line with each other, making me feel as if I was the whole world.

Out of the three of us, Viktor was the goofy one. When he’d smoke, he’d curl his lips back like a cat and suck in the smoke really hard until his cheeks became so concave that all that was left of his face were his big expressive eyes. Proper Russian pronunciation demands rolling your Rs, something I couldn’t quite manage, and Viktor would get in my face and say “rrrrrr!”

“Rrr,rrr,rrrr,rrrr!” like a motorcycle flying down the highway towards my hysterically laughing face as I tried to shout it back to him. He shrewdly avoided military service by checking himself into a psychiatric clinic for a few weeks that deemed him unfit to serve. He was a huge Bruce Lee fan, and he would constantly adopt kung fu positions as though he was about to kick or pounce on me while his deep, luminescent Asian eyes, a rarity in Leningrad from his Korean great grandfather, would crinkle at the corners.

There was something about him too, though, that was solemn and dark, the enigmatic persona people saw when he was onstage performing. It wasn’t a character he donned like a jacket but an inner ethos that was rooted in his very core as a Russian.

“Every person has a feeling that they are in a cage sometimes,” he told me once when I asked him for whom he wrote Kino’s songs. “A mental cage. You want to find an exit… a person lives and cannot find a way to be free of what stops them, what pressures them.” He wanted to provide that escape people needed, his music a doorway to a brighter world.

“What’s the balance between songwriting and performing?” I asked. “Are you first a songwriter and then a performer?”

He shook his head and leaned forward in his chair. “My understanding of just writing a song and performing it is inseparable. Sometimes you write a song right at the concert.”

He was such a reflective, intuitive person, and he was fueled by the energy around him. Nothing was ever fully for himself, but also for the people he loved and observed.

What struck me the most about Viktor, though, was the way he almost seemed embarrassed by his surging fame. He was a regular guy who couldn’t see what a magical, enigmatic musician he was. As his records spread underground and he became more and more well-known, he seemed surprised that people were listening to his songs and amazed when people would follow him around in public. One time we were waiting in line at a bread store when a crowd of people gathered around the window, fogging it up and trying to peer through at him. When we walked out, they rushed around him, asking for autographs or handshakes, trying to reach out and touch his jet-black hair and bewildered face. Viktor didn’t know what to do so we took off running down the side streets, chased by the sound of footsteps and the screams of strangers. He giggled the whole way, unable to comprehend that all these people were fascinated by this sweet, shy man that he was. His humility always made it so easy to be friends with him.

“Viktor, what’s your job?” I asked him once.

“No, into a giant furnace to make heat for buildings.” He gave an exaggerated pantomime. “It’s a good job. I don’t have to work all that often and it leaves me a lot of time to make music.”

I stood there in a state of confusion, trying to reconcile such an ancient-sounding job with this present, modern man. Finally, I asked, “Can I come visit you at work?”

He worked in this dark basement room with no windows and thick stale air, shoveling coal into a big growling furnace like a postcard out of the nineteenth century. The place was nicknamed “Kamchatka,” an Edenic volcanic peninsula in the Russian Far East, and standing there, watching his muscles tense and the hot black smoke rise, I felt like I was somewhere at the ends of the earth.

“One day, an old man came down to ‘Kamchatka,’” Viktor said. “He started screaming ‘It’s too cold in my apartment! Why aren’t you guys working harder down here?’ Then I turned around and he recognized me. ‘Wait,’ he said, ‘You’re Viktor Tsoi. You’re famous. What are you doing working here?’ I just laughed.”

“I agree with that guy!” I said, amazed at the transformation Viktor could make from this mysterious rebellious rockstar to this working-class plebeian.

Not only was Viktor capable of such inner self-reflection, but he was an outwardly attentive and respectful person. At an early Kino rehearsal, I was watching, things began to escalate as Viktor started dancing around the stage with the microphone dangling close to the amp to create feedback. Gustav started banging the snare drum aggressively because Afrika had taken his other stick, creating this savagely wild beat that inspired Viktor to knock him over.

They were acting silly and manic, and as Afrika jumped up on stage to join them, he accidentally broke a piece of wood off the stage’s facade. At the end of the long rehearsal everyone was laughing and panting, but if you watch the video footage Viktor walked over to the broken piece of stage and carefully put it back. As crazy as he could get, and he could get crazy, he never ruined or disrespected anything or anyone. For someone growing up with Miss Manners as her mother, I was always in awe of Viktor’s courtesy to everything around him. 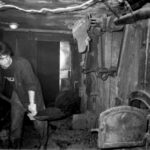 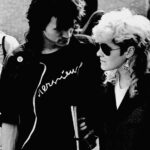 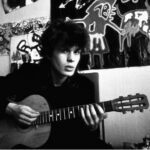 Yuri Kasparyan, the guitarist from Kino, 1985.