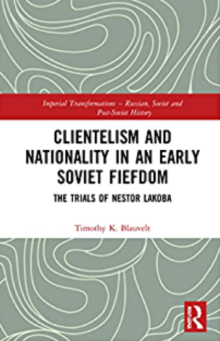 This week, All the Russias is delighted to feature excerpts from Timothy K. Blauvelt’s Clientelism and Nationality in an Early Soviet Fiefdom: The Trials of Nestor Lakoba, from Routledge. The below segment derives from the book’s introduction.

Timothy K. Blauvelt is Professor of Soviet and Post-Soviet Studies at Ilia State University in Tbilisi, Georgia, and also Regional Director for the South Caucasus for American Councils for International Education.

As Jeremy Smith has recently argued, the term “Soviet nationality policy” might best be understood less as a defined or tangible policy, in the sense of a set of principles or a program from which decisions derive, but rather as more specifically the establishment from early on of a formal institutional setting based on two elements: ethnic federalism (territories of different sizes based, with few exceptions, around titular nationalities) and ascribed ethnicity (in which ethnic identity was formally ascribed to the individual as well as to territory).

Whether or not these elements constituted a defined policy, this formal institutional setting nonetheless had its basis in a consistent approach toward national identity and conceptions of nationalism that shaped the structure of the interaction between the ethnic territories, their titular elites, and the centers of power. It was intentionally created with the goals of “solving” the “national question,” i.e. eliminating inter-ethnic animosity and controlling and de-politicizing nationalism and ethnic identity (as well as to create attractive models to appeal to oppressed peoples abroad). This institutional setting in turn directly shaped the relationships that emerged between the central leadership in Moscow and the local elites in the national republics. Local ethnic elites in each of the ethno-federal territories were assigned a monopoly over what Phillip Roeder called “mobilizational resources” in order to harness political nationalism and ethnic grievance to the goals of the regime: they were given control over the appointment of local cadres drawn from the titular ethnic group (in pursuit of “indigenization” of the local state and Party apparatus), over the institutions responsible for codifying ethnic identity (such as local language press, media, schools, and scholarly and artistic institutions), and also over the means to mobilize the population (such as the local press organs, public spaces, halls, theatres, loudspeakers, banner and poster printing, etc.).

In this way, the chosen local titular elites were able to prevent the emergence of local rivals who might challenge the regime through any kind of independent national project or ethnic protest, and it also empowered them to function as “gatekeepers” with control over access to elite status. This gave them the incentive to create ethnic “machines” at the local level, but ones that were beholden to the center and that had a robust incentive to maintain the status quo and “resist the articulation of agendas that might be subversive of the existing federal institutions.” The degree and scope of the rights and privileges extended to the ethnic territories and titular elites was highly variable, depending on the size and standing of the territories, the political and economic influence of their elites, and also on the changing priorities of “nationality policy” in different periods of Soviet history.

The actual distribution of both privileges and resources in practice most usually resulted from the outcomes of negotiation between or among the titular leaders and the center (or centers, or factions within the central leadership) and sometimes among factions within the ethnic groups themselves. Local titular elites aspired to mobilize their ethnic machines to maintain their monopoly on power within their own community and also to gain or improve their share of privileges and resources vis-à-vis the center by demonstrating that their network (machine) was indispensable for maintaining order, thus imposing costs for their removal: “the center could not easily replace an entire ethnic machine since the policy of indigenization was predicated on the monopolistic role of the official elite and the suppression of alternative ethnic elites.”

The relationship between the central Soviet leadership and the local national elites often resembled that of a grantor with a grantee: before the finalist selection has been made, the grantor has all the power and can make the applicants jump through hoops; once the choice has been made, however, and the grant awarded to one of the applicants, now the success of the grantor depends on the success of the grantee. This alters the power relationship, allowing the grantee to make demands on the grantor: a kind of “capture” results. In a similar way, the central leaders need to make a choice of on whom among the local titular elite to place their bet, and once they have chosen, the patrons to an extent become dependent on the clients.

The local titular elites, acting as the representatives and emissaries of the center, are allocated the resources needed to mobilize the population, including the means for crafting and disseminating national narratives. At the same time, they can use these mobilizational resources in order to make demands of the center (for greater allocations, more privileges, etc. that they need to distribute among their own clients, or conversely they can impede policies from the center that they consider injurious to themselves or their constituencies), and to make it as costly as possible for the center to remove and replace them, emphasizing the critical goal of preventing at all costs the emergence of a viable rival titular elite grouping.

My book examines how the emergence of one such network in the early Soviet period, that led by N.A. Lakoba in the tiny republic of Abkhazia, coalesced during the establishment of Soviet power in the region, came to dominate the local government and Party institutions to create a titular ethnic “machine,” and how it was able to make use of the mobilizational resources offered by Soviet nationality policy together with the physical and political advantages offered by its sub-tropical location to negotiate its relationship with the metropol(s) and with larger, competing patronage networks throughout the 1920s and early 1930s. Lakoba and his clients faced a series of trials (both figuratively and literally) over this period—hostile reports, denunciations, investigatory committees, Party tribunals, and ultimately a staged show trial—that tested Lakoba’s ability to maintain his fiefdom.

Could Lakoba have produced the same powerful and enduring patron-client network had he been just head of a district without “titular” nationality status and without a designated autonomous territory? Would he have had the same level of network access to and influence among the Bolshevik leadership? Based primarily on the rich collections of documents from the fondy of the Georgian Party Central Committee, the Transcaucasian Regional Committee (Zakkraikom) of the Communist Party, the Transcaucasian Central Control Commission and Worker-Peasant Inspectorate, the Georgian Party Central Control Commission held in the Georgian Party archives in Tbilisi, and especially the Personal Papers of N.A. Lakoba held in the Hoover Institution, I use the experience of the Lakoba group as a prism through which view the intersection of clientelism and nationality, the tensions between federalism and local sovereignty implicit in the “post-imperial” Soviet federative structure, and the role of personalized power (or lichnyi rezhim) in the early Soviet periphery.