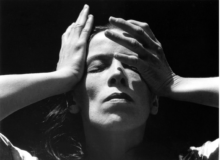 This is Part II of a three-part series. Part I may be found here, and Part III will follow on Thursday, 4/16.

Graham wrote to Barbara Bush, asking if the first lady would become honorary chair of yet another upcoming gala. Graham referenced the company’s “deep [financial] trouble,” and emphasized the importance of the upcoming Soviet performances. Bush would join the likes of Jacqueline Kennedy Onassis, Betty Ford, and Nancy Reagan. In order to fund the diplomatic tour, Graham needed domestic cash.

Presented for Bush in a letter, Graham called the gala program “In the American Grain” and proposed works inspired by the American Southwest, El Penitente and Primitive Mysteries, along with Americana, Frontier and Appalachian Spring. Graham proclaimed that she would add American Document, billed to Bush as a “world premiere,” even though Graham had, in fact, premiered the work in 1938. Ironically, the original subject matter of American Document and its late 1930s newspaper reviews could easily have associated its creator with the Depression-era Communist Party. Graham’s first premiere used the words of Walt Whitman (following Duncan and Shawn), Abraham Lincoln, and the Declaration of Independence to show “proud episodes in American history,” but it was not all celebratory. The four sections of the work knowingly “presented a cycle through shameful – as well as proud – episodes in American history.” In 1938, Graham lamented the fate of Native Americans, racial injustice, and the predicament of impoverished Americans during the Depression. Indeed, when the leftist Daily Worker interviewed Graham in 1938, she said she had constructed the work to engage common people, fighting her reputation on the left as bourgeois.

She used the spoken word in a modern dance, which had been successfully deployed in earlier protest works by Jane Dudley, including Time is Money, set to a poem by a communist writer decrying the oppression of the worker by the “financiers.” The New Dance Group’s Van der Lubbe’s Head, referencing the German communist martyr, had been celebrated by both John Martin in the New York Times and the Workers Dance League, which offered it the Lenin Prize, including a bronze statue of the revolutionary leader. The use of the spoken word to accompany dance achieved aesthetic and political power. Reviewers and judges specifically cited the works’ use of words. Following critical appreciation for the use of spoken language in a protest work, Graham featured known leftist and even Communist dancers for her piece. In the end, however, the work celebrated democracy in its promise, if not its realization: “I refer to such a word as democracy that reminds us of rights we have, but may not avail ourselves of,” she said in the 1930s. Ironically, her Depression-era words signaled her own manufactured history in the Cold War anti-Communist era. “As the line goes in the script of the dance,” she had said to the Daily Worker, “‘We forget too much.’”

With “forgetting” a signal characteristic as the company struggled to survive, Graham billed American Document as a “world premiere” and a “new American ballet … with lines from great American documents: The Emancipation Proclamation, The Declaration of Independence, and American Indian sayings.” Gone were the criticisms of racial injustice with the new narrative of triumph in the post-civil rights era, and of the treatment of Native Americans, now imagined on Graham’s frontier as a blank slate in Appalachian Spring or with her works that celebrated their traditions in a distinctly orientalist manner. In the 1980s, Native Americans spoke, if only through their “sayings.” Workers didn’t need discussion, nor did the left. The legacy of Vietnam, Reaganomics’ cuts in social welfare programs in housing and healthcare, persistent racism, drug addiction, the collapse of the Equal Rights Amendment for women, the AIDS epidemic, and a myriad of international atrocities did not make it on to Graham’s stage.

In a grand Cold War move, Graham cast Baryshnikov as the lead male in the new celebratory ballet that emphasized an escape from tyranny and celebrated democracy with “The Declaration of Independence.” Baryshnikov recalls, “We worked for quite some time on [American Document]. I wasn’t that much interested in the political aspects. She asked me to do things, and I did them. I don’t remember the details. I was interested in dance. She asked me to do it for some fundraising event, and I did it. That was it.” He rehearsed the work, showing her his grand leaps, suspended in the air, but also practiced reciting from celebratory American documents, in English, with a still discernible Russian accent, in anticipation of a star-studded New York showing, branded American by the White House, to support an upcoming tour of the Soviet Union. With Bush on the gala marquee on Broadway, Graham could finance a tour to the Soviet Union and bring Baryshnikov back to the Russian people with a work that showed the promise of America and its frontier freedoms under Graham’s teachings. He discovered the power of stillness as he performed as the Husbandman, as a man dedicated to artistic renewal. In 1938, the narrator had proclaimed the “Americanness” of immigrants in the United States who embraced the ideals of democracy and freedom. Baryshnikov would be happy with the dance’s agenda, having declared, “I am individualist and there [in the USSR] it is a crime.” He told the press that as a boy he “fantasized about freedom.” Graham announced to the press that the American words of Lincoln and the nation’s leaders “last forever,” and that appearance of the Soviet Baryshnikov in the American context “gives new life and animation.”