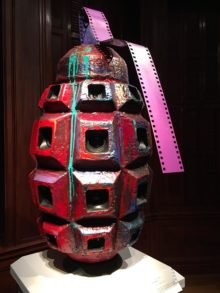 Rachel Angelica Engle is an M.A. student in the Department of Russian and Slavic Studies at NYU. She specializes in Russian and Ukrainian art history and its relation to contemporary politics.

“Russia has its politics, and we have our dead bodies.” With these words, Ukrainian artist-activist Daria Marchenko both candidly summarizes her reaction to the ongoing war in Ukraine, and articulates the inspiration behind “Five Elements of War,” currently on view at The Ukrainian Institute of America. Though the impetus behind Marchenko and co-exhibitor David Green’s protest art is evident, its effects seem confined to the space of the Institute itself — indeed, visitors interested in enacting social change may come away without a clear sense of direction.

The exhibit consists of five politically-charged pieces featuring bold coloring and bullet casings from battlefronts in the Donbass region and Kiev’s Maidan. Each piece incorporates symbolism that bespeaks the consequences of violence in Ukraine.

Upon entering the Institute, visitors encounter the exhibit’s signature piece, entitled “The Face of War.”

This seven-foot piece consists of a portrait of Russian president Vladimir Putin and is composed of five thousand bullet casings collected from the Donbass. The image is illuminated by an overhead light that changes color in approximately 5-second intervals. This shift in light pigment induces an optical illusion that continually alters the portrait’s mood: certain tones cause Putin to appear prideful, while others make him seem cruel or even fearful.

“The Face of War” shares a room with two additional pieces. To its left, “Honor” (pictured above) presents a vision of the human eye. Like “The Face of War,” “Honor” is composed of “found” elements, in this case pages from the Budapest Memorandum and various international military badges. This piece acts as a link between the exhibit visitor and the international community, which looks on as the situation in Ukraine continues to unfold. Across from “Honor” is “The Flesh of War” (pictured below), a reconfigured world map in the shape of two female figures. As in the case of the Putin portrait, the figures here are composed primarily of bullet casings — half of which are pointing towards, and the other half away from the viewer. “Flesh” appears to contemplate the relationship between the oppressors and the oppressed, serving as a commentary on the consequences of male-dominated war upon the female psyche.

In the next room, two pieces entitled “The Brain of War” and “The Heart of War” stand adjacent to one another. The former, a grenade-shaped sculpture, features camera lenses and film negatives. Its structure is a clear statement on the use of propaganda and international media reporting during the war.

Finally, “The Heart of War” features a faceless male figure, constructed of bullet casings, surrounded by images of oil rigs. The intent is, evidently, to play on human biology by depicting a heart that pumps oil rather than blood.

The titular “Five Elements” in Marchenko and Green’s show combine to create an overwhelming sense of immediacy that could potentially contribute to educating the general public and evoking its sympathy for the continued violence in Ukraine. The use of bullet casings as an artistic medium is a risk that ultimately pays off, palpably stimulating viewers’ reaction. This shock value is reinforced by minimal and awkwardly placed labels, which force the spectator’s focus onto the art itself and eschew comprehensive description or explanation. Visitors leave impassioned to act in support of Ukrainian independence efforts, but without a clear action plan. By failing to present a pathway toward community engagement, the exhibitors limit the effectiveness of their protest pieces, ultimately gambling on the possibility of that awareness will amount to action.

Five Elements of War” is open to the public through February 4, 2018 at the The Ukrainian Institute of America in New York City.