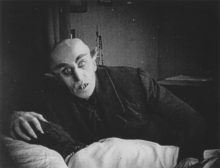 Geoff Cebula holds a PhD. in Slavic Languages and Literatures from Princeton University and is author of the academic horror novel Adjunct (available for purchase at Amazon). The following blog post derives partially from his research, but even more from watching horror movies with his dog. It is an attempt to illustrate the principle tenets of the theory of horror advanced by Leonid Lipavsky, a Russian philosopher associated with the OBERIU poets (Daniil Kharms, Alexander Vvedensky, others), through an exploration of horror movies.

[Note: This is Part II of a two-part post. Part I may be found here.]

What do you get when you combine the nineteenth-century Russian author Aleksei Tolstoy, the Italian Gothic horror/giallo director Mario Bava, and English genre icon Boris Karloff? Happily this question isn’t hypothetical but describes the (then) living and dead collaborators who brought about the middle segment of the 1963 horror anthology I tre volti della paura, also distributed (in altered form) as Black Sabbath.

This segment is based on Tolstoy’s “The Family of the Vourdalak,” a Gothic short story set in a Serbian village. The tensest moment in the story happens near the beginning, when the patriarch Gorcha returns from hunting a Turkish outlaw in the mountains. Before departing, he had told his family to kill him if ten days should elapse before his return, for in that case he would be returning as a vourdalak (in the French spelling of the original), a vampire who targets its most intimate friends and relations, often converting entire villages in this fashion. He had left at eight at night ten days prior, and now his figure appears at precisely the same time on the last day of the term—just after the first monastery bell has sounded the hour. The family gather around him, desperate to ascertain whether he is still himself or…

For Lipavsky, the world exists in a hazily defined, permanently changing state, where contours always shift, new forms continually emerge, old ones disappear, and living things are just a temporary balance achieved among a multiplicity of more-or-less coordinated biological processes. Everywhere in this world, we encounter “impersonal, elemental life,” always striving to grow, change, overflow boundaries. Horror is the recognition that boundaries are permeable, all life is conditional, and any individual living being is an exception rather than the rule.

This sense of one’s own insignificance is akin to the sublime. There is a kind of ecstasy in it: “No one has ever lived for himself, nor for others. Everyone has lived for one thing: to shiver.” But it’s also a kind of sickness, disorientation, a dizziness. (Lipavsky devotes the last part of the “Investigation” to dizziness, which he interprets as “objects losing their stability, the sensation of their instability or spilling-out.”) It also always involves loathing. Because we cannot remain the exception forever. The teeming impersonality of “elemental life” is the rule of the organic world—as Lipavsky puts it, “an individual rhythm is always false.”

Confronting our own falseness is “almost as if we were talking with a friend we love affectionately, as if we were reminiscing about the things that were closest and most important to us, and suddenly, another face shows through his features […]” Not only is our beloved friend, in fact, someone else, but Lipavsky introduces this other as “alien, cunning, fierce as a primate”—indeed, someone divided by an unbridgeable chasm, as he “doesn’t even understand words” and is “composed totally unlike us.” We have tried to pour ourselves and our experiences out to a like mind, but we were betrayed. The life we thought we recognized was actually little like our own: “He’s not himself, but a shapeshifter.—

“And every fear is the fear of a shapeshifter.”

So strangely, even the vourdalak turns out to be another version of a familiar horror. When Gorcha (Karloff) returns home with haggard, yellowish mien, his family scrutinize the father’s face to ascertain whether the obvious wear is the result of ten days in the mountains or this face thinly conceals “another life,” an infectious force animating this body in its inexorable desire to spread. If they guess wrong, they will either commit patricide or will perish; either way, the second face that they suspect behind their father’s features will become their own—they will become monsters.

This moment of uncertainty—the seemingly paranoid searching of the familiar for a hidden threat—bridges the vampire tale with the realm of psychological horror, with its pervasive mirrors, uncanny doubles, and dissociative episodes. Such devices play on a set of suspicions built into the very nature of fear: At some level, we are not ourselves. Our friends are not our friends. The beloved face before us can, in a flash, turn hostile and insensate. The body-snatching alien, the charismatic serial killer, the beloved black widow, the possessed child, the cult your neighbors secretly belong to—are all forms of the shapeshifter.

Lipavsky insists that every fear—be it of the dead, of aliens, of monsters, of “madness”—is really a single Fear. Behind every face of horror, we find an encounter with “elemental life.” Consequently, horror is always an encounter with our own falseness, the impossibility that our organized body and organizing mind could impose any kind of lasting order on the unconcentrated, striving, fluid movements of this teeming life. As if it would just take a strong tug on a thread to unravel the illusion of a human life as an individualized, self-sufficient entity, revealing some other, alien entity inside—or perhaps a multitude.

Does this constitute a unified theory of the horror genre? Probably not. As genre fans acknowledge, the world of horror movies is vast, contradictory, and often has very little to do with what actually provokes fear. Even among quite frightening films in the more clearly established genres, there are instances that fail to fit his framework. For instance [Mild Spoiler], I’m not sure how Lipavsky would account for killers such as the assassin in the very effective 2016 slasher Hush, who actually removes his mask fairly early in the going and is primarily terrifying for his athleticism and resemblance to a “regular guy.” Classifying this killer as a “shapeshifter” seems a stretch (since he never attempts to garner trust), and the heart-in-throat terror of running from such a danger points to a class of fear that Lipavsky excludes from his definition of “horror” (as well as a vicarious version that we might call “thrill” or “suspense”).

Yet, I do believe Lipavsky’s theory does apply to a surprising range of deeply unnerving moments in the genre. And it at least seems plausible to me that the most terrifying thing, in itself even more horrific than death, is the pervasive, subcutaneous existence of “another life.” I also think that Lipavsky is very perceptive in suggesting that we tend to recognize this “other life” by how it moves—primarily, by a convulsive, quivering motion instead of our own (generally) concentrated, goal-oriented movements. But the part that always gets me is the line about the “shapeshifter.” There’s something about the experience of horror that always feels very close, so the image of a friend’s second face is strangely fitting.

Of course, it is hard to claim any certainty in this matter. As a rule, true horror doesn’t strike out in the open, but finds the dark.