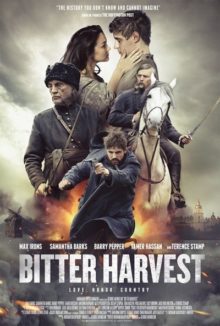 Kathryn David is a doctoral student in the History Department at New York University.

The Canadian film Bitter Harvest (written and directed by Ukrainian-Canadian George Mendeluk) takes as it subject the Ukrainian famine of 1932-1933, known as the Holodomor. The Holodomor (meaning death by hunger) was a man-made famine, orchestrated by Soviet authorities, that intentionally created food shortages in rural Ukraine that led to the starvation of millions of local peasants. While well-known to historians of Ukraine and the Soviet Union, as well as among Ukrainians and the Ukrainian diaspora, the holodomor remains unfamiliar to those outside these circles, despite the fact that United States government declared it a genocide in the 1980s. Compared to other episodes of mass murder in the 20th century, the Holodomor is not even the most prominent among Soviet episodes state-sponsored violence, discussed much less frequently than the 1937 purges.

This context is significant when watching Bitter Harvest and the landscape it must confront as a historical drama. The filmmakers assume the audience have never heard of the Holodomor and are unfamiliar with the basics of Soviet and Ukrainian history, leading to almost comical moments of exposition. Yet, this assumption has unfortunately been proven accurate by reviews of Bitter Harvest, including one in the Washington Post in which the writer casts doubt on whether the holodmor actually happened. In many ways, at a moment when Ukraine’s history is being questioned, mobilized, and whitewashed by both the Russian and Ukrainian governments, film and literature are more important than ever to convey the nuances and emotional resonances of the tragic events of the region. This film, however, is not the work of art that will do that.

In Bitter Harvest, The events of the holodomor are told through the story of childhood sweethearts Yuri (Max Irons) and Natalka (Samantha Barks) who live in a former Cossack village in Ukraine. Yuri comes from a long line of Cossack warriors, but is more interested in art than fighting. Natalka has no personality traits or interests except for Yuri, helping out on the family farm, and making borshcht—though we see her have incredible strength and perseverance later in the film. In many ways, intentionally or not, Yuri and Natalka bear a striking resemblance to Vasily Grossman’s, Vasily and Hanna, the loving peasant couple Grossman describes in Everything Flows who eventually starve to death in the holodomor. Both in Grossman’s portrayal and in Mendeluk’s, Ukrainian peasants fit the stereotypes and tropes created for them by imperial (and later Soviet) ethnographers. While Grossman’s account of the Holodomor eventually moves beyond the story of Vasily and Hanna to scenes of horrific violence and the complicity of local Soviet authorities in that violence, Mendeluk’s film does not. Yuri and Natalka’s village and the people who populate it could very well have been from the 17th century instead of the 20th. Yuri’s father, wearing a vyshyvanka (traditional Ukrainian embroidered shirt) and a Cossack haircut tells him how the tsar (and before him the Tatars) took away their freedom but that they soon would get it back. Despite the village’s isolation, however, the villagers know a lot about current events and in 1917 are not only aware of who the Bolsheviks were but what their plans were for Ukraine long before the Bolshevik authorities arrive in town.

Despite the town’s suspicion and fear of Bolshevik and later “Soviet” power, Yuri and his friend Mykola are intrigued by the idea of moving to Kyiv and taking part in new opportunities for Ukrainian culture made possible by the new Soviet regime. In Kyiv, Mykola is elected leader of the Ukrainian Communist Party  a mere few months after arriving from the village and Yuri attends art school. They become quickly disillusioned, however, after witnessing the violence of collectivization and the assault on the Soviet-Ukrainian intelligentsia. This disillusionment eventually leads Mykola to commit suicide, a reference to the fate of Ukrainian communist Mykola Skrypnyk. Yuri is arrested and remains in prison as the Holodomor begins. The famine in the countryside is thus experienced at first only by Natalka who witnesses her neighbors starve and those who attempt to negotiate with the Soviet authorities brutally murdered. At one point, Natalka tries to seduce and murder the local commissar with poisonous mushrooms but instead the mushrooms have a psychedelic effect and the commissar goes on a bizarre acid-like trip that would have been quite funny if it weren’t for his attempted rape of Natalka during the trip. While at the commissar’s Natalka finds out more about the famine and decides to lead a resistance. Eventually, Yuri is able to escape from Soviet prison and join her.

Stalin and Lazar Kaganovich also show up, making plans for Ukraine far away in Moscow. Stalin is portrayed as having a grudge against the Ukrainians (in fact, in the middle of a party he inexplicably shouts “Damn those Ukrainians!”), in part based on their resistance to collectivization in the 1920s and in part because of irrational prejudice. Despite historical documentation of Kaganovich’s own role in orchestrating the Holodomor, in the film he is portrayed as being forced into carrying out the famine by Stalin.

Throughout the film, there is an uneasy tendency to conflate “Sovietness” and “Russian-ness.” The film is in English and though we never hear Ukrainian spoken (save for folk songs that serve as the soundtrack) we hear Russian often- never subtitled and always being shouted by Soviet officers to Ukrainian peasants. The Ukrainian characters are played by British actors with British accents while some of the Soviet characters are played by actors using a Russian accent.

While many of the plot points are historically accurate, they are told with so little nuance and so little subtlety they seem to bear no resemblance to the true (and truly tragic) events of the early 1930s in Soviet Ukraine. The story and its characters are painted with such broad strokes, many of which derive from stereotypes and clichés, the true brutality and cruelty of the Holodomor and Soviet purges is lost. When every villain is comically cruel and every victim an innocent, child-like saint, the reality of what actually happened in Soviet Ukraine and the complicated individuals caught up in it is tragically forgotten.