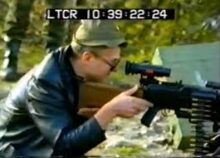 Imagine an obituary for O.J. Simpson which talks about his acting career and his role in a series of famous TV commercials, but leaves out the fact that he played football.  Oh, and that pesky murder trial.

That’s basically what the New York Times did in its obituary for Eduard Limonov.

Seventy-seven years old at the time of his death, Limonov had long been destined for NYT obituary fame.  Not only had he been a leading figure in the Russian opposition since before Putin was a twinkle in Boris Yeltsin’s eye, he was also the author of dozens of books, from novels to poetry collections to essays and political polemics.  Several of them have even been translated into English.

In 2011, the French writer Emmanuel Carrere, who made a name for himself by working on the boundaries of fact and fiction (such as I Am Alive and You Are Dead, his biographical novel about Philip K. Dick), gave Limonov the fictionalized biography treatment in 2011.  That, too, has been translated into English.

Limonov has been the subject of numerous profiles in newspapers, magazines, books, and websites; Keith Gessen’s 2003 Slate essay “Monumental Foolishness” has been making the rounds since Limonov’s death was announced.

So one need not have profound expertise in things Russian to know that the two things for which Limonov is most famous (or notorious) are the two things absent from the Times obituary: the gay sex scene in his first and most significant novel, and a public alliance with the forces of Bosnian Serb war criminal Radovan Karadzic, memorialized in a photo of Limonov firing a machine gun at Sarajevo from the top of a hill.

No one needed me, no one had even touched a hand to me in over two months, and there he was, stroking me and saying, “My baby, my baby!” I nearly cried. —It’s Me, Eddie

Prolific as Limonov was, chances are good that only his first and most famous novel will survive him for long.  It’s Me, Eddie, published in New York in 1979 and translated into English in 1983, circulated as tamizdat throughout the USSR until finally being published there in 1990. Along the way it also appeared in German under the evocative and apt English title Fuck off, Amerika.

It’s Me, Eddie is a masterpiece of negativity and self-fashioning, not to mention a breath of fresh air in an almost uniformly ultraconservative Russian emigration.  Telling the story of Limonov’s own miserable life since emigrating from the USSR in 1974, Eddie presents the reader with a first-person protagonist who blames his host country for his deep disillusionment with the capitalist world that he believes seduced him into exile.

Losing his wife, his calling as a poet, and any sense of purpose in the world, Eddie turns New York into his own personal punk playground, joining Trotskyites, hanging out with lowlifes, and, most important, having sex with a homeless black man named Chris.

Whether or not his encounter with Chris is the first explicit gay sex scene in Russian literature, it’s certainly the first one to get famous.  In typical Limonov fashion, the author manages to portray it as simultaneously the depths of his humiliation (sex on the street with (gasp) a black man, and as a bottom, no less!) and a moment of true tenderness.  Eddie worships Chris’s body, enjoys every moment, and declares undying fidelity (which lasts only a few pages, of course).

In 2020, it is difficult to imagine what a scandal this was.  Or perhaps in the days of the “gay propaganda” laws, maybe not so difficult at all.  I first heard of the novel when I was an exchange student in Leningrad, and one of my Russian friends brought it up.  He said it was disgusting, perhaps the filthiest thing he has ever read: “How can anyone write about such things?”

Since then, he’s emigrated to the States, and I hear that he and his husband are quite happy together. I had interpreted his words as prudish, and now it looks like they were Aesopian.  Eddie’s homosexual encounter had broadened the possibilities of Russian gay discourse simply by allowing the existence of gay sex to be discussed in the negative.

Now that I look back on it, I was probably being sent a signal that I was utterly incapable of receiving.  But even my failure to catch his meaning was, for him, information.  Like so much of my occasionally mystifying experience in the Soviet Union, this was communication, even if it seemed to be happening without me.

It’s Me, Eddie has a lot more going for it than just a few pages of interracial homosexual sex in a back alley.  It establishes Limonov’s give for self-mythologizing, his capacity for turning hostility into artistry, and his lifelong role as an iconoclast.  It also has one of my favorite last lines in all of literature.  From his balcony, Eddie looks out at the great city that refuses to reciprocate his admiration. Wiping the tears from his eyes, he is not even sure whom he addressing—it might even be the buildings themselves:

Who but Limonov would couch such profane bravado in a whisper?

Reading Limonov’s early work, it’s easy to see the political extremism as just another pose.  And it’s possible that it even started out that way.  But by the time civil war broke out in Yugoslavia, and Limonov had already returned to Russia, the writer had wholeheartedly embraced pan-Slavic brotherhood and straightforward fascism.

Now Limonov, who would be arrested repeatedly during the Putin years, proved to be ahead of the political curve.  Russian state television, in a preview of its role in Putin’s third and fourth terms, was presenting a narrow and nationalistic view of the admittedly complicated Yugoslav wars, with Serbs as the innocent victims of Muslim fanatics and Croatian crypto-fascists.  The logic behind all of this was clear to anyone who ever prepared for the analogy section of the old SAT:  Serbia is to Yugoslavia as Russia is the Soviet Union;  Serbia is to Kosovo as Russia is to Chechnia.

Limonov being Limonov, he took this logic to its extreme, basking in the adoration of Karadzic’s genocidal forces while asserting himself as a macho man of letters.  He was trying to be Hemingway, Nikolai Gumilev, and (most evocatively, given the encounter with Chris) Arthur Rimbaud.  Too bad he was also following in the footsteps of Ezra Pound.

I’ll always love It’s Me, Eddie, and I’ll never forget Limonov’s years as a columnist for the gonzo expat rag The eXile, which published his essays in their original, unedited English (imagine a Trump supporter who sounds like Borat).

But Limonov’s legacy is complicated. In many ways, it’s downright horrible.  One can draw a straight line from his feckless fascist adventuring in Bosnia to the right-wing nationalist LARPing of former war hobbyists and trashy military science fiction writers in Donbas.  Would there be a writer like Zakhar Prilepin, bragging about his battalion killing more Ukrainians than any other, if it were not for Limonov?

Limonov has a lot to answer for, but he is not alone. The New York Times didn’t just bury the facts.  They buried the lede.