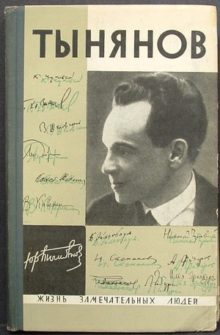 Helen Stuhr-Rommereim is a PhD student in Comparative Literature at the University of Pennsylvania, studying nineteenth-century literature and the history of Russian literary theory.

[Note: This is Part I of a two-part post. Part II will appear tomorrow.]

In a recent New Yorker post on the singer-songwriter Maggie Rogers, writer Amanda Petrusich sketched out the topography of contemporary music culture: “All our musical planes are lateral; all our inspiration is ambient.” Commentators frequently identify the maximal availability of all things from all times as singularly characteristic of the present. Yet Petrusich’s description was particularly spatial, evoking a broader system of influence and indexicality. In this connection, one cannot help but recall the theoretical systematization of literary change over time in the work the Russian formalist critic Yuri Tynianov.

At the end of a year that has seen much scholarly attention turned toward the legacy of the Russian Revolution, it is natural to think of the Soviet avant-garde’s theoretical wing. Today’s means of communication seem infinitely more powerful than any one of their intended functions, and the formalists were nothing if not attentive to the way means shaped ends. Their methods, though built for a different world than ours, delineate functions that still appear in the effects of the infinite and uncontrolled evolution of our digital environment on what is communicated and how — and, in turn, how we experience the world.

Taking our cues from Petrusich’s review, we might observe that formalist criticism frequently considers all planes laterally. This means that  cultural analysis takes place on the synchronic level, and all inspiration is to some extent ambient — in the sense that phenomena like “genius” appear almost accidental, a creator meeting a cultural-historical moment and the set of relations that constitute literature at that time. “Lateral planes” and “ambient inspiration” suggest a particular set of relations among artworks, styles and artists from various time periods and genres. How synchronic sets of relations change was precisely what Tynianov sought to theorize — in the form of a system, stipulating laws governing the evolution of genres, forms and realia in and out of “literariness,” marked by the defamiliarizing function famously theorized by Viktor Shklovsky.

Tynianov’s contribution was to assert that this function is only operative in a particular, historically contingent system, and then to try to establish a set of regulative understandings around the change of this function over time. But the material existence of media today differs so fundamentally from its early twentieth-century counterpart that we may struggle to imagine a contemporary application for Tynianov’s more historical and systemic analysis. These days, questions about how textual works evolve in relation to the social world are more likely to fall within the purview of media theorists than scholars of literature, and to be answered via analyses of platforms, software and networked circulation, rather than of texts. Yet literature, too, has fallen under the influence of the same technological changes that have created new economies of distribution and access for all types of art.

Still, Russian formalism may not seem like the place to turn to get a grasp on contemporary culture. My colleagues studying various national literary traditions are primarily familiar with “formalist theory” as something that may or may not still make its way on to our exam lists, vaguely associated with Russian and American twentieth-century literary scholarship prior to its deconstruction. But given that those of us studying literature still ask what, exactly, can be classified as such, the analytical methods of formalism provide some insight.

In the field of Russian literary studies, there has been a recent move towards reviving turn of the century Russian literary theoretical approaches – specifically that of Tynianov’s formalist predecessor Alexander Veselovsky, whose “historical poetics” approach is currently experiencing something of a renaissance. The idea that a way forward for literary studies might be found in the theoretical approaches developed before the field came into existence is intriguing. In the foreword to the collected volume Persistent Forms: Explorations in Historical Poetics (2016), Eric Hayot poses a big question, which he suggests the book begins to answer: “Is large-scale literary historical criticism possible again today?” Answering this question requires some relatively stable concept of what constitutes literature in 2017. It therefore makes sense to begin by going back to the theories that first claimed literature as a distinct phenomenon warranting its own, independent scholarly apparatus – despite the fact that such theories have repeatedly been declared “dead” in recent years.