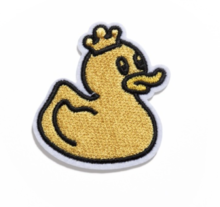 Dr. Alexandra Birch is a professional violinist as well as a scholar of music and mass atrocity in the former USSR. She is currently pursuing a PhD in musicology at the University of California, Santa Barbara, where she works with recovered music from the Soviet Gulag.

In January 2021, Russian anti-corruption activist Aleksei Navalny returned to Russia with his wife after years of personal and political attacks. Navalny’s subsequent arrest and detention provoked international protests, including responses that foregrounded symbols of his campaign and modern Russian dissidence. These visual symbols connect to a long history of protest in Russia, raising questions about the nature of dissidence itself.

E-democracy has played a substantial role in the dissemination of information as well as in the organization of new political movements in Russia. Symbols appear across platforms, becoming significant rallying points for youth and signifiers of the movement writ large. No longer restricted to Russia itself, anti-corruption and pro-democracy posts supporting Russian political protests originate across the world.

Musical groups with strong social media followings — like Pussy Riot or IC3PEAK — further promote pro-democracy energy through both visual and musical symbolism. During the protests of 2021, groups organized internationally to support Navalny made social media posts featuring lights against backlit figures in cities across the globe. Hashtags and other features of new media help interconnect ideas more rapidly than ever, but visual symbology enables a consistency of messaging that unifies the movement and creates personalized connectivity to ideals rather than a disparate collection of many hundreds of posts.

Visual or artistic symbology has always been a rallying point for political action within Russian history, but the greater legibility of images as opposed to texts has also helped link Russian dissidence to more global protest traditions. The current symbols used of the Navalny campaign recall the “Aesopian language”  — or euphemistic, cryptic statements on the government and social condition— that dissidents have long used to express themselves in repressive political settings. Visual symbols have also played a practical role in helping keep supporters of movements more hidden, which is important given the danger of attracting the attention of the FSB.

The word “dissidence” does not capture the nuance of dissent in the Russian setting. Better terms include anthropologist Aleksei Yurchak’s idea of “living vnye,” which describes the process by which late-socialist subjects disengaged from an increasingly alien and decayed Soviet project — without necessarily resorting to outright protest or dissidence. Another useful framing derives from the philosophy of Mikhail Bakhtin, who defined “vnyenakhodimost’” or “outside-ness” as an aesthetic position that provides the artistic leeway necessary to create fictional heroes without introducing elements of the author’s own subjectivity. At their most essential, these concepts of “vnye” point to a struggle between collective and individual identity, opening a kind of loophole through which the individual living under political duress can acquire greater agency.

Some symbols the Navalny movement has mobilized epitomize precisely this sense of “otherness”  and “outsideness.” For example, Navalny’s website at one time sold patches featuring the image of folkloric evil wizard Kashchei bessmertnyi, shown bearing a briefcase emblazoned with the symbol of the Tsar Duck.

Kashchei is a well-known mythological figure in Russian culture, appearing in contexts as varied as children’s stories and Stravinsky’s The Firebird. Using such a recognizable symbol inscribes Navalny in a folkloric tradition while ironically recasting Kashchei’s immortality as eternal corruption.

Other symbols similarly put a contemporary twist on folkloric motifs. The Tsar Duck points to the government’s futility by using a children’s bath toy as a stand-in for Putin, while the Octopus Duck represents the “harmless” façade of corruption with a mutant monster hiding beneath.

Birch bark belts and stickers allude to the beauty of Russia’s natural resources, while simultaneously depicting any number of names or texts in a minimalist block font. The birch bark motif provides a way to support the movement subtly or even covertly by donning monochrome fashion statement pieces.

Many other symbols of support for Navalny are more explicit — sweaters reading “Enough,” t-shirts that openly call for his release, pins with a large N, and items that say “Beautiful Russia of the Future” like the political party itself. These types of items not only support the present campaign, but legitimate Navalny’s ambitions by embedding them into the past, equating the leader’s anti-corruption campaigns to a much longer struggle for Russian democracy.

Anti-corruption efforts in Russia, including Navalny’s, are not only political struggles but also avenues into larger social issues in which Navalny has become a rallying point for millions. Anti-corruption is just one issue within his platform, which also includes migrant rights, detention and police brutality, violent suppression of political opposition, domestic violence and women’s rights, poverty, and historical, unresolved grievances including lingering radioactivity and environmental racism, the murder and oppression of indigenous communities, and the crimes of the Gulag.

The Navalny movement’s political symbology holds power beyond any singular instance of dissent. The multivalent nature of these symbols makes them easy to adopt internationally and apply to issues beyond the anti-corruption activism for which Navalny first became known. They are thus a savvy means to elevate Navalny while expanding public consciousness to encompass not only the kleptocracy of the Putin regime, but the many complicated social issues modern Russia faces.