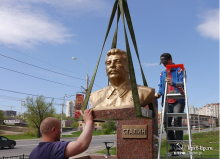 The Orthodox Church and Stalin are having a moment. A few weeks ago, an image went viral on Twitter of a Russian Orthodox priest kissing the feet of a newly erected statue of Stalin in Lipetsk, a Russian city about 300 miles from Moscow. In response to the photo, blogger Nina Ivanova tweeted “The Russian elite understand perfectly well. Stalin is the father of the modern Orthodox Church.”

On November 4th, Patriarch Kirill made a speech at the opening of 14th annual exhibition-forum “Orthodox Russia, My History, 20th Century, 1914-1945: From the Great Shocks to the Great Victory” (we’ll unpack that title later…) where he urged people to focus on the “positive things” done by the Soviet regime, not just the negatives.

The Riga-based news outlet Meduza reported that Patriarch Kirill urged Russians to acknowledge the successes of the Stalinist regime as “impossible to doubt, even if this leadership is marked by evil deeds.”

Analysts have thus far focused on Putin’s ideas about Soviet history (especially WWII) and have speculated as to how he will commemorate the upcoming 100th anniversary of 1917. Putin’s 2005 statements about the break-up of the Soviet Union as “[one of ] the greatest geopolitical catastrophe[s] of the century” are often cited when trying to decipher Putin’s ideas about his country’s past.

However, Putin’s views of Soviet history seem much more logical than Patriarch Kirill’s. Putin worked for the KGB and owes much of his career to his in-depth understanding of Soviet politics. Putin’s views about the loss of the Soviet empire most likely reflect the views of the majority of the Russians he governs.

The Orthodox Church, however, ought to have a more negative view of the Soviet Union than a former KGB agent— or should they? As the Meduza piece points out, the founding of the Soviet Union led to attacks against the Church, including the jailing and execution of some of its members, the expropriation of Church property, and a campaign of denouncing Russian Orthodoxy as a main factor in Russia’s “Great power chauvinism.” Historians of the Soviet Union will quickly point out, however, that these policies changed during the Soviet mobilization for WWII, a process typically explained by the population’s need for “religion” in such trying times.

This may be true, but viewing Stalin’s use of the Church as a pragmatic concession obscures the fact that Stalin’s relationship with the Church was an important component of the Russification of Soviet-ness. In the late 1930s and during WWII especially Russians were transformed from a nationality suffering from great power chauvinism to one that was selected as the chosen group to lead the other, lesser nationalities. This process certainly reflects ideas that governed the Russian Empire, but in the Soviet case the Church plays an even more special role. The special treatment of the Russian Orthodox Church under the nominally atheist Soviet Union tied Orthodoxy and the Soviet Russian-ness that privileged one group to rule over another together in an unprecedented way. For example, one of the first tasks of the Soviet Union in asserting control over new Molotov-Ribbentrop territories was allowing the Central Committee of the Ukrainian Soviet Socialist Republic to preside over mass conversions of Ukrainian Greek Catholics to Russian Orthodoxy. Making Soviets in Western Ukraine meant making Orthodox believers.

While Soviet control over the Orthodox Church may be seen as form of religious repression, it also meant that the Church was still allowed to exist and have a privileged relationship to the Soviet state- unlike other religious sects deemed “foreign” or instruments of espionage. The “My” in the title of the exhibition Kirill spoke at allows Soviet history to be claimed by the Orthodox. Russian history, Soviet history included, is Orthodox history.

Kirill’s remarks demonstrate his awareness that the close relationship between his Church and Putin and their shared vision for the “Russkii Mir” is in part thanks to Stalin.