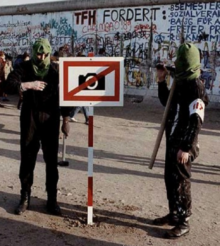 Briana Smith, Assistant Director of Studies in History & Literature at Harvard University, will publish her first book on art and urban politics in Berlin with MIT Press this fall.

On 30 May 1989, a black pictogram of a camera framed in red with a diagonal red slash appeared on two major landmarks in East Berlin’s central Alexanderplatz. The message was unmistakable: no photography allowed. Some ran home to grab cameras and returned to defy the order. Another man quickly hid his camera, and a West German tourist exclaimed “typical East,” assuming the ruling Socialist Unity Party (SED) was behind the regulation. But this was no act of state. In fact, Photography Forbidden was an art action from East German artist and conceptual photographer Kurt Buchwald. During the action, Buchwald captured responses to the signs with photographs of his own. This caught 2the attention of a nearby police officer, who pointed to the signs and informed Buchwald he must stop. Buchwald ignored the warning, and the officer arrested him. The arresting officer soon learned the signs were connected to a city-approved experimental art festival. Buchwald was free to go.

The legality of Buchwald’s art action was a recent development in the German Democratic Republic (GDR), which had just ended its official ban on performance and action art in late 1988. The change brought the greater visibility of experimental art practices to socialist public spaces. Yet such art was by no means new to East Berlin. A range of experimental practices had appeared across the city—in private art spaces, state-sponsored galleries, and on city streets—since the mid-1970s. Thus, Buchwald’s staging of Photography Forbidden in Alexanderplatz in 1989 marked the culmination of a much longer cultural transformation taking place in the GDR capital: a grassroots glasnost.

In the mid-1980s, Soviet Premiere Mikhail Gorbachev began his reform program of glasnost and perestroika. The reforms prompted greater openness and transparency across Soviet society and the restructuring of the planned economy. Thanks to glasnost, restrictions on artistic expression dissolved and previously banned art, literature, and films were rehabilitated. An impulse to improve society at all levels also accompanied these reforms. The response to Gorbachev among other Eastern Bloc countries was mixed. Poland and Hungary were emboldened to pursue their own reforms. Czechoslovakia and Bulgaria adopted a cautious middle ground. The GDR, however, stubbornly resisted change. This rigid stance garnered a warning from Gorbachev and frustrated many East Germans who anticipated a “fresh wind” to blow westward. Instead, alternative models for organizing culture and society were percolating into the GDR from the bottom up.

One early contributor to grassroots glasnost in the GDR was Manfred Butzmann. In 1976, the ruling party’s forced exile of singer-songwriter Wolf Biermann inspired Butzmann to create his first photomontage posters. For Butzmann, the posters were a call to collective action that asserted the citizens’ ability to shape socialist society. Butzmann’s first poster from 1977 called out to viewers: “Citizens, Care for Your Stoops!” Underneath the text, Butzmann arranged twenty-eight images featuring sidewalks filled with trash, heaps of unused building materials, and broken handrails. The images came from Park Straße in the Pankow district, where Butzmann’s studio and family home were located. His next poster, A Place for Trees, displayed areas along the street where trees once grew, and could potentially grow again, if residents took action.

Butzmann also practiced what he preached. He planted trees and climbing ivy to bring nature back to the bare utility boxes and lamp posts around his neighborhood. He documented these actions with posters featuring the simple text: “for example.” Through his posters and actions, Butzmann reinforced the citizens’ ability to alter their surroundings and address the unsatisfactory state of their streets. Though the sites of change were hyper-localized, these actions challenged the SED’s control over political life. Instead, Butzmann modelled a form of socialist citizenship open to independent initiative and grassroots engagement.

Small neighborhood galleries also offered a dynamic public space for contemplating alternatives. Artist Reinhard Zabka’s 1982 solo exhibition, Daydreams, immersed visitors of all ages in the artist’s eccentric style. He filled the gallery with patchwork tents and quilts of vibrant colors, two divans covered with handmade quilts, found object sculptures, photo collages, and painted-over photography. During the exhibition, Zabka continued to work directly in the gallery and art-making tools and supplies were displayed. This underscored the potential for all to take part in the creative process. The exhibition also invited visitors to experience the gallery as more than an exhibition space, rather a space for critical thinking, community and collective creativity.

East Berlin artists were also venturing out of doors. In 1985, artist Karla Sachse was granted permission to host a “dedication” for a mural on a nearby fence. Sachse’s 138-meter-long mural depicted happy bathers at the seaside and children digging in the sand. Bringing the beach to life, Sachse’s “dedication” transformed a high-traffic boulevard along the mural into a one-hour beach party. At the designated time, Sachse’s friends and their children appeared in bathing suits with plastic buckets and shovels. When the police intervened, Sachse presented her permit and was allowed to continue. Sachse’s action re-claimed urban space for an unscripted, absurd, and joyful purpose quite different from carefully choreographed state socialist rituals. It also signaled to others the untapped creative potential of urban space.

Grassroots glasnost achieved critical mass in June 1989 during the month-long Permanent Art Conference. Hosted at the White Elephant Gallery (Galerie Weißer Elefant) in East Berlin, the series featured art that was shocking, sardonic, and brutally candid in its critiques of the SED. During the inaugural event, Kurt Buchwald’s Photography Forbidden in Alexanderplatz tested the party’s authority over urban space. Reinhard Zabka and Karla Sachse constructed installations within the gallery mocking the party’s empty promises and propaganda.

A series of performances from the Auto-Perforation Artists collective connected with festival audiences on a more visceral and affective register. During her performance on 17 June 1989, Auto-Perforation Artist Else Gabriel shocked the senses—and psyches—of viewers packing the room and gathered outside. Gabriel dunked her head into a bucket of pig’s blood, ground meat, and melted gummi bears. She then groped her way to a nearby glass vitrine covered with bread dough. Tearing away the dough, Gabriel unleashed a swarm of flies. The flies began to buzz around her blood-soaked head and the blood splattered across the floor. Audience members, stunned, sat on the floor just inches from Gabriel and the blood bucket. As the gallery’s co-director Ralf Bartholomäus watched the blood drip down Gabriel’s neck he found the experience “disturbing and yet so freeing at the same time.” He left the performance with the sense that anything was possible. And yet the Wall’s opening just a few months later was beyond the “anything” Bartholomäus imagined that evening.