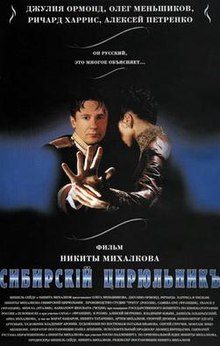 This is the first entry of Russia’s Alien Nations: The Secret Identities of Post-Socialism, an ongoing feature on All the Russias.  It can also be found at russiasaliennations.org

“What does it feel like […] to end up in what’s essentially another country?”

“It feels as if there are new complications.”

“He’s Russian. That Explains a Lot”

On October 30, 1998, just two months after the Russian Federation’s economy went into a tailspin, director Nikita Mikhalkov released The Barber of Siberia, an overambitious failure that was the cinematic equivalent of the ruble’s collapse.  Not that its viewers at the star-studded Kremlin premiere were unimpressed by what was then the most expensive film in the country’s history.  By most accounts, Russian audiences loved the film; indeed, from what I could tell from my own, somewhat less glamorous screening in downtown Moscow, my (American) wife and I were the only ones in the theater stifling groans rather than bursting with laughter.

The film’s release followed an intensive advertising campaign, from billboards to television spots to a limited edition eau-de-cologne (“Cadet”) (“Юнкерский”)—Mikhalkov wanted it to combine the “smell of a shaven cheek, saddle leather, a recently-downed shot of vodka, and the first drag on a papirosa”).  The story of the late-nineteenth-century doomed love affair between a Russian military cadet with the unlikely name of Andrei Tolstoy (Oleg Menshikov) and an American woman (Julia Ormond) representing the interests of a rapacious American inventor (his “Barber of Siberia” is a machine that will chop down Russia’s precious woods with inhuman efficiency), Mikhalkov’s film had the ambition to match its imperial setting.  Not content with winning an Oscar for best foreign picture in 1995 for his Burnt by the Sun, Mikhalkov apparently wanted to nab the great white whale of American cinematic acclaim: best picture, full stop.

Hence the odd contrivance that nearly everyone the Americans encounter in 1885 speaks English, and the resulting 70% of the dialogue spoken in what for the Russian audience was a foreign language. Whatever Oscar hopes he had for this tactic, it could have been seen as in insult to Russian audiences, who experienced the film the way they always do when the movie is foreign rather than domestic: with a single voice talking over the foreign dialogue in Russian.  Granted, this overdubbing was by Mikhalkov himself, an accomplished actor with a soothing and mellifluous voice. But this only reinforces the director’s maniacal control of the finished product.

The Barber of Siberia was a curious intervention in the debate over Russia’s past, its future, and, most important, its identity.  Authored by a man so thoroughly identified with his own fantasies of Orthodox, monarchic traditionalism that he cast himself in the role of Tsar Alexander III, the film unsuccessfully negotiated the geopolitics of global cinema.  Everything about Barber itself was designed to portray a positive image of Russia and Russians:  the cadet core is filled with honest, earnest young men, the Tsar himself is good, the nobility and common people even better, while the greatest threat to the country is an overreaching, blundering America that wants to turn the country’s natural resources and natural beauty into fodder for a global capitalist mill.  The film tries to pander to everyone:  flattering to Russian viewers, it nonetheless revels in stereotypes about the Russian soul that verge on minstrelsy, most notoriously, the Maslenitsa (pre-Lenten festival) scene, when a Russian officer starts drinking only to go on an epic spree.  Russians often complain that Westerners think their country is nothing but vodka and dancing bears, and this is, quite literally, what Barber of Siberia supplies.  Had a foreigner made this movie, it would have been offensive.

The irony of this film about two generations of men training with guns is that it misfires: aimed at a Western audience, the only target it hits is domestic.  For an avowedly patriotic director, that should be enough, and yet it clearly wasn’t.  Among the many reasons that the film flopped in the West is that the very question of Russian identity is primarily a Russian concern.  In his attempts to make a film for export, Mikhalkov distorts his characters for an imagined foreign gaze that will never be turned on them. The film’s tag line, “He’s Russian.  That explains a lot” comes from an exchange between an exhausted American drill sergeant and the mother of the recruit whose stubbornness has driven the officer to distraction.  But what, exactly, does it explain? And to whom?

Next: Dancing Bear, Bring Me My Vodka!