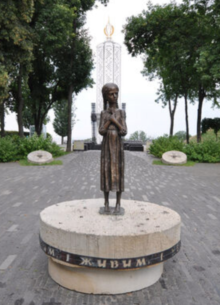 Above: Part of the Holodomor Victims Memorial in Kyiv, Ukraine

Karolina Koziura is a PhD Candidate in Sociology and Historical Studies at The New School for Social Research and a Visiting Scholar at the NYU Jordan Center for the Advanced Study of Russia.

The process of the opening of the Soviet archives, which began in the late 1980s, led to unprecedented access to long-closed Communist Party and government archives revealing those parts of Soviet history that could not be officially studied until then. This “file fever,” as Katherine Verdery called it, has been driven by the urge to document the (un)known past and what might be regarded as the truths of the Communist regime. In the Ukrainian and perhaps even more widely the pan-Soviet context, the Holodomor, as the Great Ukrainian Famine of 1932-1933 is known, became one of the most researched – yet also most contested topics. The newly rediscovered piles of clandestine materials, however, not always helped us to understand both the logic behind this, among the most tragic periods in Soviet history, as well as the rationale behind the Soviet secrecy regime.

Today, researchers who investigate the Holodomor need to grasp the overwhelming amount of documents, publications, and articles that seek to frame and give meaning to what survivors often recall as the hungry days. Since the early 1990s, the study of the Holodomor which has been centered on archival rush and knowledge retrieval has been slowly dominating academia and politics in the independent Ukraine. Since the first collections of documents from Soviet archives were published by Feliks Rudych and Ruslan Pyrih, the number of similar volumes has grown steadily, reaching over 250 publications during Victor Yuschenko’s presidency. Selectively chosen, bureaucratic papers taken from and often assembled by previous Communist party and Soviet government archives located in Ukraine chronicled the step-by-step events, attitudes, and decisions of rank-and-file Soviet officials as well as those of Communist leaders that led to the vast Famine. The event that was severely silenced and denied by the Soviet authorities, had been given clearly demarcated time boundaries of 1932-1933, rationality, and anti-Communist framing by the Ukrainian historians and archivists working in the fragile and unsettled post-communist reality. The Soviet “atrocity files,” to use Kirsten Weld’s phrase, were repurposed to serve a post-1991 pursuit of justice and accountability.

However, the study of the sources on the Holodomor beyond these published collections of documents is a more complex endeavor. Archives, Ann Stoler teaches us, are not merely rational embodiments of state power, but sites of epistemological uncertainty and political anxiety. The documents often used and repurposed in these collections were parts of complex bureaucratic conversations and subjected to various changes, manipulations, and even destruction. Not only were archival records transferred multiple times and partially destroyed but even older index cards were removed from the archives after the years of the Famine. Together with the purges of 1937, piles of documents from the early 1930s disappeared from the archive.

In the 1930s holodomor was not yet “the Holodomor” as we know it today. In the flow of bureaucratic papers, letters, investigation orders, and administrative notes that circulated among different levels of the Soviet administration the word “holod” (starvation) is almost never mentioned. In fact any records that relate to the Famine were subjected to severe discursive cleansing with carefully chosen wording and widespread uses of euphemisms such as “food difficulties,” “mismanagement,” or “temporary problems,” suggesting moments in which silencing entered the production of sources – and hence the archives. The central question becomes not of visibility but of secrecy. Not what the Soviet bureaucrats wanted to know about the situation on the ground but how they pretended not to know and why.

The developing tragedy of the Famine and the scale of its denial is then not the question of finding “evidence” in the archives but rather engaging with the relations of power in which bureaucratic papers were created, sequestered, and rearranged. Sources, Stephen Kotkin writes in his famous essay, “The State-Is It Us? Memoirs, Archives, and Kremlinologists,” are not mere means of inquiry but objects oriented towards producing social and political effects. Archival papers are multi-vocal discourses engaged in creating and sustaining bureaucratic networks, privileged knowledge, and state security. The control and manipulation of information within the Soviet apparatus of power produced effects that transcend their time, influenced their preservation, and determined their use in the future.

Understanding this double logic of archives as technologies of political repression yet also social reconstruction and counter-memory seems to be especially important when researching the cases of mass atrocities, political violence, and humanitarian catastrophes in Soviet history. Studying the Katyń massacre of Polish officers, as thoroughly analyzed by Alexander Etkind, means first understanding the processes of destruction and fabrication that informs archival production. The legacy of the Leningrad Siege needs to be contextualized with Soviet attempts to repress memory and to enforce the forgetting. The scale of the Chernobyl disaster further demonstrates that multifaceted forms of denial have effect not only on academic knowledge but, above all, on the lives and health of millions of people.

These and many other similar examples demonstrate that we are in need of new analytical approaches to understanding the Soviet archives. This includes thinking about both the incomplete and partial character of sources as well as the cumulative character of silencing which together inform the construction of historical narratives. It also demonstrates that the tensions of interpretation that these archives generate, include their transition from institutions that served the repressive regime to places for the pursuit of justice. Moreover, now, perhaps more than ever, scholars working with the Soviet “atrocity files” should reflexively think about their own positionality and the power struggles that brought the archives together. That being said, collections of documents and published archival sources are important tools for scholars which help them to orientate themselves within the vast scale of the Soviet bureaucratic production. Without the knowledge and expertise of many archivists and historians, the study of events such as the Holodomor would be even more difficult, if not actually impossible.