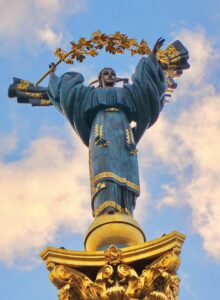 Leora Eisenberg is a PhD student at Harvard University, where she studies processes of Russification in Soviet Central Asia.

We were looking at a poem when I asked my student Iana to translate the lines she’d just read out loud. Pausing for a moment before beginning her translation, she asked, “is Ukrainian okay?” I nodded. Relieved, she began translating—into Russian.

In my recent experience leading English classes for Ukrainian refugees, I have noticed students fluidly moving between Russian and Ukrainian. This phenomenon is well-documented across Ukraine, and there’s no need to rehash it here. I’ll admit, however, to being surprised: wouldn’t war with Russia, the symbol of the Russian language (and home of its institutions, such as the Pushkin Institute of the Russian Language), produce antipathy toward it, at the very least? And wouldn’t this antipathy lead people to abandon Russian en masse in order to assert their Ukrainian patriotism and difference?

This view, while somewhat simplistic, is hardly unsubstantiated: in the first days of the war, major Ukrainian media outlets such as Ukrainer exhorted Ukrainians to stay calm, support the army, and speak Ukrainian. Public figures like interior design mogul Veronika Zubko, who had previously led her social media largely in Russian, suddenly switched to Ukrainian. Seemingly overnight, public-facing life became Ukrainian, with one major exception: when individuals addressed the Russian public.

Singers Alina Pash and Jerry Heil, for example, posted on Instagram in Russian in order to tell Russian audiences to “wake up and finally tell your loved ones [this] information [about the war]” or “show that you do not agree with these killings [and] with Putin’s bloody war!” Even Ukrainian President Volodymyr Zelenskyy gave an emotional Russian-language address on February 23rd in which he asked, “Do the Russian people want war? […] The answer depends only on you, the citizens of the Russian Federation.” This public use of Russian in a clearly delimited context only highlights the war’s impact on Ukrainians’ language habits: the Russian language is increasingly meant to urge Russians to take action, while Ukrainian slowly becomes the sole language of the public sphere.

But Iana translated the poem into Russian, not Ukrainian, suggesting that private language usage is a different story. When recently interpreting at an event for Ukrainian psychologists, I was instructed not to speak Russian or mention the Russian language for (justifiable!) fear of upsetting the participants. They themselves, however, often spoke Russian first. Private individuals’ social media posts and announcements about transportation out of cities under fire and deliveries of food, medicines, and water were just as often in Russian as in Ukrainian. My Ukrainian friends—even those who knew I speak Ukrainian—did not switch to Ukrainian with me once the war began. Again, I was surprised: wouldn’t the war push them to switch away from Russian? Now more than ever, wouldn’t Ukrainians want to speak Ukrainian?

Perhaps the answer is yes—but even so, Russian language use among Ukrainians has historically had little to no bearing on levels of patriotism: as Volodymyr Kulyk, Dominique Arel, and others have demonstrated, post-Maidan Russian usage is not at all tied to (a lack of) patriotic sentiment in Ukrainians. And perhaps more primally, Ukrainians’ private life in times of war—in moments when they may be most stressed and most tense—may well continue in Russian, given that at least 36% of the population claims to speak it at home. Besides, dividing Ukraine up, as dozens of scholars have, into speakers of Russian and Ukrainian is increasingly losing its utility as a sociological tool, given that even in 2013 (pre-Maidan!) Ukraine, 70% of individuals in predominantly Russian-speaking areas (cities like Kharkiv or areas like Donbas) considered themselves Ukrainian, as compared with 90% of individuals in Ukraine’s west and center. And in the nearly ten years since 2014, which have included significant political movement away from Russia, the percentages have likely evened out.

Before and during the war, Ukrainians used both Ukrainian and Russian in their everyday lives, and yet the vast majority of them identify as Ukrainians. In fact, Ukrainians are more united now than ever before, even as international coverage persists in dividing them by language. NBC News pointed to  “Russian Speakers in Ukraine” who “Reject Putin’s War,”; France24 wrote about how “Ukraine’s Russian speakers worry about being ‘saved’ by Putin”; and the Washington Post published an op-ed asking “What do Ukraine’s Russian-Speakers Really Want?”

Much of this language-centric rhetoric, of course, is a response to Vladimir Putin’s claims of discrimination against Russian speakers in Ukraine. Yet the continued focus on linguistic difference among Ukrainians obscures the bilingual reality and general sense of unity in which they’ve lived in the past.

Russian may not disappear from the Ukrainian private sphere for some time, but its public usage, not only in Ukraine but throughout the former Soviet Union will likely be curtailed. The Kyrgyz language popularization group tilimpoz, which has a page on Instagram with nearly 25,000 followers, wrote on February 26 in its Telegram channel, in Kyrgyz and Ukrainian, that “our sanctions on Russia’s actions are writing only in Kyrgyz!” A Kazakh language popularization group, Qazaq Grammar, posted translations of Kazakh words into Ukrainian, rather than Russian, which is spoken by nearly all of the Kazakhstani public. Even Svetlana Tsikhanouskaya, the almost-President of Belarus, seems to be posting more in Belarusian these days: her Instagram post calling for “no to war,” was in Belarusian, not Russian (spoken as a primary language by 70% of Belarus’ population, according to the most recent census data available online).

The use of Russian has begun to shift in response to Putin’s war, becoming less common throughout the former Soviet bloc. Yet Ukrainians may continue to use Russian in their private lives, defying attempts to classify them according to one or the other language. As the case of Ukraine demonstrates, bilingualism can coexist with a strong and unified sense of national allegiance.