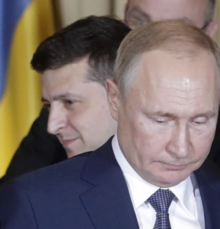 Kathryn David is the Mellon Assistant Professor of Russian and East European Studies at Vanderbilt University. She completed her PhD at NYU in 2020.

On 12 July 2021, Russian President Vladimir Putin published a historical essay titled “On the Historical Unity of Russians and Ukrainians.” He frames the essay as a follow-up to a comment he made on “Direct Line,” the annual call-in show where Putin answers questions from constituents. On this occasion, Putin characterized Russians and Ukrainians as “a single people” [Rus. voobshche odin narod]. Expanding on his original comment, the Russian president offers a version of historical events suggesting that today’s ruptures between Russians and Ukrainians have no basis in reality, but are instead rooted in artificial divisions constructed and exploited by both foreign powers and the Soviet Union.

Putin’s version of history is exactly as skewed as we might expect given that Russian and Ukraine are at war. It’s also nothing new. As Alexei Miller and other historians have pointed out, Putin’s analysis draws on centuries-old ideas about a shared Russian (Rus’) culture and history applying to the Russian, Ukrainian, and Belarussian peoples. Putin’s essay is notable not for its content, but for his decision to promote these particular ideas at this moment in time.

“On the Historical Unity” is not the first sweeping interpretation of Russian-Ukrainian relations to signal a possible reset in the region. On 12 January 1954, an article titled “Theses on the 300th anniversary of the reunification of Ukraine with Russia” appeared in Pravda, signaling its adoption as an official historical narrative by the Central Committee of the Communist Party.

The 1954 narrative closely resembles the one Putin presented last week. Both essays imagine the medieval kingdom of Kyivan Rus’ as the origin of the modern Russian state and argue that it was foreign interventions by Poles, Turks, and Germans that pulled apart the unity of the “Rus’ peoples.” Both essays point to a common culture and language that Russia strived to preserve, ensuring the three peoples in question remained unified despite the borders and nationalist activists that repeatedly attempted to divide them.

Crucially, the publication of the 1954 “Theses” coincided with the transfer of Crimea from Soviet Russia to Soviet Ukraine. Scholars have yet to reach consensus on the reasons for the decision to transfer Crimea from one Soviet republic to the other. Public discourse tied the transfer of Crimea to the Union-wide celebrations of the occasion that prompted the “Theses:” namely, the tricentennial anniversary of the Treaty of Pereiaslav, the 1654 agreement that placed the semi-autonomous Cossack lands in today’s Ukraine under the control of imperial Russia. The “Theses” celebrate this treaty as a step toward Ukraine and Russia’s “reunification,” the first stage in the process of re-unifying the lands of former Kyivan Rus’. The process of “reunification” would only be completed centuries later by the Soviets, first with the Bolshevik revolution that created the USSR, and then in the Second World War with the annexation of Eastern Poland. In this framing, the transfer of Crimea from Soviet Russia to Soviet Ukraine becomes a kind of anniversary present.

Context makes the similarities between the historical narratives from 1954 and 2021 all the more puzzling: Why does one regime’s insistence on Russian and Ukrainian connectedness lead it to hand Crimea, the “garden” of the Russian empire, to Ukraine, all while providing the foundation to seize it back for another?

The 1954 Pravda essay appeared just a few weeks after the execution of notorious Soviet spy chief Lavrentiy Beria. In the brief period between Stalin’s death and his own, Beria had advocated for a return to earlier Soviet policies that promoted non-Russian minorities and cultures. In Ukraine, Beria wanted more representation in the Ukrainian Communist Party for Ukrainians from the newly Soviet Western part of Ukraine. Beria was even prepared to resuscitate Ukraine’s Greek Catholic (Uniate) Church, releasing the church’s leader from the Gulag in order to permit the Vatican, one of the foreign powers blamed for dividing Russians and Ukrainians, a spiritual presence in the USSR.

All of these plans died with Beria. The publication of the 1954 Pravda piece signaled the ascension of Nikita Khrushchev and his vision for Soviet Ukraine. In publishing the “300 Theses,” Khrushchev was signaling to cadres the type of Ukrainian history and culture that was acceptable to promote. His was a vision of Ukraine that fit into the grand historical narratives adopted by the postwar USSR, narratives that, as John Armstrong argues, emphasized the consolidation of the USSR “around a solid core of East Slavs, with Belorussians and Ukrainians regarded as junior partners of the Russians.” Ukraine was invited to be part of this group of privileged republics, which, in a way, tied its importance to its historical connection to Russia. The 1954 essay thus provides a happy ending to Ukrainian history through the “unification” of Ukrainian lands in the USSR.

Some sixty years later, Putin picks up where the “Theses” left off, reflecting on the catastrophes that befell Ukraine as soon as it left the USSR and its fellow East Slavs. Per Putin, because Ukrainian leaders sought a separation from Russia, they should no longer be welcome as inheritors of the territorial legacy of Kyivan Rus’. Russia must once again take on a role as the guardian of Rus’ culture, whereas Ukraine has become a foreign power from which land must be recovered.

By publishing this essay, Putin reframes Russia’s most recent interventions in Ukraine. Shifting focus from the ugly realities of a war and territorial annexation whose costs many Russians do not want to bear, he concentrates on the abstract notion on what Russians lose if Ukraine continues on its current path. Influence in Ukraine represents not only geopolitical power, but a chance for Russia to recover what historian Serhii Plokhii has called the “lost kingdom”: Ukrainians lands that are central to Russia’s conception of itself not only as an empire, but as a nation. In recounting historical episodes from the conquest of Caucasus to victory in the Second World War as evidence of unity, Putin seeks to remind Ukrainians of Russia’s role in what he views as their shared history. But he is also sending a message to Russians, reminding them that Ukraine is not simply an old imperial territory that it would be nice to have back, but a central element in Russia’s past and future. His essay suggests that those who advocate for a politically, economically, and culturally independent Ukraine are actively divesting Russians of their heritage and destiny.

Some observers have interpreted this essay as an indication of impending escalation of Russia’s military presence in Ukraine. In a follow-up interview about the essay, Putin seems to ask Ukraine to reconsider the rejection of economic and political ties with Russia that animated the Maidan protest movement that began in the winter of 2013. Putin further argues that the arrangement Russia proposes with both Belarus and Ukraine would be closer to a European Union than a USSR.

This union would have as its foundation the “triunity” of the Russian, Ukrainian, and Belarusian peoples [triedinyi narod], clearly with Russia and Russians as “first among equals.” Putin’s essay may be speaking to Ukrainians about what it would mean for their country to embrace this arrangement, but he is also describing, for the benefit of Russians, the role Russia could play in Eastern Europe — if it weren’t for those pesky advocates of Ukrainian independence.

The impression Putin wants to leave is that there is no Ukrainian history apart from Russia, and that ultimately Ukraine owes its existence as a sovereign state both to imperial Russia and the Soviet Union — the same claims made in the 1954 Pravda piece. Yet lurking behind this narrative are some uncomfortable questions: What is Russia without its empire? And what is a Russian empire without Ukraine?