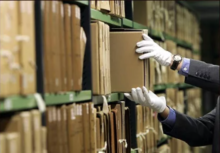 Greg Afinogenov is Assistant Professor of Imperial Russian History at Georgetown. He is the author of Spies and Scholars: Chinese Secrets and Imperial Russia’s Quest for World Power (Harvard University Press, 2020).

If you’re a Russian historian, one of the first questions you usually get from an informed outsider is about the archives. Has the opening of the archives resulted in blockbuster revelations? Isn’t Putin shutting down the archives for good? You might protest that in terms of accessibility and ease of use, most Russian archives are more open than ever (at least pre-COVID), but it is unlikely that you’ll make a lasting impression. The perpetually tantalizing, perpetually closing Russian archives have a special mystique.

In my article, “Russia’s Secret Archives: A Genealogy,” I trace this trope further back than you might expect. Russian secrecy became an obsession among Western visitors as early as the sixteenth century, when foreign diplomats like Sigismund von Herberstein wrote detailed accounts of Russian life that they promised would reveal “the most intimate affairs of the Muscovites.” As it would eventually develop, the archival revelation trope served useful functions for foreign interpreters of Russia. It helped legitimate them as insiders with special access to Russian secrets, and it also allowed them to depict the country as unusually illiberal and autocratic.

Two key developments shaped the modern form of the trope. One was a growing emphasis on the role of archives as an institution. Starting in the mid-seventeenth century but especially after the Petrine era, the Russian state began to accumulate archival collections of secret documents. Unsurprisingly, these archives became targets for spies, but they did not see anything unusual about the existence of Russian secrets: every European state had its equivalent.

The second major shift came after the French revolution, when archives became one of the places where a broader public (including an academic one) was invited to supervise the state’s workings. Suddenly Russia became unusual for the degree of secrecy in its political life, and this secrecy became an emblem of its fundamentally tyrannical nature. Anti-Russian pamphlets disseminated disinformation about Russia supposedly from its own carefully guarded archives.

The most famous such document was the so-called Testament of Peter, which claimed to reveal a Russian plan for world domination drawn from its most secret archives (nobody ever explained which one). When it originally appeared in the 18th century, it did not make a massive impression, although Napoleon (ironically) tried to use it in a propaganda campaign on the eve of his 1812 invasion. Only later, in the nineteenth century, did the document gain currency as proof of Russia’s nefarious plans—a sign that secret archives had now become an emblem of the country’s political backwardness. Later, the Testament became so influential that even Harry Truman made reference to it.

When the Bolsheviks came to power in 1917, they immediately began to publish the secret documents of the Ministry of Foreign Affairs. Their rhetoric as they did so closely resembled the earlier claims of nineteenth-century propagandists, but with a crucial change: instead of the secret archives revealing the plans of the Russian Empire, they were now held to expose the machinations of the worldwide capitalist class. This rhetoric of exposure, of course, didn’t prevent the Bolsheviks from accumulating secret material in their own archives, which in due course were targeted by their Cold War opponents using the familiar language of archival secrecy.

Archival revelation became such a reliable standby that as the Soviet Union was collapsing, it was revived in an ambitious joint project between the Library of Congress, America OnLine, and Rudol’f Pikhoia, chairman of the RSFSR Committee on Archival Affairs. The “Secret Soviet Archives Online” were meant to expose Bolshevik crimes through the lens of a selection of declassified documents, though there were few real smoking guns. Today the project seems like a 90s relic, with its claims that Stalin had planned the murder of Kirov (still unproven) and its repurposing of Cold War tropes like Lenin’s “totalitarianism” as sensational new discoveries.

The ultimate irony of all this is that the US government itself maintains one of the world’s most elaborate collections of secrets. These, too, are only the tip of the vast iceberg of materials to which no democratic public can gain access. Both in Russia and elsewhere, corporate and other private archives often remain inaccessible to researchers—it’s here, not at the level of the state, that some of the most important decisions affecting our lives are made. When we obsess over Russia’s archives and their supposedly imminent closure, we miss the way a pervasive culture of secrecy looms over our politics, no matter what country we live in.