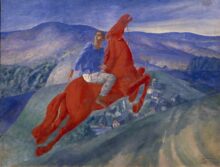 Matthew Rendle is a Senior Lecturer in History at the University of Exeter. His work focuses on Russian history during the late Imperial and revolutionary periods.

Several decades ago, Keith Baker explored how the French Revolution was “invented” as people’s conceptions of revolution, and the role that they could play in it, transformed during 1789. Russians, of course, could draw on longstanding European revolutionary traditions by 1917, as well as decades of their own revolutionary activity, and did not have to “invent” their revolution in the same way; they were well aware of the power of revolution and their potential agency as revolutionaries.

Nevertheless, a certain amount of “invention” was still seen as important. All Russians were determined to make sure that February 1917 was portrayed as a revolution, not simply as a collapse of tsarist power, and moreover a “Great” Russian Revolution on a par with its French predecessor. In doing so, they were enhancing transformative power of the revolution, making a return to the old regime more difficult and real change more likely. Beyond this, however, each political group wanted to frame the revolution differently — emphasizing certain elements and individuals over others when explaining what had happened could help them claim greater legitimacy for a leading role in the revolution’s future progression.

The different narratives surrounding the revolution can be seen most clearly in the explosion of print culture after the February Revolution as new freedoms and visions reinvigorated existing publications and prompted new ones. The pamphlet, especially, boomed. It has been estimated that 27 million odd copies of over 500 “socialist” pamphlets  and 11 million copies of over 250 “bourgeois” pamphlets were published in Petrograd alone. Most were accessible to the majority of readers in terms of price, language and length.

For sympathetic pamphlets, the defining moment of the revolution was the soldiers’ revolt. A few trace roots back into the nineteenth century or 1905, or sometimes the discord evident in the angry speeches in the Duma in late 1916, especially if favorable towards the Duma leaders now in government. Very few start – as do most historians – with the strikes that marked International Women’s Day and these ignore the role of female workers, portraying the strikes as simply a more intense version of existing unrest. For the majority, the “historical” and “great” day when the “revolution” began came with the soldiers’ revolt on 27 February, when “great legends” were born and the “revolutionary character” of events became clear.

Several pamphlets focus entirely on the revolt, recreating an almost hour-by-hour chronology events complete with recreated dialogue, dramatic scenes and heroic figures. Individual pamphlets were published on each of three prominent regiments involved in the revolt, while those pamphlets with illustrations prioritized the troops, with one publishing now iconic photos of troops on the streets, commandeering vehicles and arresting police.

All of these accounts stress the enormity of the February Revolution, which is described as something “great” that happened, a “great” revolution that everyone participated in, or a “huge, historical event.” Many stressed its significance by placing February alongside other examples of revolution, with one comparing the soldiers’ revolt to the storming of the Bastille and other authors publishing accounts of 1789, 1848 and 1871 as points of comparison.

These pamphlets take slightly different approaches to the issue of revolutionary leadership. One was to narrate a revolution driven largely by the crowds that resulted in state organs headed by the “first ministers of the revolution” or the new “people’s ministers,” or even the “sons of the people.” The greater ability of the Provisional Government to publish pamphlets facilitated accounts where key leaders in the new government, such as Guchkov, Kerenskii, or Miliukov, played decisive roles. In this setting, these figures and their speeches sometimes overshadow the role of the people. Other pamphlets adopt a factual approach, but in simply informing readers who was in the new government and providing biographies, they were promoting the leadership roles of these individuals.

If the revolution’s objectives were clear — removing an autocrat, building a free country — then so were its achievements. These pamphlets usually end with the abdications of Nicholas II and Mikhail, which heralded a new order. Even those that tracked subsequent events marked the abdications as the “first achievement” of the revolution; it had overthrown the “rotten nest” of the old regime, pronounced one, or “destroyed” the Romanov dynasty according to another.

Socialist pamphlets, of course, provided a different narrative, emphasizing socialist leaders over liberals and conservatives, and the popular organs of the soviets over the government. Irrespective of their political view, though, pamphlets had within weeks “invented” Russia’s revolutionary tradition, forged a Russian revolution from February. The key events were in place, the leaders credited and the achievements clear.

Doing this was important. For the Provisional Government, the focus on the soldiers’ revolt stressed the revolutionary element of events in the face of accusations that it was an unelected organ representing the bourgeoisie. In these accounts, it had emerged from a popular revolution that achieved dramatic successes and symbolized the unity of all the Russian people. Its legitimacy was enhanced further by the stress on the revolutionary activities of its leaders, and fostering such legitimacy was crucial in the absence of democratic elections.

Finally, starting the revolution on 27 February and finishing with the abdications on 2-3 March, while assigning agency to individuals and organs of power, portrayed February as a discrete event and a political revolution, suggesting control over the revolutionary process. This conveyed the government’s hope that the revolution itself had ended, and that it was restricted to political change rather than fundamental social reform. Comparisons with other revolutions were employed to argue that only unity secures a successful new order, while disunity facilitates counter-revolution. Therefore, the Russian people needed to do their duty and support the new government. This message was accepted initially, but unfortunately for the government, such sympathies proved short-lived as socialist narratives started to prevail.