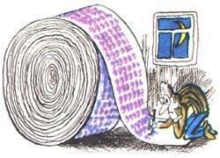 Though electronic systems are beginning to take over in public transport, the old so-thin-it-disintegrates-in-the-heat brown paper tickets are still prevalent in Russia. They come on roll-like raffle tickets, and the bus conductor, depending on your bus and city, either hangs them from a loop, or distributes them by hand. Ticket numbers range from 000000 to 999999. Imagine who the schlemazel who has to write down all those little numbers!

Some of these tickets are lucky. If the first three and last three numbers add up to the same sum, the ticket is lucky. My most recent lucky ticket was 894858.

The tickets are beginning to be phased out. In some Marshrutkas, that is, short buses for big people, many conductors leave the rolls swaying on hangers near the seat, and people may take tickets at their will as receipts. Though often they don’t bother. On other city transport systems, as on the buses, trolleybuses and trams here in Kazan, the conductor always gives a ticket in exchange for cash, but not to those who for with cards (and, often, retired people wield digital transport cards.)

By the way, a trolley bus is a bus that is powered from electricity from above. There is no track and it rides on regular roads. They are notoriously slow but often cheaper to encourage use, and a favorite of senior citizens. One often hears the following phrase about the trolley bus, “We could take the trolley-bus, but…”

So let’s just do a little wikipedia math:

In order to absorb the luck, as you may have guess, you must consume the ticket by eating. I have heard that you are supposed to tear it up to powder (the tickets are usually of poor quality paper) and drink an elixir, that you can soak it in water first, or that you can simply infuse your tea. It counts as long as the dye seeps out. Certain celebrity Muscovites have been known to huff their lucky tickets.

Everyone has the right to his or her own style for lucky tickets. For example, if the sum of the first or last three numbers or anagrams, this may count as well. For example 651993. The first three add up to 12, the second to 21. Others might say that if the sums are off by one or two, it still counts as luck: But only a little luck, or luck that you still have to earn, by some kind of good deed later in the day. This secret impetus for good deeds is between you and the bus gods, but it feels real.

There is also a phenomenon of the addicted gambler, so in search for luck, he will take a ride on the bus only to purchase as many tickets as he takes. Say his ticket is 20 away from a “classic style” lucky one, he goes to the conductor and buys 20 more tickets. The conductor should refuse. A conductor may sell excess the tickets leading to a lucky one for a profit, or, likewise, auction off the lucky ones. It may not be honest, but who can blame them for wanting to put bread on the table?

I wish I could end on a bittersweet note and say that, perhaps, the end of the paper ticket is nigh, and the world will suffer a great loss as this tradition as old as the Soviet Union dies. I can’t say the end of paper tickets is coming. For all we know, the great digital tickets in the sky have lucky combinations, too.