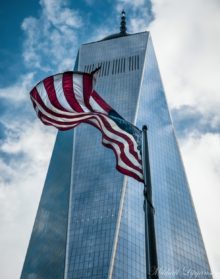 Mikhail Lipyanskiy is an adjunct instructor in Comparative Literature at Queens College and John Jay College.

No, we did not come from a war-torn country. No, we did not escape bomb threats and militants. But we are refugees. We came seeking shelter and opportunity – to the land that was the epitome of both. I should not need to exonerate my status by debating the conditions of pre-and-post-perestroika Ukraine. We knew well enough who we were. It said so on our passports, on our birth certificates and, let’s be honest, on our faces. When in the third grade I was accosted by a bully seven years my senior who came up to me, as I was “on duty” in the halls of our school – I was not surprised. Not by the attack, not by the “Save Russia, kill the Jews!” that he yelled as he punched me right in the stomach…No, that was expected. It had happened before, whether physical or mental – discrimination was ubiquitous. Whether it was in schools, or at work, in colleges or in the army. It was not our religion we were despised for; it was not even our blood. It was simply our “otherness” that was so easily scapegoated. We were the “enemy within” – a target for those who could not understand why their own life was terrible.

There is an old Soviet joke – a truckload of bread was promised to be delivered to a local store. By 6 AM there was a line of people patiently waiting for bread. At noon the director of the market came out and announced that the truck will be late, and the shipment smaller than originally promised. No Jews will be allowed to buy bread. At 6 PM, there was still no bread, and the director once again came out to make his announcement. The truck will be later still, and the shipment even smaller. Only veterans of WWII will be allowed to buy the bread. At midnight, the director finally announced that there will be no bread today. The grumbling crowd dispersed, and one person could be heard telling another “Did you see? Again the Jews lucked out! They didn’t have to wait!”

And so, we came here… not so fast. Let’s take a step back. Came here how? Refugee vetting is no simple matter – “extreme” or not! First, one must gather all the documents, in several copies, with English translations. Oh – that is the easy part, right? Do you think the clerk didn’t know why you wanted the copies? Do you think they didn’t hate you for “getting out”? Surely, they did…And you needed them to like you, to be your friend. Thus you begin to sell things, books first, then heirlooms, then whatever is left. To the last penny. And you lie. A lot. At school, at work, at home…even to your friends… because “who knows?” What if you don’t get the status…what then?A year and a half later,  after an interview in Moscow, after bowing and scraping, after multiple boxes of chocolate and cognac with envelopes full of “gratitude” to every clerk that had to stamp or copy or print some basic document, you are finally granted that magical status of a “refugee”.

You are now free to gather your bags. Nope, sorry, your bag. Only one, per person – that’s it, basta!  Put your life in that suitcase, but leave room for a pillow and a blanket (because those, we are told, are expensive in “Amerika”). Tell your children they can have one stuffed toy to bring. Maybe two… maybe a few plastic soldiers. Then you sell everything that is still left, everything you can – perhaps you will gather enough for a month’s rent in that magical country that you are hoping to get to… You sell your apartment too, for a sliver of what it is worth, to a man who makes sure that you understand he is doing you a huge favor; he takes all the risk (oh the martyr) by buying an apartment from a “traitor”. And you get yourself to Moscow.

The last goodbyes from friends and relatives, the last humiliation too, as the border agents take anything they can from your already pilfered possessions. They tell your children that the toy in their hands does not fit into the suitcase and thus will not be allowed through, too bad. And then – only then –  do you board that plane to freedom…

I cannot imagine the terror in the hearts of those refugees who were “turned back”. Stop. That’s not true. Yes I can. I can imagine – because I am not afraid of empathy. I am not afraid to remember the fear and the excitement that “Amerika” represented to us, to refugees. I will not be suckered into the “chaos vs order” narrative. I will not buy the false civilizational mythology of survival. We are not separate civilizations. “They” are not agents of chaos. When the militants destroy ancient artifacts in Iraq – it is not “their” history being destroyed. It is mine, ours! Where would we be without ancient Mesopotamia? Without Ur, Babylon, Ashur and Nineveh? What about the medieval Damascus? The centers of science and literature and law… Our civilization does not depend on their destruction. It never did. Our civilization has moved past that myth of survival. Look around – we are all the same. We are all refugees in this land. We came seeking shelter and opportunity. We came to earn a better life, not to take it. I am a Refugee. I am an American. I am a Jew. I am a Muslim. I am you.