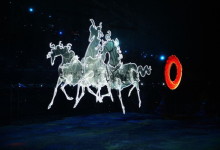 Edyta Bojanowska is a professor of Russian Literature at Rutgers University and the author of Nikolai Gogol: Between Ukrainian and Russian Nationalism.

In the splendid pageantry of the 2014 Sochi Olympics, the image of the luminescent Russian troika – a team of three horses at a slow-motion gallop – drew popular appeal.  It was the nineteenth-century writer Nikolai Gogol who in his novel Dead Souls (1842) made this image into Russia’s most revered national symbol.  Gogol’s troika, in its soaring flight, transmogrifies into Russia itself: an icon of the nation’s elemental energy and limitless potential.  This imagery is familiar to all Russians from childhood, as most had to memorize this passage in school, and would almost certainly have been foremost in any Russian’s mind at the sight of the Olympic troika.

Yet what the rest of the world perceived as a quaint cultural mascot had additional layers of meaning for the Russian public that were overlooked in western media coverage of the Olympics.  For Russians, the image would have resonated with Gogol’s troika passage and its prophecy of Russia’s primacy among all nations.  What the Russians therefore likely saw in the Olympic troika was a defiant symbol of newly assertive Russian nationalism.  In the closing sentence of Dead Souls, all nations and states “step aside,” giving Russia-troika “the right of way.”  More than just rooting for the Russian national team, the troika also bolstered the political significance of hosting the Olympics in Russia: an effort to solidify Russia’s image as an ascendant power reclaiming its rightful place on the world stage.

Since the Olympics, Russia has moved to reclaim its place on that stage in a very different way, by annexing the Crimea, amassing an invasion-capable army on Ukraine’s eastern borders, and sending masked operatives into eastern Ukraine.  The Olympic afterglow long extinguished, we may now think back to the fiery ring pulled by the mascot troika not as the sun, as we thought back in February, but as something more ominous.  The Russian alphabet video released on the occasion of the Sochi Olympics proudly displayed the word “Empire” as the example of the Cyrillic letter “I” with which the word’s Russian equivalent begins (“Imperiia”).  In recent months, empire has come to signal not only Russia’s historic pride but a revived political project.

The 2008 South Ossetian episode aside, it is not surprising that Ukraine is the arena in which President Putin’s mission to gather the ex-Soviet lands, as many now fear is the case, would come into focus.  Unfortunately for Ukrainians, Ukraine has always had a special place in the Russian national-imperial imaginary. Tsarist ideology treated Ukraine’s incorporation into the empire as a reunion with long-lost kin, the “Little” Russian brothers of the “Great” Russians.  Unlike western European empires, the Russian and Soviet empires encouraged assimilation of their disparate peoples, particularly East Slavs.  If recent word on the street is any guide to popular attitudes, a sizeable part of Russian society does not fully accept that Ukrainians might view themselves as a separate people.  Even such dissident writers as Solzhenitsyn or Brodsky considered Ukraine integral to Russia.  The sending of tanks notwithstanding, President Putin refers to Ukrainians as a brotherly nation.  Yet what to the West may sound like conciliatory rhetoric resonates differently for Ukrainians.  Kinship as an argument for imperial rule: Ukrainians have historic reasons to feel nervous.

With political pluralism and free media systematically crushed by the post-Yeltsin governments, these attitudes and assumptions have flourished largely unchallenged.  They are now actively encouraged and exploited by a government bent on reconstituting the empire and on demonstrating to the domestic Russian public that deposing a leader, however corrupt and criminal, will not go unpunished. Though the participation of right-wing groups in the Maidan protests and post-Maidan politics is indeed troubling, Moscow’s characterization of the current Kiev government as a fascist, neo-Nazi junta is a transparent propagandistic tactic to discredit a country that is slipping out of the Kremlin’s grip.

Yet with all eyes on the rightist advances in Ukraine – or France or Hungary, Russia’s own eruption of populist nationalism passes under the radar of international scrutiny, focused as it is on the actions of a few political actors. Meanwhile, the official Russian political commentary and the propagandistic falsehood relentlessly pumped into the media, have been nothing short of scary for anyone familiar with the history of Russian nationalism (with occasional touches of the bizarre). These seem to be having an effect.  President Putin’s approval ratings rose to 80 % as a result of his actions in Ukraine; he now calls domestic opponents “national traitors.”  He is spearheading an alarmingly nationalistic culture policy that is likely to lead to a revision of existing legislation. The restless nationalist and neo-imperial energies unleashed by Russia’s political leadership – though they are by no means universally shared by Russian society (see also here) – are a great cause for concern in a country with powerful military and economic means at its disposal to effect such visions in its own society or its larger neighborhood.

On the eve of the Russian special units entering the Crimea, the Russian-speaking population of Ukraine was in no particular peril (unlike the documented genocide of Muslims that led to the separation of Kosovo from Serbia) – at least nothing on the scale warranting an armed invasion.  It is unclear what “right,” under international law, the Russian Federation has to protect Russian speakers in what it often calls its “near abroad” – other than its own claim to it.  It is Russian interference that has spurred the region’s ethnic tension to levels not seen in recent times.  President Putin seems to be exacerbating problems that he claims to be remedying.

Beyond Ukraine’s strategic and economic value, the cultural factors that have played a role in making Ukraine central to Russia’s geopolitical self-image continue to inform popular attitudes.  Christianity entered East Slavic lands through Kiev.  And it so happens that the Kievan medieval polity has been contested by both Russian and Ukrainian historians as the origin of their respective national histories.  For many Russians to “give up” Ukraine would seem like severing historic roots.  Such complexity did not assist, say, Britain’s decolonization from India.  Of course, this does not excuse the unwillingness of many Russians to mentally process Ukraine’s right to sovereignty.

In the eighteenth and nineteenth centuries, many Ukrainians made signal contributions to Russian statecraft, imperial administration, and culture.  One of them was in fact Gogol: a Ukrainian who ascended to the status of a national Russian writer.  He set foot in Russia for the first time only at the age of twenty.  Throughout his life, he played with a double national allegiance: his Ukrainian cultural and ethnic identity coincided with his civic commitment to Russian imperial patriotism.  Late in life, when pressed by the Russians to declare unambiguously his one and true allegiance, Gogol chose to fudge the question, claiming that the Russian and Ukrainian sides of his soul mutually enriched each other.  No other cultural figure posed the contestable claims of both Russian and Ukrainian nationalisms, and of their interdependence, with as much complexity and lasting relevance as Gogol.

His desperate efforts to cater to the nationalistic expectations placed on him by the Russian public led him, in 1842, to Russify his own tale about the Ukrainian Cossacks, Taras Bulba (1835), tempering the original’s Ukrainian nationalist fervor.  The 1842 Taras Bulba, long regarded in Russia as canonical, became, in 2009, the subject of the biggest-budget post-Soviet film production by the same title.  Partly financed by the state, the film was a paean to the confluence of the supposedly fraternal Russian and Ukrainian nations.  In the same year, Ukrainians put out a smaller T.V. production of the Ukrainophile 1835 version.  In a sense, neither version was wrong, since Gogol himself set the precedent for the nationalistic reengineering of his own narrative.  Already in 2009, this cinematic duel highlighted the growing divide between a pro-Western Ukraine and Putin’s Russia.

Hybrid identities such as Gogol’s came under assault with the rise of Russian ethnic nationalism in the mid-nineteenth century.  The tsarist government persecuted the resistant Ukrainian identity with particular vigor.  Ukraine was the testing ground for the future policy of Russification.  The history of Ukrainian lands and peoples became reduced to a tributary of Russian history. A Ukrainian nation was viewed as apostasy within Russia.  The Ukrainian language, downgraded to the status of a dialect (despite a population of ten million speakers), was banned from schools; tsar Alexander II’s edicts proscribed it from print altogether.  The ban was reversed only after the Bolshevik revolution.  After initial promotion of “local” languages, the language of social advancement of the Soviet Union soon became Russian.  The Russian Federation’s intention to “defend the rights” of Russian speakers in the ex-Soviet states, is widely seen in these states as a tool in a larger and more cynical political game.  In this context, it is little wonder that Ukrainians have tended to treat their language as an insurance policy on political independence, misguided and flawed though it is as a political project for today’s Ukraine.

Though he spoke idiomatic Ukrainian, Gogol himself wrote his literary works in Russian, the language of the empire.  The Russian of his works on Ukrainian themes, however, is so Ukrainianized as to be barely readable without a Ukrainian dictionary.  Gogol supplied his own glossaries to his early stories, similar to the Scottish glossaries that accompany Sir Walter Scott’s fiction.  Interestingly, his use of Russian did not prevent early Russian reviewers from identifying Gogol as an emanation of Ukrainian, not Russian, culture.  Only later, when his literary talents were beyond dispute, did the Russian critics reclassify Gogol from a Ukrainian chrysalis to a Russian butterfly.

The opposite rebranding occasionally ensued, whenever Gogol’s devotion to Russian nationalism appeared in question. And it did so following the now vaunted nationalist epic, Dead Souls.  Removing the rose-tinted spectacles of Russian nationalism allows one to actually see the work as a parody of a nationalistic novel.  The celebrated troika-Russia is a profoundly ambiguous image.  For what gives rise to it in the main plotline is a decrepit equipage drawn by an inharmonious team of three nags that carry a con-man escaping tar and feathers.  The direction of Russia’s headlong surge is unknown: has it neglected to ponder its destination? Could it be headed to a blind alley?  Gogol’s Russia remains an unstable enigma and an unpredictable force.  The narrator pleads:  “Russia, whither are you rushing?  Answer!  It gives no answer.”

As we witness the state with the largest army in Europe stoke virulent nationalism in the Russians both within and outside of its borders, these hooves remain suspended, the question as urgent as ever.