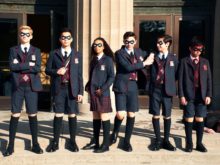 This is the sixth installment of “Rereading Akunin” focusing on The Winter Queen.  For the introduction to the series, and subsequent installments, go here.

Erast Fandorin dropping by an orphanage is a bit like Yogi Bear seeing his ursine cousins at the zoo: the visitor and the visited belong to the same species, yet the contrast between the institutionally confined and the free-range specimens is vast.

Fandorin’s own orphan background is not initially helpful.  When he arrives at Astair House, Erast Petrovich has his usual problems with gatekeepers.  No one in this novel a) wants to let him in, and b) believes he is a police detective.  In fact, it is in his professional capacity that he seems most like an orphan, with no effective father figure until Brilling shows up.

Nor does anyone seem to believe he might be able to speak a foreign language; he has to insist that he not only knows French, but can even speak English. His facility with the latter language is thanks to the tutelage of Nanny Lizbet, who also inculcated good habits and discipline (rising at half past 6 to do calisthenics, sponging himself off with cold water, and brushing his teeth two hundred times).  These are minor details, but they remind us that, as a detective, Fandorin’s pedigree is as much British as it is Russian.  Though he may grow up to be a Russian Poirot (yes, Poirot was Belgian, but his creator was not), for now he is something of a Miss Marple, underestimated by everyone around him.

This is important not just as a plot point, but as a feature of Fandorin’s character.  Except for Brilling, everyone underestimates him.  Which is why meeting Lady Astair is so important; she is uniquely equipped to recognize hidden talents.

Lady Astair lets him in: “Better sit over there in the armchair—you’ll be more comfortable” (let’s just say that this suggestion seems more significant reading the book for a second time).  After learning that both Fandorin’s parents are dead, Lady Astair explains her philosophy of education:  “I am profoundly convinced that every individual possess a unique talent.”

Lady Astair’s benevolent work with orphan boys takes on extra resonance in the late 1990s, when the book was first published.  Though the Dima Yakovlev Law banning foreign adoption was decades away, the controversy leading up to it had been brewing since the collapse of the USSR. On one side, we had the sentimental narrative of selfless Western parents giving a home to Russian children no one else wanted; on the other, we had what started as deep suspicion of anyone with supposedly selfless motives (suspicion engendered by decades of Soviet cynicism and several years of post-Soviet disillusionment).  What is it these people really want?  To abuse or neglect them (as happened in several spectacular cases)? To supplement their degenerate gene pool with the glorious phenotypic expressions of Russian DNA (never mind the fact that virtually any child who was technically adoptable had to be classified as an “invalid”)?  To raise a generation of Russians to hate the Motherland?

Given that Akunin’s most famous literary project stars an orphan hero, we should not be surprised to see these concerns reflected in the Fandorin novels, however obliquely.  Knowing Akunin’s famously liberal politics, it would seem highly unlikely that he subscribed to any of the conspiracy theories that attached themselves, barnacle-like, to the transnational adoption saga.  And yet two important features of this already-current political issue do find their way into The Winter Queen.  And here we are also venturing into spoiler territory.

The first is the question of noble intent.  Fandorin expresses some suspicion of Lady Astair, which Brilling immediately shoots down.  When he arrives at the Astair House, he is primed for suspicion, but, as with his visit to Lizanka and Bezhetskaya, Fandorin is immediately charmed by his hostess.  More to the point, everything about Astair House seems to be on the up-and-up (with the possible exception of the strange seizure that strikes one of the residents).  SPOILER ALERT: It’s not.  END SPOILER.

The second comes up when Fandorin expresses mild doubt that nine out of ten children possess a special talent.  Lady Astair asserts that

those children who today are regarded as mentally backward also possess a gift. It is, of course, not a gift of a rational nature but is nonetheless precious for all that. In Sheffield I have a special Astair House for those whom traditional pedagogy has rejected.

As a parent of an autistic child, I’ve been immersed in the excesses of New Age parenting:  “Indigo” children, hyperbaric oxygen chambers, dolphin therapy, anti-vaccine paranoia—the works.  I’ve had people ask me what my autistic child’s “special gift” is (flapping? running in circles?), and even one parent congratulating me because my son will someday get into MIT (another spoiler: no, he won’t).  It’s a set of very tedious tropes, and Lady Astair invokes nearly all of them:

My God, what miracles of genius those boys demonstrate! There is a child there, who at the age of thirteen has barely learned to talk, but he cures any migraine with the touch of his hand. Another, who is entirely incapable of verbal communication, can hold his breath for an entire four and a half minutes. A third can heat a glass of water simply by looking at it— can you imagine?

Yes. Yes, I can. I’ve read Jenny McCarthy.  But I’m less than thrilled. On its own, this example is just tedious.  Plus, we don’t know if we’re supposed to believe it’s real.  But when we combine it with other examples of disability in Akunin’s work, the picture is dreary (more on that in a later post).

What makes all this interesting is how it connects to several potentially relevant discourses:  the sentimental orphan narrative (a foreign woman is saving special-needs children!), the Soviet redemptive pedagogy narrative (children are human material that can be reforged), and, [SPOILER]  the Janissary narrative (“they” are taking “our” children and building an enemy army). [END SPOILER]

So far, though, Fandorin is impressed.  And why shouldn’t he be? As an orphan himself, he’s the perfect audience.  Lady Astair is the savior every orphan boy presumably dreams of.  Or, to switch to more recent popular culture, she is the mentor for every freak child who dreams of acceptance and glory. Lady Astair is Professor Xavier, running his school for gifted Youngers, training mutant outcasts to thrive in a world that hates and fears them. Or perhaps she is more like The Umbrella Academy‘s Sir Reginal Hargreeves, the British/extraterrestrial headmaster molding selected young freaks into a superpowered team to face an unspecified threat.   Either way, what could possibly go wrong?