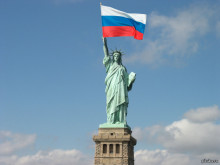 There have been a number of attempts to redefine her location. In the 17th century, when the borders of the colonies were being redrawn, a captain named Billopp was told that all island he could sail around within 24 hours would be in the jurisdiction of New York. Liberty Island fell within that line.

In 1987, the Mayor of Jersey City Gerald McCann tired to bring to a court a suit that said that Liberty Island fell on the Jersey state line. The slot of land was the only land in the country in fact surrounded on all sides by a different state from the one in which it was located. The case could not be heard in court.

New York is New Jersey’s big brother, and even Phili-influenced South Jersey often has roots in the, pardon by roughness here, the “real” city of New York.

Which bring me to my point: Patriotism. I have been hearing a lot of unexpected defenses of the annexation of Crimea from Russians, from people who I would expect to express opposite opinions on such matters of sovereignty and Kremlin influence.

A lot of common things I have been hearing to justify the annexation of Crimea:

– Ethnic Russians live there and we must protect them

-Crimea was always a part of Russia until 1954, and since Ukraine is the Soviet Union was really just big Russia, it has only been away from its rightful owner for about 20 years

-Ukraine and Russia originated from one people, so what’s the difference?

-Whether it’s fair or legal or not, it’s over, so what’s the use in complaining about it?

-If it’s good for Russia and nobody gets hurt then what’s the big deal?

I will not provide counterpoints to these suggestions. I have been most surprised to see people approaching the situation as though Crimea were a long-disputed territory. When Abkhazia and South Ossetia came under de-facto Russian control in the 2008 Georgia war, it was not such a shock. Those territories had long-standing breakaway movements, and their statuses were changed during a war.

But Crimea “has always really been part of Russia” only after it had already been annexed. That is, the sentiment that some parts of Ukraine are really Russia was not an issue of such gravity until after they saw a chance to make a move. And so too was the argument used for the Statue of Liberty. In each case when the sovereignty of Lady Liberty has been challenged, she has always sided with New York. The reason is because she has always been part of New York. She is a symbol of New York. What would New York be without her? Anyway, it’s over. She chose the big Apple and it’s a democracy: the majority wants it this way.

Could the Giants or the Jets, who in fact play in New Jersey become the New Jersey Giants? Like Russians driving to Crimea on summer vacation, New Yorkers pack into their Ford Explorers for road trips to the Giants game, and drive 3 or 4 hours home just after the last touchdown, spending a drop of tourist money and leaving nothing but puddles of ketchup and sweaty blue warpaint. The Nets packed up their bags, and you don’t hear anyone in Brooklyn complaining that we are depriving Jersey of her sports teams. Maybe it’s because we’re not listening… but I don’t hear anyone.

This surge of Patriotism in Russia is familiar to me in the way that I am a Patriot for New York. Russian people, especially those who get their new from the internet, tend to be aware. One person recently told me. “The thing is that in Russia you never feel like you’re really protected. In America, people feel protected, that the law will help them.”

Conversations like that invariably turn to New York. How could I tear myself from New York, home of Carrie Bradshaw, the Sex In the Big City, skyscrapers, pizza and Chinese food? I always give the same answer: The Rent is insane, everything is expensive, New York, especially under Mayor Bloomberg has become a playground for the super-Rich, there is constant pressure to look good and be successful, and show off that success, you feel like you’re always worthless, always missing out on something cooler and for any job there is huge competition and one must be constantly working to make ends meet.

So people ask, New York isn’t as good as they say?

For Russian patriotism, I see an analogue. Ask a Russian person if they are happy with the way things are going and they’ll say, “Our economy is tied to the price of oil, independent media is shrinking like an old man’s spinal cartilage, we don’t manufacture anything, there is corruption, life expectancy is low, and you feel that the rules don’t always help you.”

So you don’t want to live in Russia?

“Rules? To hell with rules! What do I need rules for? This is the only place where people really care about each other.”

Now let’s say, you’re a native New Yorker. Born into the scaled down Super-Life of the Upper West Side, your grandparents are old-money socialites who taught Literary Criticism at Columbia. Hard times have come– Grandpa has been forced to take a Professor Emeritus position at the CUNY Graduate Center (public education doesn’t have the same ring to it) and your parents are moonlighting at state hospitals just to make ends meet.

And you, 200,000 dollars in debt from going to a certain prestigious but hella-expensive downtown University, are forced to confront your worse nightmare. You’re moving to Jersey City.

So there’s the PATH train, it’s actually faster to get to the center of Manhattan than from most parts of Brooklyn. And the public schools are really good! But still, you feel the attraction of New York. The bagels and the pizza are just as good: people, you know, they still say Couffee and Douwg and everything seems okay. There’s more space. So you’re not allowed to pump your own gas and you live in the same state as the New Jersey Turnpike but nobody’s perfect.

Let’s say, just a thought experiment, that the Governor of New Jersey is a fat corrupt slob whose scandals everyone knows about but is, for some reason, the star of his political party and well enough protected by big money in neighboring New York and refuses to resign.

And people have had enough, they go out on the streets of Trenton and have him overthrown! Hurrah! Freedom.

Except you don’t live in Trenton. And those people who live in South Jersey, the Cherry Hillers, the Trentonites, they have their own plans. They even like New Jersey!

In your understanding New Jersey is place you end up, not a place you voluntarily go to. They don’t want to be so dependent on New York, have everyone commute there, live inside the metrobubble. Jersey City has grown on you in the 15 years you’ve been living here, and you have kind of forgotten– New York, New Jersey… what’s the difference? You’re just glad that corrupt reactionary is out office.

But it’s not all the same to everyone. People want to develop New Jersey. People don’t want to spend all the state’s money opening roads for you to get to New York [and then closing them to wield to political power against rebelling progressives], to send your money to New York and to work in New York. They want to develop Jersey. But you’re a New Yorker! Sure Jersey has some nice beaches… and it’s been your home for a fifteen years. And your kids grew up here. You can take the city kid out of the city but…

You have a decision to make. And if it seemed to you you could stay under New York’s protection, where your grandparents and cousins still live, where you know not getting on the 1 train then taking the 2 uptown and switching to the 1 will actually save you 10 minutes, would you want to?

On the other hand, Jersey is part of your home now, you understanding of home. What about those Native New Jersey people who only know about full-service gas stations? New Jersey has got a lot of potential to develop, especially with the help of investment from some mid-Western States.

And your grandmother calls you from her 15th floor 3-room apartment on 105th st. “Is everything okay down there in New Jersey, sonny? The things they’ve been showing on The News…I’m scared for you. Come home?”

Now it would be something else if all news sources on both sides were calling your decision part of The New Cold War and that Right-Wing Jersey Fascists are roaming Jersey City looking to beat up all New Yorkers.

With pro-Russian protestors seizing buildings in Eastern Ukraine, the situation is once again complicating. The people of Donetsk have familial and cultural ties to Russia that are perhaps stronger than a judicious evaluation of what would be best for them and their families. The schism in opinion is not just about geography, but age. An older generation remembers The Soviet Union, and young people remember only Ukraine. The idea of who these people are is straddled across two lands and four generations. It would be interesting to ask the children of the person in the thought experiment above what they thought. If you grew up in Jersey City, would you call yourself a New Yorker? Even with your family there, do you have the same understanding of heritage as your parents if the PATH is more familiar than the 1 train? If you call yourself a patriot, then for whom?