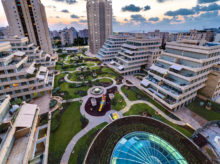 This post is the second in a series that begins here.

On Tuesday 02/13, the Russian-Israeli flash fiction author and Runet pioneer Linor Goralik will appear at NYU’s Jordan Center to  discuss Found Life, a collected volume in translation co-edited by Ainsley Morse, Maria Vassileva, and Maya Vinokour. In anticipation of her visit, All the Russias will be running excerpts from Found Life throughout this week. In addition, we’ll be featuring excerpts from Goralik’s online comic strip, Bunnypuss, at the bottom of every post.

You’re going to Israel for a month and a half and looking for an apartment—online to start. You sort through the initial options. The majority of apartments on the internet, intended for short-term lease, have exactly one feature: “Close to the beach.” Someone with a fear of sand, bright light, and dolphins has to deal with hints, halfhints, and photos taken from strange angles. (With most shots, it’s not hard to guess that the photographer is trying to do his work without getting up from the sofa; that shadow looming across every shot belongs to his wife, who’s been chewing his ear off about the necessity of posting an online ad because we’re leaving in a week, the day after tomorrow, in an hour, “the taxi’s waiting downstairs!”)  I’ve been living in Israel on and off for the past ten years, either staying with my parents or, if it’s for work, in a hotel; accordingly, I haven’t looked for an apartment for about twelve years. But like all expats, I feel both aggressive and sentimental about my homeland. I love everything and nothing satisfies me. That is, I always want an apartment in a neighborhood that’s enchanting, lively, quiet, empty, crowded, right by the sea, a ways from the beach, with a quirky layout, the simpler the better, in a very interesting area, directly over a supermarket, right next to a nice restaurant, close to fast-food falafel—and so on. Meanwhile, the television is constantly informing the world that the situation with apartments in Israel is a total nightmare, that there’s nowhere to live, prices are hellacious, and all that. In a panic, you start asking your friends for advice. Friend X, who has just sold one apartment in Tel Aviv and bought another, tells you, “Don’t sweat it, dude. True, it’ll be really expensive, but it’ll work out. Worst-case scenario, you’ll live in a tent, it’s really trendy these days, there’s tent protests against high rent, people have been living in tents for months already, we go there to smoke weed.” I rifle through online ads. I turn up a surprising number of posts with mind-boggling apartments for ridiculously little money. I send X the links. “I dunno,” X says warily, “maybe they’re brothels?” A brothel would never take me, I’m too old. The specter of a tent appears before me; it’s 90 degrees outside and I don’t smoke that much. I arrive, leave my suitcase at my parents’, and go look at apartments. Mom insists that I take a gas mask with me. It occurs to me that if you live in a tent right in the middle of Rothschild Boulevard, a gas mask might not be such a bad idea.

A charming, cozy, bright apartment in Ramat Aviv, one of the most off-the-hook neighborhoods in Tel Aviv. The owners are departing on a diplomatic mission to Sweden and renting it for really cheap—they don’t need money, they need a cultured tenant with a love of lame rabbits. The rabbit’s name is Ehrlich, after the  owner’s first wife’s maiden name. He has a crazy appetite—given the chance, he’ll eat you out of house and home. Ehrlich devours everything: the carpet, a porcelain statue from the golden age of Bauhaus, a chair leg. The universe, with its perverse sense of humor, has conspired to make the lacquer on the antique chair leg do something to the rabbit’s nervous system that paralyzes his right hind leg. The rabbit drags it behind him, like Lord Chesterfield proudly demonstrating to the world his aristocratic case of gout, acquired through an excessive consumption of Rheinwein and Tokay. The rabbit needs looking after—and that’s how you pay for an amazing apartment in an amazing neighborhood with an amazing Jacuzzi, amazing Bauhaus features, and a widescreen TV of amazing proportions. The owners themselves can’t believe how lucky you are to take care of such an incredible, gouty rabbit. Wash him twice a day, no need for more; injections six times per day—he has a vitamin deficiency; he eats only fresh foods, and don’t give him artichokes, they make him pee and poop. The rabbit looks at you with gloomy crimson eyes, slightly pulling back his upper lip. His frightening long teeth sparkle in the light of an amazing Tiffany lamp. The rabbit conveys to you that you can’t even imagine how and what he pees and poops—but soon you will. In anguish, you ask to see the Jacuzzi one more time, just because; it’s like looking at a beautiful woman whom you’re fated never to touch, or a museum statue in a city from which you’re being driven for drawing a penis on their proud coat of arms in the central square. You’re so sorry to part with the amazing owners that you nearly cry. Ehrlich trails you all the way to the door. He’s made it very clear to you who lives here and who doesn’t.

Bunnypuss of the Day (translated by Giulia Dossi and Abigail Weil)