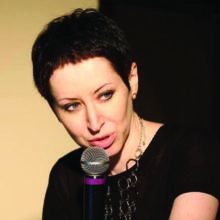 On Tuesday 02/13, the Russian-Israeli flash fiction author and Runet pioneer Linor Goralik will appear at NYU’s Jordan Center to discuss Found Life, a collected volume in translation co-edited by Ainsley Morse, Maria Vassileva, and Maya Vinokour. In anticipation of her visit, All the Russias will be running excerpts from Found Life throughout this week. In addition, we’ll be featuring selections from Goralik’s online comic strip, Bunnypuss, at the bottom of every post.

Today’s segment derives from a cycle of short prose entitled “She Said, He Said,” translated by Ainsley Morse and Maya Vinokour

—. . . five-twenty, they repeated it a hundred times afterwards, five-twenty a.m. She woke me up screaming: “The baby’s gone.” He was four months old, like, a little over four months. Well, so that was that, we spent the whole day, like, you can imagine. The baby isn’t in the apartment, right? The police, those, you know, detectives. I thought I was going to die. The things I was thinking about, let me tell you. I don’t want to say it out loud, but you pretty much get the picture, right? So, the police were there all day, of course, obviously they’re interrogating us. Her, me. Anyway. I was crying so fucking hard, I’m telling you, like where you can’t breathe, like “uhhh. . . . uhhhh.” Sat down in the corner and like rocked back and forth. Went at one of the cops . . . No, well, like I tried, I took a swing at him. The questions they were asking. As if you aren’t thinking all that stuff yourself. At one in the morning we went into our building, got home. I couldn’t even turn on the lights, you know? Such a wreck. And then she said: “OK, here’s the truth. The baby’s with my aunt. I just wanted to show you that you’re the kind of father where you can take the baby out of the apartment and you don’t even wake up.” You see? I was that kind of father. With the second one, with our daughter, it was better, it was different. I made way more of an effort.

— . . . was crying, Marina was crying, I was crying, Voloshina had basically dissolved in tears, but Tushevskaya wasn’t crying. She caught the bouquet and when they brought the cake she said: “Oh, give me a big piece, you know, I eat so much and somehow I just can’t gain the weight back!” That’s what Tushevskaya’s like. I think if you’re a widow it still doesn’t give you the right to shit all over people.

— . . . not my business, of course, I’m just the driver, you don’t have to answer or anything, but let me tell you: you were just asking someone over the phone: “What for?” or like “Why?” I’m just saying, you don’t have to give me an answer: I know just what you mean. A year ago now I said to myself: “You’ll be thirty-two next year. If a man still has questions at thirty-two, he’s an idiot, a waste of space, he doesn’t deserve to live, no one can live like that.” And I started answering all my questions, posing every question and answering it, for several days, even a week, one after another. “Why are we here?” I thought about it and figured it out. “Why are women”—well, why are they like that and not some other way. Thought about it— figured it out. Then, like: “What does a man owe his children?”— answered it. And now I just turned thirty-two, in September, and I don’t have any more questions, none. Well, I’m not talking about practical questions, those still come up, obviously. But all the questions relating to the soul and not the body—I thought about all of them and figured them out. What are the practical questions? Like, the ones you can answer or not answer, it won’t really change anything, won’t change your soul. Like, here, I had this parrot, and you know, they live a long time. Well, he died, like, he was sitting on my shoulder and all of a sudden I thought he’d flown off, but then I felt his claws on my back—he’d fallen backwards. Well, I even, you know, I even cried. He lived a long time. So I couldn’t throw him out, I put him in a plastic box and buried him at my dacha. So, it’s  been years now, and when we have those warm days, you know, like the last ones in the season, when you’re closing up the dacha for the winter, I dig him up and take a look: he hasn’t decomposed. Why hasn’t he decomposed? That’s a practical question. It’s a good question, but a practical one.

— . . . I can’t agree with your dad. I’m not sure that you’re supposed to hate a person, even someone who has done very bad things. Really, this is a very old conversation, there’s even a saying: “Love the sinner, hate the sin.” But to put it simply, hating a person is a very strong feeling, and not a good one. I tell myself: if someone put that person in front of me right now and gave me a pistol, would I be able to kill him? And I think, no, thank God, I wouldn’t. And that means I don’t hate that person. I can dislike him, scorn him, blame him for all sorts of things, sure, but I don’t hate him. But if I think, yes, I’d kill him, it means I have to ask myself—why? After all, it’s bad to kill people, right? So it means I have to start working on myself, it’s a problem inside me and not in the other person, I’m the one that’s bad, not him, since I want to kill another person . . . But you know, Sasha, really, don’t listen to me, I’ve got cobwebs in my head, don’t pay any attention to me. Your dad has it right: we hate Putin, Putin’s bad. Don’t listen to me, listen to your dad.

Bunnypuss of the Day (translated by Giulia Dossi and Abigail Weil)